Project aims getting Urartian works back

Van’s Yüzüncü Yıl University has made a catalogue for the return of some 200 smuggled Urartian artifacts from foreign museums, and delivered it to the Culture and Tourism Ministry Directorate of Monuments and Museums. The goal is to bring them to Van, where they belong 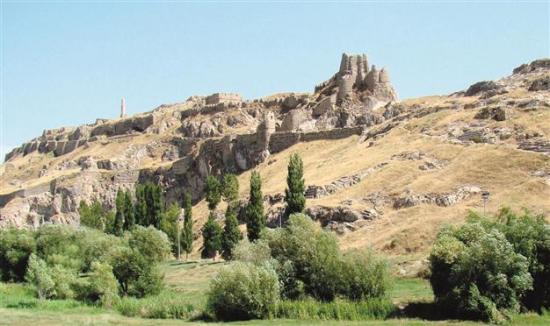 The Fortress of Van, built by the ancient kingdom of Urartu. AA photo

A concrete step has been taken for the return of Urartian artifacts that have been smuggled from the eastern province of Van, the capital of the Urartian civilization. A new project aims to bring back objects like cuneiform tablets, jewelry and war materials that shed light on history of the region, but were taken abroad through illegal means.

As a result of research conducted by the Van Yüzüncü Yıl University (YYU) Archaeology Department, nearly 200 artifacts, which were found on display in museums abroad, were gathered in a catalogue with their homeland and inventory number, and delivered to the Culture and Tourism Ministry Directorate of Monuments and Museums.

Head of YYU Archaeology Department Associate Professor Rafet Çavuşoğlu said Van and its vicinity was rich in terms of Urartian and other civilizations’ artifacts, and their goal was to bring those artifacts back to Van, where they belong.

He said an important portion of the smuggled artifacts had been found by treasure hunters and illegal excavators around Toprakkale.

“According to some academics, Toprakkale is the second capital of the Urartians and for some it is their religious center. A lot of excavations were carried out in the Mesopotamia region in the 19th century to find artifacts for European museums. Illegal excavators came to Van for this purpose. AGerman started the first research in Van. He took a copy of cuneiform tablets and sent them to France. A historical artifact smuggler showed 15 to 30-centimeter-long statuettes to English archaeologist Henry Layard.

After determining their origin, Layard bought these pieces on behalf of the British Museum. Later, Layard and his assistant performed excavations in Van between 1877 and 1880 and took the artifacts they found here to England for the British Museum,” said Çavuşoğlu.

He claimed Germans, who were taken by the richness of Urartian artifacts in the region, came to Van in the 1890s to carry out excavations in Toprakkale and took the artifacts to the Berlin Pergamon Museum, adding that the museum’s record inventory confirmed it.

Following the Germans, Russians also came to the region and smuggled important historical artifacts, said Çavuşoğlu, and continued: “Our goal is the return of Toprakkale’s artifacts. We have even determined the inventory of these artifacts in the catalogue. There is no doubt they were smuggled from Toprakkale and belong to Van. There are some 200 artifacts. We have applied to display these artifacts in the Urartian museum, which will be opened.”

Çavuşoğlu noted that some countries did not share the information about the artifacts, so they did not know the number of Van’s artifacts in those countries.

“Many museums in the world display Urartian artifacts smuggled from Van, he said, and added, “Even Japan has Urartian artifacts. Urartian vaults are in Japanese museums. There are also artifacts in American, Israeli, Russian and other European museums. We want them to be returned to us. There are votive plaques in Giyimli village of Gürpınar district. More than 3,000 votive plaques have been smuggled and most of them are being displayed in Germany. We did not include them in the catalogue because we had some questions about them.”

He said that the artifacts could be returned with the scope of two international agreements and they would make great contributions to Van’s economy and culture in the case that they are returned.