The leading cause of death in the developed world also afflicted our early ancestors, indicating there's more to it than modern lifestyles

Like nearly 4.6 million Americans, ancient hunter-gatherers also suffered from clogged arteries, revealing that the plaque build-up causing blood clots, heart attacks and strokes is not just a result of fatty diets or couch potato habits, according to new research in the journal The Lancet.

The researchers performed CT scans of 137 mummies from across four continents and found artery plaque in every single population studied, from preagricultual hunter-gatherers in the Aleutian Islands to the ancient Puebloans of southwestern United States.

Their findings provide an important twist to our understanding of atherosclerotic vascular disease, which is the leading cause of death in the developed world: while modern lifestyles can accelerate the development of plaque on our arteries, the prevalence of the disease across human history shows it may have a more basic connection to inflammation and aging.

"This is not a disease only of modern circumstance but a basic feature of human aging in all populations," said Caleb Finch, USC University Professor, ARCO/ Kieschnick Professor of Gerontology at the USC Davis School of Gerontology, and a senior author of the study. "Turns out even a Bronze Age guy from 5,000 years ago had calcified, carotid arteries," Finch said, referring to Otzi the Iceman, a natural mummy who lived around 3200 BCE and was discovered frozen in a glacier in the Italian Alps in 1991.

With Gregory Thomas of Long Beach Memorial, Finch was part of a team that previously showed Egyptian mummies had calcified patches on their arteries indicative of advanced atherosclerosis (from the Greek arthero, meaning "gruel" and scler, meaning "hard").

But ancient Egyptians tended to mummify only royalty or those who had privileged lives. The new study led by Thomas and Randall Thompson of Saint Luke's Mid America Heart Institute examined mummies from four drastically different climates and diets – and from cultures that mummified regular people, including ancient Peruvians, Ancestral Puebloans, the Unangans of the Aleutian Islands and ancient Egyptians.

"Our research shows that we are all at risk for atherosclerosis, the disease that causes heart attacks and strokes – all races, diets and lifestyles," said Thomas, medical director of the MemorialCare Heart & Vascular Institute, Long Beach Memorial. "Because of this we all need to be cautious of our diet, weight and exercise to minimize its impact. The data gathered about individuals from the pre-historic cultures of ancient Peru and the Native Americans living along the Colorado River and the Unangan of the Aleutian Islands is forcing us to think outside the box and look for other factors that may cause heart disease."

Overall, the researchers found probable or definite atherosclerosis in 34 percent of the mummies studied, with calcification of arteries more pronounced in the mummies that were older at time of death. Artherosclerosis was equally common in mummies identified as male or female.

"We found that heart disease is a serial killer that has been stalking mankind for thousands of years," Thompson said. "In the last century, atherosclerotic vascular disease has replaced infectious disease as the leading cause of death across the developed world. A common assumption is that the rise in levels of atherosclerosis is predominantly lifestyle-related, and that if modern humans could emulate pre-industrial or even pre-agricultural lifestyles, that atherosclerosis, or at least its clinical manifestations, would be avoided. Our findings seem to cast doubt on that assumption, and at the very least, we think they suggest that our understanding of the causes of atherosclerosis is incomplete, and that it might be somehow inherent to the process of human aging."

The international team of researchers will next seek to biopsy ancient mummies to get a better understanding of the role chronic infection, inflammation and genetics in promoting the prevalence of atherosclerosis.

"Atherosclerosis starts very early in life. In the United States, most kids have little bumps on their arteries. Even stillbirths have little tiny nests of inflammatory cells. But environmental factors can accelerate this process," Finch said, pointing to studies that show larger plaques in children exposed to household tobacco smoking or who are obese. 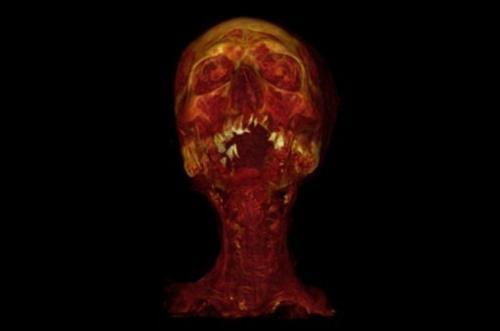 Image provided by the Lancet press office on March 8, 2013 shows a CT with 3D volume rendering of Hatiay, a mummified male Egyptian scribe aged 40-50 years, who lived during the New Kingdom (1570–1293 BCE) and was found near modern day Luxor. Scans of mummies from as long ago as 2,000 BC have revealed that ancient people also had clogged arteries, a study said Monday. 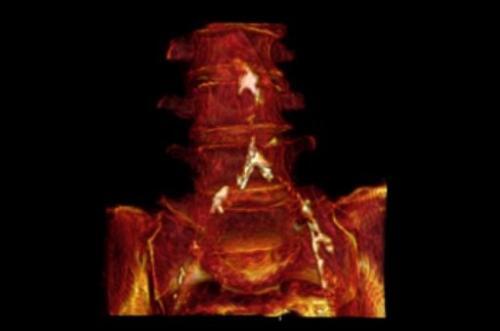 Image provided by the Lancet press office on March 8, 2013 shows a CT with 3D volume rendering of the aortic and iliac calcification in a mummified woman aged 45-50, of an unknown era in ancient Egypt, who was found in the Fayoum Oasis. A study of 137 mummies from four geographic regions has revealed that atherosclerosis may have been more common among ancient people than previously thought. 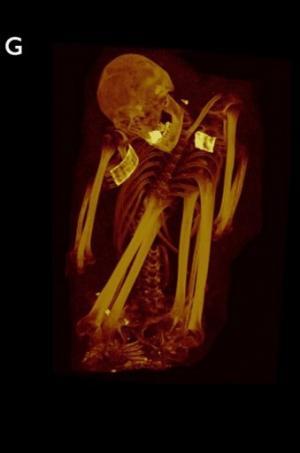 Image provided by the Lancet press office on March 8, 2013 shows a 3D MIP of a mummified woman from ancient Peru, aged 41-44, of the Early intermediate to Middle Horizon (200–900 CE), that was excavated from Huallamarca, Peru. A study released Monday has revealed that ancient people also had clogged arteries.