Men in prehistoric Europe manipulated their privates with body art and piercings in ritual and to just fit in. 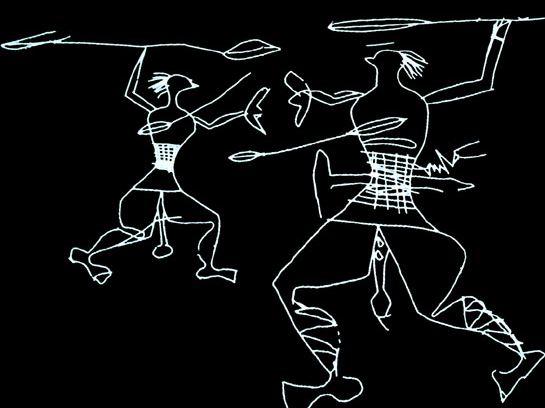 Men in prehistoric Europe scarred, pierced and tattooed their penises, likely for ritualistic and social group reasons, according to a new study.

Analysis of phallic decorations in Paleolithic art, described in the December issue of The Journal of Urology, may also show evidence of the world's first known surgery performed on a male genital organ. The alteration, or surgery, might have just been for ornamental purposes, or a piercing, the researchers suggest. 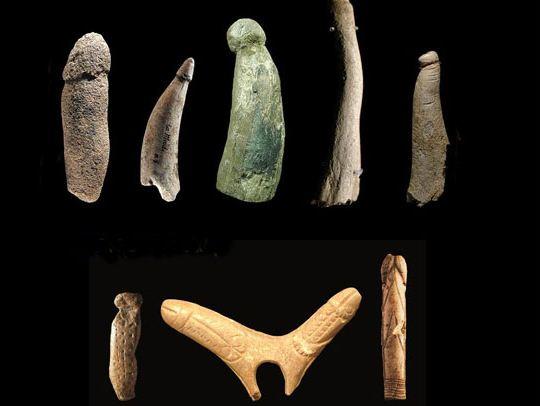 Phallic decoration became prevalent among men of the Magdalenian culture in France and Spain about 12,000 years ago, according to a study in The Journal of Urology. Analysis of the mostly hand-held art excavated from sites in France, Spain, Germany and the Ukraine shows that most of it was created in Europe approximately 38,000 years ago. Pictured here are several portable phallic pieces. The top line shows totally retracted or absent foreskin on the art pieces. The second line shows a replication of piercing, scaring and tattooing. – Javier Angulo.

Lead author Javier Angulo, chair of the Department of Urology at Hospital Universitario de Getafe in Spain, explains that, like today, tattooing and manipulation of body parts have always functioned as a way for people to express themselves.

"[People] may feel that scars are a written story on the skin," he said.

"Making scars, holes to pick bones, and also writing on the skin -- tattooing -- may add meaning to an otherwise 'silly body,'" he added. "If one or several marks became popular or fashionable, they may be culturally elected as 'fancy' and 'desirable.' The face and areas around natural orifices are parts of the body with a higher tendency to be decorated and shown." 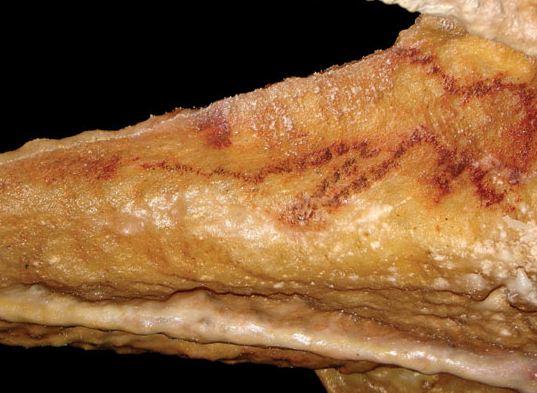 Here is a small, hand-held piece of phallic art with a drawing on it. This was found in Tito Bustillo in Ribadesella, Spain. Javier Angulo .

Angulo and colleagues Marcos García-Díez and Marc Martínez studied male genital representations in portable, mostly handheld sizes of art made in Europe approximately 38,000 to 11,000 years ago.

The pieces, researchers say, frequently mirrored what actually appeared on the male penis. Paleolithic art is known to be very naturalistic, so the artists were recreating what they saw.

Additionally, Angulo said that "Otzi and some mummies confirm tattoos were on their skin."

"Modern primitives did modify their bodies, including their genitals, with the use of tattooing, perforations and cuttings (scars) to change their appearance," Angulo said.

They therefore believe it is "highly probable that the marks left on these phalli are not decorative for the sake of the piece of art but rather a depiction of real-life details."

Many of the marks are geometric shapes, such as triangles or circles. Some designs appear to match those of figures seen within Paleolithic cave art from the same regions. This suggests that the symbols may have held important meanings for people then.

"It is widely understood that these designs are part of an unknown code," Angulo said, adding that some of them might have been made exclusively for a decorative purpose. Tattoos today follow the same coda, for the most part. A lion tattoo on a man's arm may only mean that the man likes the look, not that the lion means anything special to him.

Angulo added that other possible explanations for the symbols include: "territorial signs or landmarks, shamanistic repetitive marks in the passage to an unconscious world, some forms of primitive counting, the investigation of non-figurative artistic expression playing with spaces and light and darkness…Who knows?"

What is clear is that phallic decoration became more prevalent among men of the Magdalenian Culture in France and Spain about 12,000 years ago.

"That could be part of a cultural phenomenon related to a concrete time and space," Angulo said.

Another finding of the study is that prehistoric men seemed to favor preputial retraction, or drawing back of the foreskin. As a result, the scientists think it's likely that early males practiced circumcision as both a way to prevent disease and for affiliation purposes. To this day, ritual or religious circumcisions occur within several cultures.

For the prehistoric cultures, Angulo believes that their "canon of beauty” changed over time. Earlier humans of the Gravettian culture, known for characteristic tools such as carving blades, appear to have favored more exaggerated depictions of sexuality, as is evident in many of their "Venus" figurines of naked women. The Magdalenians, on the other hand, had a more naturalistic concept of beauty, according to the authors.

For a separate study, Liam Brady of Monash University's Center for Australian Indigenous Studies, looked at early body art in Australia. He told Discovery News that such research might provide clues into the mindset and actions of early cultures.

Brady explained, "Distinctive design conventions can be considered markers of social interaction so, in a way (they are) a cultural signature of sorts that archaeologists can use to understand ways people were interacting in the past."

The past may additionally be tied to the present, as Angulo and his team suspect that the Paleolithic phallic art may show the anthropological origin of current male genital piercing and tattooing.