Mythology of twins is one of the richest in world culture. There is also a specific category of conjoined twins in prehistoric art which usually has been interpreted as a result of artistic imaginary in combination with possible exotic myths. However the contemporary human culture shares the experience of conjoined twins, one of the most amazing examples of which are Abby and Brittany Hensen.

It is interesting to note that the 32 prehistoric 'Ain Ghazal statues which are 9 millennia old and among the most valuable archaeological discoveries in later 20th century include a stature of conjoined female twin : 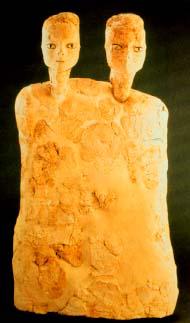 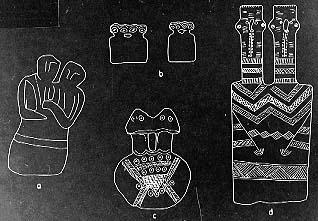 Abby and Brittany Hensen shows us that not only the goddesses, but also the human nature is gifted with strong superpower and positive energy. Probably in prehistory they would be treated like goddesses or witches. Although it is difficult to interpret prehistoric art in context of ordinary human everyday life, conjoined 'Ain Ghazal female twins and other examples from prehistoric Eurasia may stimulate evolutionary research to prove the conjoined twins are part of human evolution probably from the beginning of the human history.

For now at least in art, Abby and Brittany Hensen have certain cultural-biological ancestry which goes at least 9 millennia years back.