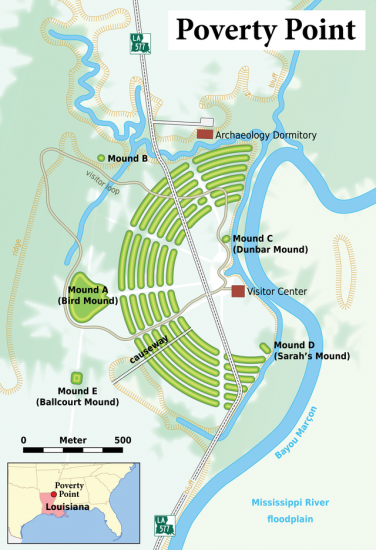 Map – Overview of the archaeological site

During survey work in 2011, Poverty Point archaeologist Diana Greenlee happened upon what she thought was an undiscovered mound created by the prehistoric Poverty Point inhabitants. 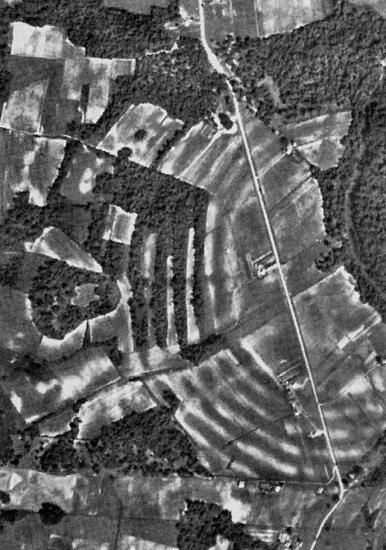 Additional research, including sediment tests, proved her initial assumption true. Poverty Point has another mound. It was discovered in a remote wooded area of the site and designated now as Mound F.

“I wasn’t sure it was a mound because archaeologists have been working here for a hundred years, so what were the chances there was really a mound they haven’t found? I thought it looked like a mound but believed it also could have been some erosional feature. Even though I found it in 2011 I did not have the opportunity to confirm it was a mound until August,” Greenlee said.

It escaped discovery because of its small size — approximately 5 feet high — and its location in a less traveled, heavily wooded area.

“I’m pretty excited. It’s always fun when you learn about something that nobody else knows about,” Greenlee said.

Preliminary investigation suggests the mount was built after 1280 B.C.

“It was probably one of the last earthwork projects here at the site by the Poverty Point people,” Greenlee said.

Poverty Point Park Ranger David Griffing said while amazing discoveries happen often at the historic site, the unearthing of a mound that’s eluded archaeologists all this time is a fantastic find.

“We are always discovering something. About seven years ago, using the magnetic gradiometer on the site we discovered circles out in the plaza area which looked like some kind of structure. We still have research to do on it to find out what that’s all about,” Griffing said. “There are a lot of discoveries going on. The more work we do at the site the more discoveries we have.”

He said only 1 percent of Poverty Point has been excavated, so the location has many more undiscovered mysteries that archaeologists will uncover for generations. The site consists of more than 400 acres and is considered of one of the most important archaeological sites on the continent because of the prehistoric earthwork dating between 1700 and 1100 B.C.

“There will always be discoveries for decades to come. We think it is great we have this site where we are continually having new discoveries,” Griffing said.

He said additional archaeological research and investigation will be done on Mound F, including more soil tests and limited excavations to determine the purpose of the mound.