People living in Roman Britain had healthier gums than their modern-day descendants, a feat of archaeological dentistry shows.

A team at King's College London and the Natural History Museum found only 5% of adults had gum disease in the Roman, and certainly pre-toothbrush, era.

Modern day smoking and type 2 diabetes are blamed for a figure of nearly one in three today.

But ancient Britain was certainly not a golden age of gleaming gnashers.

The smiles of our ancestors were littered with infections, abscesses and tooth decay, the study showed.

The research group analysed 303 skulls from a burial ground in Poundbury, in Dorset. The skeletons, mostly of people who died in their 40s, dated from between AD 200 and AD 400.

Gum disease starts with inflammation and a bit of bleeding. But it can become more severe and damage the bone and supporting tissue deep inside the gum.

It means there is a trace of severe gum disease left in the skeletal teeth and jaws, long after the fleshy gums have rotted away. 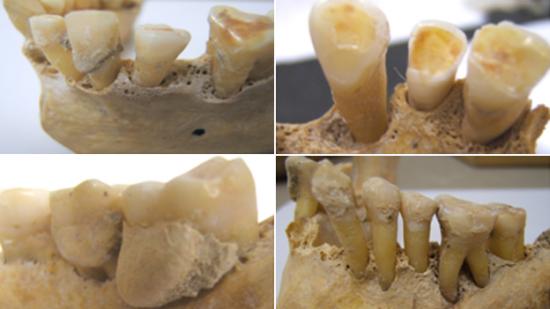 A collection of teeth analysed by the research group

Prof Francis Hughes, from the dental institute at King's College London, told the BBC: "The amount of severe gum disease around today is around one third of the population.

He said the findings, published in the British Dental Journal, were evidence that gum disease was about far more than just brushing twice a day.

Theya Molleson, from the Natural History Museum said: "This study shows a major deterioration in oral health between Roman times and modern England.

"By underlining the probable role of smoking, especially in determining the susceptibility to progressive periodontitis in modern populations, there is a real sign that the disease can be avoided."

The skulls of children showed extensive signs of wear and tear due to a diet of abrasive grains and cereals.

Prof Hughes said: "We are in a better state overall now because what was clear from the skulls is they had longstanding infections which must have been a source of chronic pain over many years."

And half of people had tooth decay, but "having said that, a lot of people were surprisingly dentally healthy".

Commenting on the results, Prof Ian Needleman, the director of the International Centre for Evidence-Based Oral Health at University College London, told the BBC: "I liked the study a lot.

"I was initially surprised, we all tend to expect a lot of dental disease in the pre-toothbrush age and that is clearly not the case.

"People should keep brushing their teeth, but the study shows oral health is more complex and smoking, diabetes and possibly diet make a major contribution."