Did the Tamil-Brahmi script originate in the post-Asokan period, that is, after the 3rd century BCE, or is it pre-Asokan? A cist-burial excavated in 2009 at Porunthal village, on the foothills of the Western Ghats, 12 km from Palani in Tamil Nadu, has reignited this debate because of the spectacular variety of grave goods it contained.

One of the two underground chambers of the grave was remarkable for the richness of its goods: a skull and skeletal bones, a four-legged jar with two kg of paddy inside, two ring-stands inscribed with the same Tamil-Brahmi script reading “va-y-ra” (meaning diamond) and a symbol of a gem with a thread passing through it, 7,500 beads made of carnelian, steatite, quartz and agate, three pairs of iron stirrups, iron swords, knives, four-legged jars of heights ranging from few centimetres to one metre, urns, vases, plates and bowls. It was obviously a grave that belonged to a chieftain ( The Hindu , June 28, 2009 and Frontline , October 8, 2010). 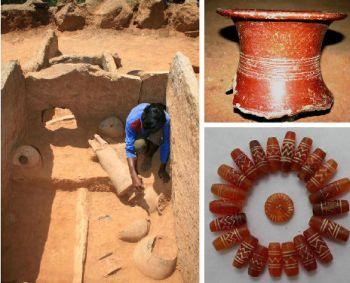 The cist-burial with two chambers, port-hole, ring-stand, a four-legged jar and pots at Porunthal; the ring-stand with Tamil-Brahmi inscription; decorated carnelian beads [Credit: The Hindu]

When K. Rajan, Professor, Department of History, Pondicherry University, excavated this megalithic grave, little did he realise that the paddy found in the four-legged jar would be instrumental in reviving the debate on the origin of the Tamil-Brahmi script. Accelerator mass spectrometry (AMS) dating of the paddy done by Beta Analysis Inc., Miami, U.S.A, assigned the paddy to 490 BCE. “Since all the goods kept in the grave including the paddy and the ring-stands with the Tamil-Brahmi script are single-time deposits, the date given to the paddy is applicable to the Tamil-Brahmi script also,” said Dr. Rajan. So the date of evolution of Tamil-Brahmi could be pushed 200 years before Asoka, he argued.

This dating, done on the Porunthal paddy sent to the U.S. laboratory by Dr. Rajan, took the antiquity of the grave belonging to the early historic age to 490 BCE, he said. It held great significance for Tamil Nadu's history, he added. This was the first time an AMS dating was done for a grave in Tamil Nadu.

There are two major divergent views on the date of Tamil-Brahmi.

While scholars such as Iravatham Mahadevan and Y. Subbarayalu hold the view that Tamil-Brahmi was introduced in Tamil Nadu after 3rd century BCE and it is, therefore, post-Asokan, some others including K.V. Ramesh, retired Director of Epigraphy, Archaeological Survey of India (ASI), consider it pre-Asokan.

According to Dr. Rajan, the AMS dating of the Porunthal paddy grains has the following implications: the context of the Tamil-Brahmi goes back to 490 BCE and it is, therefore, pre-Asokan; Tamil Nadu's ancient history can be pushed back to 5th century BCE and it was contemporary to mahajanapadas (kingdoms) such as Avanti, Kosala, Magadha and so on; paddy cultivation goes back to 5th century BCE; and it establishes that the megalithic graves introduced in the Iron Age continued into the early historic times.

When contacted, Mr. Mahadevan, a leading authority on the Tamil-Brahmi and Indus scripts, and Dr. Subbarayalu, Head, Department of Indology, French Institute of Pondicherry, said it was difficult to reach a conclusion on the basis of one single scientific dating.

Mr. Mahadevan described the dating as “interesting” but said “multiple carbon-dates are needed” for confirmation. “If there are several such cases, history has to be re-written because up to now, the scientifically proved earliest date is from Tissamaharama in southern Sri Lanka, where a Tamil-Brahmi script is dated to 200 BCE.” If there is scientific evidence that the paddy is dated to 490 BCE, “we have to sit up and take notice, and wait for confirmation,” Mr. Mahadevan said.

The Asokan-Brahmi is dated to 250 BCE. Megasthenes, the Greek Ambassador to the court of Chandragupta Maurya, Emperor Asoka's grandfather, had stated that the people of Chandragupta Maurya's kingdom did not know how to write and that they depended on memory. Besides, there is no inscription of the pre-Asoka period available. Mr. Mahadevan said: “Supposing a large number of carbon-datings are available from various sites, which will take us to the period of the Mauryas and even the Nandas, we can consider. But to push [the date of the origin of the Tamil-Brahmi script] a couple of centuries earlier with a single carbon-dating is not acceptable because chances of contamination and error are there.”

Dr. Subbarayalu also argued that on the basis of one single scientific dating, it was difficult to reach the conclusion that Tamil-Brahmi was pre-Asokan. There should be more evidence to prove that Tamil-Brahmi was earlier to the time of Asoka, in whose time was available the earliest Brahmi script in north India.

Mr. Mahadevan's conclusion that Tamil-Brahmi is post-Asokan and it had its advent from about the middle of the third century BCE is based on “concrete archaeological as well as palaeographical grounds” and this date is as yet the most reasonable one, in spite of minor points of difference on his dating of individual inscriptions, said Dr. Subbarayalu.

The date of the Tamil-Brahmi script found at Porunthal, on palaeographic basis, could be put only in the first century BCE/CE and “cannot be pushed back to such an early date [490 BCE].” The three letters “va-y-ra” found on the ring-stands were developed and belonged to the second stage of Mr. Mahadevan's dating of Tamil-Brahmi. “It is premature to revise the Tamil-Brahmi dating on the basis of a single carbon date, which is governed by complicated statistical probabilities,” Dr. Subbarayalu said. The word “vayra” is an adapted name from the Prakrit or Sanskrit “vajra” and it is difficult to explain convincingly the generally dominant Prakrit element in Tamil-Brahmi inscriptions found on rock and pot-sherds if Tamil-Brahmi is indigenous and pre-Asokan and transported from south India to north India, he says.

On the other hand, Dilip K. Chakrabarti, Emeritus Professor, Department of Archaeology, University of Cambridge, called the Porunthal Tamil-Brahmi script “an epoch-making discovery in the archaeology of Tamil Nadu” and said there “is no doubt” that Tamil-Brahmi belonged to the pre-Asokan period. In two of his books — “An Oxford Companion to Indian Archaeology” and “India, an Archaeological History” — he had written that the evolution of Tamil-Brahmi should go back to circa 500 BCE.

The date given by the American laboratory was “a wonderful result,” said M.R. Raghava Varier, former Professor, Department of History, Calicut University, “because the earliest date given so far to a south Indian site was 300 BCE.” The archaeological sites of Uraiyur in Tamil Nadu and Arikkamedu in Puducherry fell within the time-limit of 300 BCE and Arikkamedu belonged to a later period than Uraiyur. While the [pre-Asokan] date given to a Tamil-Brahmi inscription found at Anuradhapura in Sri Lanka “has not been proved convincingly,” there was “a convincing date” at Porunthal and it was based on a scientific dating system, said Professor Varier, who was the honorary Editor of Kerala Archaeological Series. Its importance lay in the fact that while the Asokan-Brahmi began in the 3rd century BCE, the Porunthal script could be dated to 5th century BCE, he says. “But we cannot argue that Brahmi was invented by the southern people. That is a different issue.”