Portway (G-B): Skeleton of high-status girl was one of dozens of burials at Saxon cemetery 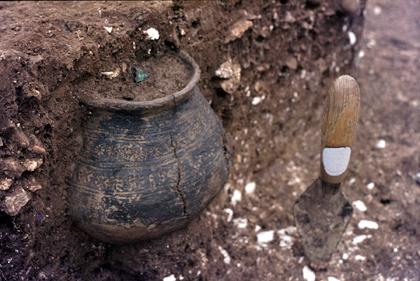 Cremation 58 from a cemetery discovered at Portway © Hampshire Cultural Trust

A pubescent Saxon girl buried with a fine necklace made of amber beads and coloured glass was one of 69 inhumation burials found in Hampshire more than 40 years ago, according to archaeologists revisiting a 6th century Saxon cemetery close to Bronze Age burial mounds in Hampshire.

Most of the inhumations at Portway East, to the west of Andover, were found laid on their backs with their legs extended when the local archaeological society began excavations at the industrial estate in 1973. Plough damage had left many of the skeletons in a poor condition, with 57 deposits of cremated bone recovered.

The teeth of the juvenile, whose grave goods identified her as female, aged her to between 12 and 14 years old

“The grave was rectangular with well-cut sides and the plan produced by the archaeologists gives a clear indication of the interior layout,” says Dave Allen, the Keeper of Archaeology at Hampshire County Council. 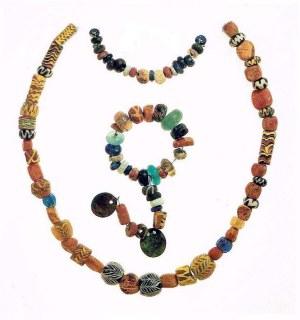 The necklace from Grave 44. The bracelet is from Grave 50© Hampshire Cultural Trust

“The necklace stretched from either side of the neck across the chest, with amber and glass beads generally alternating.

“The distinctive decorations on the glass beads indicate a date sometime after AD 550. In the absence of 7th century objects from the site, a date in the second half of the 6th century seems appropriate.

“The grave was one of a pair and the other contained the relatively well-preserved skeleton of a female of 25 to 35 years of age.

“The quality of the necklace suggests that the young girl would have been of high social status.”
A set of bronze toilet items, including an ear scoop, were held on a bronze ring, as well as a “girdle group” – an elaborate set of items with uncertain functions.

“A strand of thread - possibly flax - wound around the ring,” says Allen. “This may have served to suspend the implements from her neck.

“The girdle group was found at waist level and included a rectangular iron loop, probably used to suspend the items.” 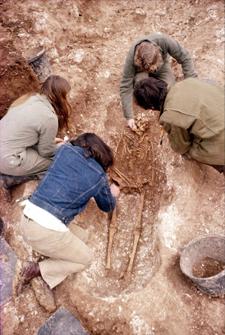 One of the skeletons as it was revealed© Hampshire Cultural Trust

Infections in the bodies found at the site, overlooking the River Anton’s valley and two prehistoric routes, were found to be less common than in other early Saxon cemeteries.

“There was an absence of conditions such as malignant tumours, common in many early populations,” adds Allen.

“None of the bones had been gnawed by predators, so the corpses were probably deeply buried originally and the graves looked after.

“Of the individual burials identifiable by sex, females outnumbered males. And 20 out of the 32 recognisable female burials contained grave goods in the form of a necklace or bracelet.”

An early stage in the excavations© Hampshire Cultural Trust