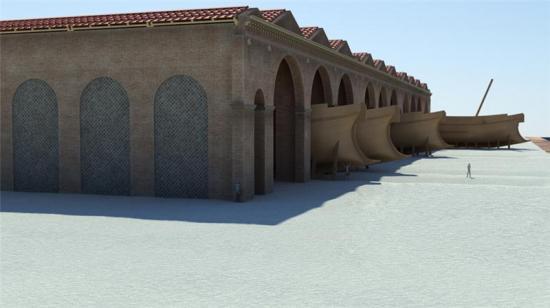 University of Southampton and British School at Rome (BSR) archaeologists, leading an international excavation of Portus – the ancient port of Rome, believe they have discovered a large Roman shipyard.

The team, working with the Italian Archaeological Superintendancy of Rome, has uncovered the remains of a massive building close to the distinctive hexagonal basin or ‘harbour’, at the centre of the port complex.

University of Southampton Professor and Portus Project Director, Simon Keay comments, “At first we thought this large rectangular building was used as a warehouse, but our latest excavation has uncovered evidence that there may have been another, earlier use, connected to the building and maintenance of ships.

“Few Roman Imperial shipyards have been discovered and, if our identification is correct, this would be the largest of its kind in Italy or the Mediterranean.”

It has long been known that Portus was a crucial trade gateway linking Rome to the Mediterranean throughout the Imperial period and the Portus Project1 team has been investigating the port’s significance over a number of years. Until now, no major shipyard building for Rome has been identified, apart from the possibility of one on the Tiber near Monte Testaccio, and a smaller one recently claimed for the neighbouring river port at Ostia.

A recent new grant of £640,000 from the Arts and Humanities Research Council (AHRC) has made this latest phase of excavation possible. These AHRC funds, together with financial support from the Archaeological Superintendancy of Rome, the University of Southampton and the British School at Rome have allowed extensive excavation to be undertaken at the site this year.

The huge building the team has discovered dates from the 2nd century AD and would have stood c. 145 metres long and 60 metres wide – an area larger than a football pitch. In places, its roof was up to 15 metres high, or more than three times the height of a double-decker bus. Large brick-faced concrete piers or pillars, some three metres wide and still visible in part, supported at least eight parallel bays with wooden roofs.

“This was a vast structure which could easily have housed wood, canvas and other supplies and certainly would have been large enough to build or shelter ships in. The scale, position and unique nature of the building lead us to believe it played a key role in shipbuilding activities,” comments Southampton’s Professor Keay, who also leads the archaeological activity of the BSR.

Investigations by his team in 2009 concentrated on the remains of an ‘Imperial palace’ and amphitheatre-shaped building, which lie adjacent to this building. He argues that together these formed a key complex where an imperial official was charged with coordinating the movement of ships and cargoes within the port. Furthermore he believes that the shipyard was an integral part of this.

Additional supporting evidence comes in the form of inscriptions discovered at Portus referring to the existence of a guild of shipbuilders or corpus fabrum navalium portensium in the port. Also, a mosaic, which is now in the Vatican Museum, but once adorned the floor of a villa on the ancient Via Labicana (a road leading south east of Rome), depicts the façade of a building similar to the one at Portus, clearly showing a ship in each bay.

“The discovery of this building has major implications for our understanding of the significance of the hexagonal basin or harbour at Portus and its role within the overall scheme of the port complex,” says Professor Keay.

He continues, “We need to stress there is no evidence yet of ramps which may have been needed to launch newly constructed ships into the waters of the hexagonal basin. These may lie beneath the early 20th century embankment, which now forms this side of the basin. Discovering these would prove our hypothesis beyond reasonable doubt, although they may no longer exist,” says Professor Keay.

Geophysicists from the Archaeological Prospection Services of Southampton and from the British School at Rome have been making geophysical surveys of the area around the building to gain additional information about its still partially buried structure. Members of Southampton’s Archaeological Computing Research Group, led by Dr Graeme Earl, have also created a computer graphic simulation, to provide both valuable visual data on its layout and construction and an impression of how it appeared and may have been used.

Professor Keay’s team is also working with Angelo Pellegrino from the Archaeological Superintendency of Rome to extend earlier excavations by the Portus Project, and the restoration of standing structures, relating to ‘the Imperial palace’, to better understand key issues about its layout and development.

The international team is planning further investigations at Portus to find out more about this fascinating, significant site, which holds an enormous amount of information about the activities and trade of Rome.

Background information about the building

The building uncovered by the team has undergone many changes since its construction in the time of the Emperor Trajan (AD 98-117). Excavation within one of the bays has revealed that its use changed over the centuries – once 90 years into its life with the construction of a series of inner partition walls, and then again in the late 5th century AD when changes were made to allow the storage of grain. In the early to mid-6th century AD, parts of the building were systematically demolished, probably as a defensive measure during wars between the Byzantines and Ostrogoths (AD 535-553). 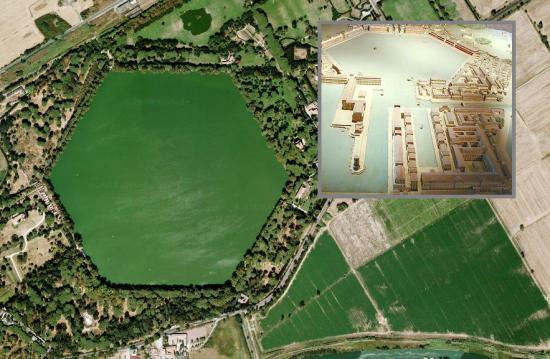