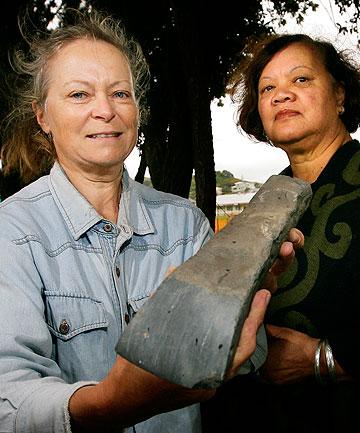 RARE FIND: Pam Chester with the adze, along with Rihia Kenny, Kaumatua of Ngati Toa.

An ancient Maori adze has been unearthed from a 15th-century settlement in Porirua, near the the spot believed to be where Kupe landed.

It was fashioned from argillite, a hard rock found in Nelson and often used to make tools, senior archaeologist Rick McGovern-Wilson said.

"You can't date the adze itself but you date the deposits where it came from. The age of the site is probably 15th century."

The adze would end up at Pataka Museum in Porirua, Dr McGovern-Wilson said.

Archaeologist Pam Chester came upon the adze and other finds while monitoring earthworks near Para-Plim Rugby Club.

It is widely believed that Kupe, the Polynesian explorer, sailed into Porirua Harbour in the 10th century and landed on the shores of Paremata.

Evidence of a pre-1500 moa-hunter settlement was discovered in the 1960s, north of the Mana Cruising Club.

Ms Chester has meticulously inspected the trenches, where drains will be laid, since digging began last month.

"It is exciting. I'm really pleased with what we've found actually," she said.

She has discovered several earth ovens with fire-cracked cooking stones, possibly prehistoric (before the written word in New Zealand), about 50cm below the manicured rugby pitch.

"At this point we don't know exactly when they date to but we've taken charcoal samples from them to be dated by radiocarbon dating," Ms Chester said.

Victoria University Maori historian Peter Adds said Porirua was "prime real estate" for early Maori, having a sheltered harbour and being close to the South Island. The site was particularly valuable because few others had been discovered.

"We're looking at a part of time when people have just become Maori. It represents an early phase of the development of Maori culture."

Metal nails were found where a European garden was mapped in 1848. Ms Chester has also found evidence of people illegally fossicking for artefacts, which can lead to prosecution.

Ngati Toa spokeswoman Jennie Smeaton said the iwi was waiting for a preliminary report on the findings, due to be published next month, before coming to conclusions.

"We know this was a pa site pre-Ngati Toa."

Tribes, including Nga Tara, Ngati Rangi and Ngati Ira, occupied the area before the Ngati Toa chief, Te Rauparaha, arrived in the 1820s.