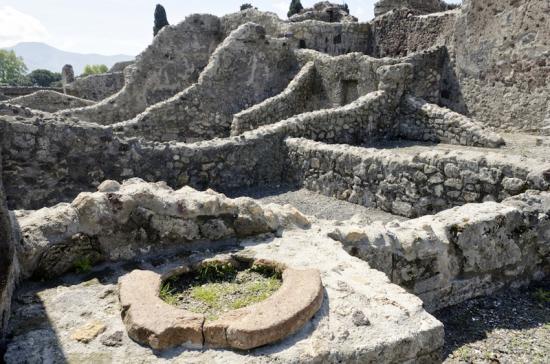 The ruins of Pompeii. In A.D. 79, a massive eruption by Mount Vesuvius buried the town in ash, freezing it in time.  CREDIT: perspectivestock / Shutterstock.com

Think of it as the earliest version of the Facebook wall post: Ancient Pompeii residents revealed their social networks through graffiti on actual walls.

Now, a new analysis of some of these scribbled messages reveals the walls of the wealthy were highly sought after, especially for political candidates hoping to drum up votes. The findings suggest that Pompeii homeowners may have had some control over who got artistic on their walls, said study researcher Eeva-Maria Viitanen, an archaeologist at the University of Helsinki.

"The current view is that any candidate could have chosen any location and have their ad painted on the wall. After looking at the contexts, this would not seem very likely," Viitanen told LiveScience. "The facades of the private houses and even the streetwalks in front of them were controlled and maintained by the owner of the house, and in that respect, the idea that the wall space could be appropriated by anyone who wanted to do it seems unlikely."

Pompeii, which was famously destroyed and frozen in time by an eruption of Mount Vesuvius in A.D. 79, was a city of "avid scribblers," Viitanen told LiveScience. People scratched messages into the city's stucco walls or wrote them in charcoal. They copied literary quotes, wrote greetings to friends and made notes of sums. 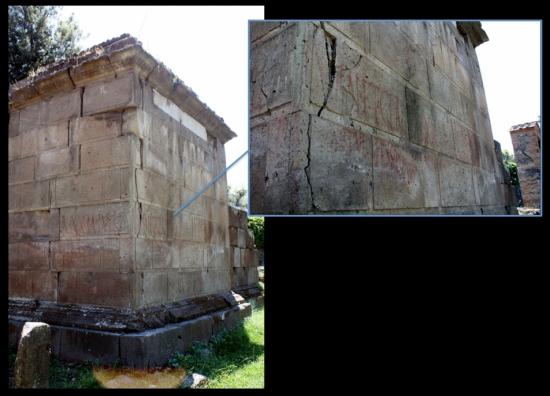 A tomb in Pompeii covered in red graffiti. Wall scribblings were common all over the city, both on public buildings and inside and outside private homes. Research presented in 2012 at the annual meeting of the Archaeological Institute of America suggests tombs were no different.
CREDIT: Allison Emmerson, University of Cincinnati

Amid all these amateur "wall posts" were political campaign ads, most of which were done by professional painters, Viitanen said. It was these posts that she and her colleagues focused on, mapping out each message and noting its context. The researchers wanted to know where candidates put their messages — near bars and other high-traffic areas, or on the walls of private houses? And where did certain candidates focus their campaigns?

To narrow down the enormous amount of graffiti, the researchers focused on three regions of the city: two residential areas on opposite sides of town and one business district. There were more than 1,000 electoral messages scrawled on the walls in these regions, most dating from the last three centuries of Pompeii's existence.

Most of the messages are simple, containing just a name and the office the person was running for, Viitanen said.

"Sometimes there are some simple attributes such as 'a good man,' 'worthy of public office,'" she said. One candidate even bragged about his bread-baking abilities on his campaign-wall post, Viitanen said.

Other ads were sponsored by groups supporting a particular candidate, including such unsavory fraternities as pickpockets, late-night drinkers and petty thieves.

"Makes you wonder whether their candidates were really worth voting for!" Viitanen said.

The first find was that politicians wanted an audience. The campaign ads were almost invariably on heavily trafficked streets, Viitanen reported Friday (Jan. 4) at the annual meeting of the Archaeological Institute of America in Seattle.

The second, more surprising, discovery, was that the most popular spots for ads were private houses rather than bars or shops that would see a lot of visitors.

"Bars were probably more populated, but could their customers read and would they vote?" Viitanen said.

Some 40 percent of the ads were on prestigious houses, she said, which is notable because there were only a third as many lavish homes as there were bars, shops and more modest residences. Clearly, candidates were vying for space on the homes of the wealthy.

That discovery makes Viitanen and her colleagues think the ads reveal early social networking. It seems likely that candidates would need permission from the homeowner to paint their ads, suggesting the graffiti is something of an endorsement.

The research is preliminary and not yet published in a peer-reviewed journal, and Viitanen said there is much more work to do to map the social networks revealed on the ancient walls.

"So far, we have barely scratched the surface on this," she said. "There are hundreds of texts and locations, and it takes a lot of time to go through them all."