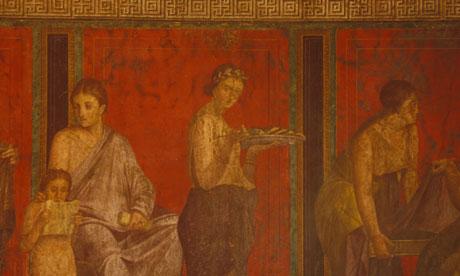 A fresco depicting the cult of Dionysus in the Villa of the Mysteries, Pompeii. Photograph: Julian Worker/Alamy

When word spread to Britain of the sensational discovery of the Roman towns of Pompeii and Herculaneum in the 18th century, "Pompeiian red" became the favoured colour for smart dining-rooms – as it remains today.

But, it seems, it may be time to get out the paint chart. According to new research presented to Sapienza University in Rome last week, large swaths of the vivid "Pompeiian red" frescoes in the town actually began life as yellow – and were turned red by the gases emitted from Vesuvius as it erupted in AD 79.

Experts have long realised that some of the characteristic vivid reds of the frescoes in Pompeii and Herculaneum were originally yellow. But a new study, conducted by Italy's National Institute of Optics, suggests the sheer extent of the colour change.

Sergio Omarini, who presented the institute's findings, said: "At the moment, there are 246 walls perceived as red, and 57 as yellow. But based on the new research, the numbers must have been, respectively, 165 and 138.

"The discovery allows us to rethink the original appearance of the city in radically different way from how we are used to – in which red, indeed 'Pompeiian red', has been prevalent."

Andrew Wallace-Hadrill, professor of classics at Cambridge University, and author of Houses and Society in Pompeii and Herculaneum, said: "One of the ironies of this is that red was constantly forged in antiquity. Red was an extremely expensive and valued colour. The proper, bright red was based on minium [red lead] imported from Armenia. What we often think of 'Pompeiian red', though, was a poor man's version, made by giving yellow walls a red wash."

The various reds of Pompeii – the true, expensive red; the cheap version; and that caused by the gas emissions – can be hard even for experts to tell apart, he said. Sometimes, though, the latter can be identified by "tide marks": "you can see a swath of red on a wall that gradually smudges into yellow".

Perhaps the most famous set of red frescoes from Pompeii are those in the so-called "Villa of the Mysteries", in which an enigmatic set of figures perform arcane rituals on a scarlet background.

According to Wallace-Hadrill, these walls almost certainly started out red – although their brightness and sheen are down to aggressive restoration in the early 20th century. "That red is probably an expensive, real red," he said. "It's certainly too soon to throw out the idea of Pompeiian red as a fabulous colour."

Mary Beard, professor of classics at Cambridge University and author of Pompeii, said: "I am always a bit suspicious of these claims. We know that some of the red was once yellow, but I'm not sure that we can be certain about the proportions. What is certainly true, though, is that the heat had some effect on the colours; it's another case in which we can see that Pompeii was not the time capsule we sometimes imagine it to be."

The discovery of apparently pristine houses in Pompeii, Herculaneum and elsewhere had an enormous effect on the history of taste in Britain. Generations of gentlemen were influenced by visiting Italy on the Grand Tour, not least the architect Sir John Soane, who saw the excavations in 1780. Judging by his frequent use of the colour in decorative schemes, "Pompeiian red was his favourite colour", according to Tim Knox, director of Sir John Soane's Museum.

Amanda Vickery, professor of history at Queen Mary, University of London, and author of Behind Closed Doors: At Home in Georgian England, said: "The Grand Tour shaped the cultural parameters of the ruling elite for 150 years. It was like a gap year, and it stamped on these men what good taste was."