Pompéi (Italie): Diets of the Middle and Lower Class

No Scrounging for Scraps: UC Research Uncovers the Diets of the Middle and Lower Class in Pompeii

No fries, but how about a side of giraffe leg? Surprising discoveries result from an excavation site in the buried city of Pompeii.

University of Cincinnati archaeologists are turning up discoveries in the famed Roman city of Pompeii that are wiping out the historic perceptions of how the Romans dined, with the rich enjoying delicacies such as flamingos and the poor scrounging for soup or gruel.

Steven Ellis, a University of Cincinnati associate professor of classics, will present these discoveries on Jan. 4, at the joint annual meeting of the Archaeological Institute of America (AIA) and American Philological Association (APA) in Chicago.

UC teams of archaeologists have spent more than a decade at two city blocks within a non-elite district in the Roman city of Pompeii, which was buried under a volcano in 79 AD. The excavations are uncovering the earlier use of buildings that would have dated back to the 6th century.

Ellis says the excavation is producing a complete archaeological analysis of homes, shops and businesses at a forgotten area inside one of the busiest gates of Pompeii, the Porta Stabia.

The area covers 10 separate building plots and a total of 20 shop fronts, most of which served food and drink. The waste that was examined included collections from drains as well as 10 latrines and cesspits, which yielded mineralized and charred food waste coming from kitchens and excrement. Ellis says among the discoveries in the drains was an abundance of the remains of fully-processed foods, especially grains. 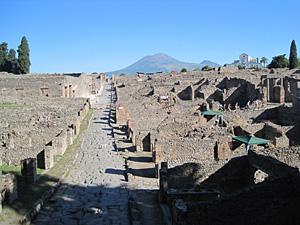 The neighborhood of Pompeii under excavation by the University of Cincinnati.

“The material from the drains revealed a range and quantity of materials to suggest a rather clear socio-economic distinction between the activities and consumption habits of each property, which were otherwise indistinguishable hospitality businesses,” says Ellis. Findings revealed foods that would have been inexpensive and widely available, such as grains, fruits, nuts, olives, lentils, local fish and chicken eggs, as well as minimal cuts of more expensive meat and salted fish from Spain. Waste from neighboring drains would also turn up less of a variety of foods, revealing a socioeconomic distinction between neighbors.

A drain from a central property revealed a richer variety of foods as well as imports from outside Italy, such as shellfish, sea urchin and even delicacies including the butchered leg joint of a giraffe.

“That the bone represents the height of exotic food is underscored by the fact that this is thought to be the only giraffe bone ever recorded from an archaeological excavation in Roman Italy,” says Ellis. “How part of the animal, butchered, came to be a kitchen scrap in a seemingly standard Pompeian restaurant not only speaks to long-distance trade in exotic and wild animals, but also something of the richness, variety and range of a non-elite diet.”

Deposits also included exotic and imported spices, some from as far away as Indonesia.

Ellis adds that one of the deposits dates as far back as the 4th century, which he says is a particularly valuable discovery, since few other ritual deposits survived from that early stage in the development of Pompeii.

“The ultimate aim of our research is to reveal the structural and social relationships over time between working-class Pompeian households, as well as to determine the role that sub-elites played in the shaping of the city, and to register their response to city-and Mediterranean-wide historical, political and economic developments. However, one of the larger datasets and themes of our research has been diet and the infrastructure of food consumption and food ways,” says Ellis.

He adds that as a result of the discoveries, “The traditional vision of some mass of hapless lemmings – scrounging for whatever they can pinch from the side of a street, or huddled around a bowl of gruel – needs to be replaced by a higher fare and standard of living, at least for the urbanites in Pompeii.”

Funding for the research was supported by the UC Department of Classics Louise Taft Semple Fund, with generous additional support from the National Endowment for the Humanities, the National Geographic Society, the Loeb Classical Library Foundation and several private benefactors.