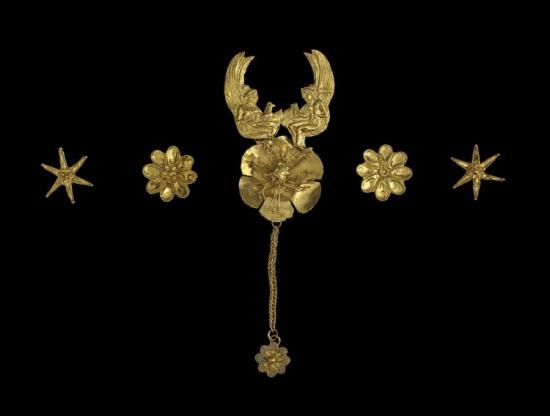 Crossroads of the Mediterranean, crossroads of ancient civilizations, crossroads of many cultures from Greece to Turkey and from Israel to Egypt, Cyprus has been long renowned for its gracious beauty, which transcends epochs and nationalities. This remarkable land enters the realm of mythology as the birthplace of Aphrodite and location where Helen, accompanied by Menelaus, tarried upon returning from the Trojan Wars. Yet, reality equally intrigues: Cyprus is the chosen birthplace of Caesarion, Cleopatra’s son with Julius Caesar.

The Republic of Cyprus embarked upon a number of festive events to celebrate its assuming the presidency of the European Union. Among these, President and Mrs. Christofias hosted a concert at Lincoln Center; Ambassador Emiliou spoke to members of the Foreign Press Association; and Consul General Sophianou lectured at the European Union Studies Center at The Graduate Center of City University of New York. Further, four extraordinary exhibitions have been mounted in Belgium, France, Cyprus, and now the United States. The City of Gold: Tomb and Temple in Ancient Cyprus is fittingly held at the Princeton University Art Museum. Over half the objects on display have been unearthed by the Princeton University Archaeological Expedition to Polis Chrysochous, Cyprus, directed by Professor Emeritus William A.P. Childs from 1983 to 2007.

The installation traces the history of this fascinating site from its prehistoric origins to its artistic pinnacle—a glorious city once named Marion in the eighth century, when it was founded.;It was subsequently called Arsinoe after the wife of Pharaoh Ptolemy II Philadelphos during Ptolemaic and Roman times and is known in the modern era as Polis Chrysochous or City flowing with Gold. There is no clear reason for Chrysochous’s name. Scholars propose that it may refer to someone’s name, to the fertile soil, to the area studded with copper mines, to Marion’s large number of goldsmiths, to the numerous golden tomb gifts found. Yet, other towns with more gold offerings and a similar terrain do not have the word “gold” appear as part of their name.

Spanning varying periods, the exhibition includes over 100 artifacts of painted frescoes, pottery, gold jewelry, seals, coins, as well as sculptures of marble, bronze, terracotta, and limestone. Archaeology often involves uncovering layers of earth to reach the earliest strata, sometimes destroying evidence of splendid marvels beneath. With the excavation context unknown, it may become difficult to determine an object’s origin and period of production, which is wonderfully not the case here. Fortuitously, teams from Germany, England, Cyprus, Sweden, and the United States documented much of what they dug up while preserving vaunted treasures. Due to its abundant copper and strategic position on the northwestern coast, Marion became the seat of one of the most important Cypriot kingdoms. Because of its special commercial relationship with Athens, the city received in time many cultural benefits.

Pliny the Elder (the Roman author who described the destruction of Pompeii) wrote about a bronze caster from Cyprus called Styppax. This artist worked in Athens under Pheidias, who was in charge of the Parthenon’s construction, and created a statue for the great statesman Pericles. This fact is proof that artists from Cyprus labored in Athens and could transmit knowledge of the Greek classical style to their island home.

The objects from the Marion period are the high points of this show. They call attention to themselves by their exciting beauty and may blend artistic traditions.

An Attic drinking cup called a “kylix” is proudly signed “HERMAIOSEPOIESEN.” It was discovered buried along with another piece that is by the same craftsman and depicts the god Dionysius. 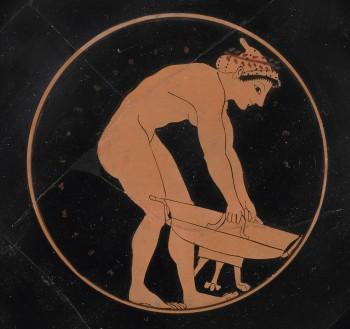 The inside of the vessel is decorated with an animated image of a nude woman lifting a bronze basin for washing the feet. Rendered with an elegant contour line in the red figure style so that the actual red colored clay surface appears, the lively composition and revealing drawing made such ceramics desirable to own and were exported widely.

In 632 B.C., a Greek trading colony was established in Naucritis along the Nile, resulting in Egyptian motifs appearing in statuary, as seen in a fragmented colossal head of a male (the reconstructed size is about 3 yards).

When intact, this statue with its stiff akimbo stance with one foot forward would have exhibited two elements found in royal sculpture. These are the beard of justification—meaning that one has been just and will be granted eternal life—and clenched fists in which Pharaoh held symbols of his power. The artist of this piece also incorporated elements such as the Greek Archaic smile associated with standing male youths termed “kouroi.”

Other selected artifacts like this statuette betray Greek prototypes as deeply felt sources. 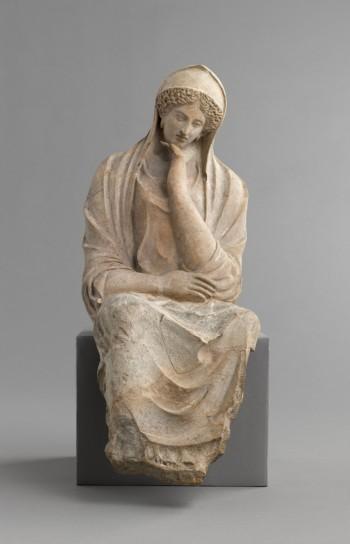 Originally vividly painted, this woman, expressive of sorrow and grief, appears similar to those with classical restraint visualized throughout the Parthenon. As terracotta is clay and breaks easily even when small in size and has many stress points where the body undulates in and out, to master the needed technique to create such a work of art is very difficult. To avoid this problem, artisans generally relied upon terracotta as a model for bronze casting rather than as the final version. But painted clay better approximates the reality of living flesh and facial features than bronze casting does, and some master artists preferred it. Monumental painted pieces in the round probably necessitated training and apprenticeship, informing us about the educational standards achieved in Marion. A high level of society, in turn, necessitates a stable economy with a moneyed class to patronize artists.

According to legend, Aphrodite is born in the waters off nearby Paphos, a coastal city in the southwest of Cyprus. Themes connected with Homer’s Lady of Kypros, another word for Cyprus, become appropriate for local artisans. During the Hellenistic period, the goddess of love and beauty along with Eros became a popular subject for sculpture, vase decoration, and jewelry. A tomb find, the pendant of Erotes from a necklace, gives evidence of the exquisite, intricate craftsmanship for which these artisans were renowned. Utilizing granulation, enamel, repousseé, metal die, as well as soldering, they created impressive funerary treasuries. The compelling richness of the Hellenic tradition with its sensitive depictions contributes to humankind’s understanding of our shared destiny. Antiquities such as those discussed serve as a testament to the importance of preserving humanity’s cultural heritages—inspiring creativity from all peoples.

The City of Gold: Tomb and Temple in Ancient Cyprus exhibition is running at the Princeton University Art Museum through Jan. 20.