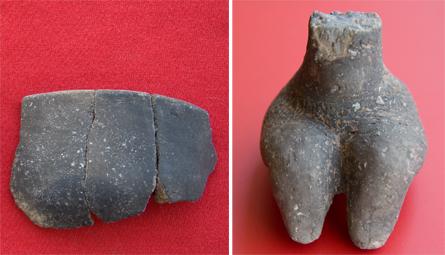 ANCIENT AGGIES -  Discoveries at two prehistoric farming villages in southern Croatia, including ceramic bowls and a partial female statuette, shown above, reflect a sophisticated culture of plant cultivation and animal herding much like that still practiced in the region today.A. Moore

Croatia does not have a reputation as a hotbed of ancient agriculture. But new excavations, described January 7 in San Antonio at the annual meeting of the Archaeological Institute of America, unveil a Mediterranean Sea–hugging strip of southern Croatia as a hub for early farmers who spread their sedentary lifestyle from the Middle East into Europe.

Moore codirects an international research team, with archaeologist Marko Mendušic of Croatia’s Ministry of Culture in Šibenik, that has uncovered evidence of intensive farming at Pokrovnik and Danilo Bitinj, two Neolithic settlements in Dalmatia. Plant cultivation and animal raising started almost 8,000 years ago at Pokrovnik and lasted for close to a millennium, according to radiocarbon dating of charred seeds and bones from a series of occupation layers. Comparable practices at Danilo Bitinj lasted from about 7,300 to 6,800 years ago.

Other evidence supports a fast spread of sophisticated farming methods from the Middle East into Europe (SN: 2/5/05, p. 88), remarks Harvard University archaeologist Ofer Bar-Yosef. Farming villages in western Greece date to about 9,000 years ago, he notes. Middle Eastern farmers exploited a wide array of domesticated plants and animals by 10,500 years ago, setting the stage for a westward migration, Bar-Yosef says.

Other researchers began excavating Pokrovnik and Danilo Bitinj more than 40 years ago. Only Moore and his colleagues dug deep enough to uncover signs of intensive farming.

Their discoveries support the idea that agricultural newcomers to southern Europe built villages without encountering local nomadic groups, Moore asserts. Earlier excavations at Neolithic sites in Germany and France raise the possibility that hunter-gatherers clashed with incoming villagers in northern Europe, he notes.

Animal bones found at the two villages indicate that residents primarily herded sheep and goats, along with some cattle and a small number of pigs.

Diverse food sources provided a hedge against regional fluctuations in rainfall and growing seasons, according to Moore. “This is an astonishing demonstration of agricultural continuity from the Neolithic to present times,” he says.

Aside from farming, Neolithic villagers in Dalmatia were “oriented toward the sea, and enjoyed extensive long-distance contacts,” Moore adds. Chemical analyses of obsidian chunks found at Pokrovnik and Danilo Bitinj, directed by archaeologist Robert Tykot of the University of South Florida in Tampa, trace most of them to Lipari, an island off Sicily’s north coast.

Shapes and styles of pottery from the ancient Dalmatian villages changed dramatically several times during the Neolithic. Moore’s team can’t explain why these shifts occurred while the farming economy remained the same.

Other than three children found in separate graves, the researchers have unearthed no human skeletons at Pokrovnik and Danilo Bitinj.