More than 100 skeletons, along with personal possessions, have been uncovered at the site in Pocklington, east Yorkshire 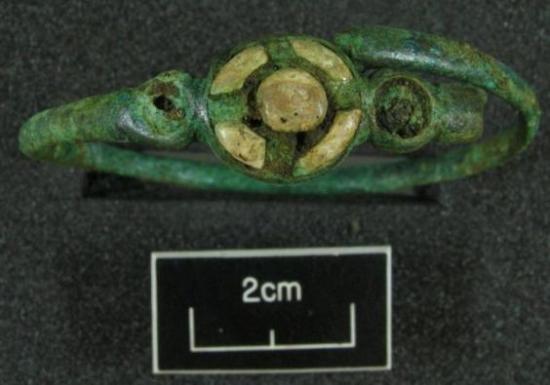 Almost 2,000 years after being buried, the remarkably well-preserved remains of 150 skeletons and their personal possessions have been discovered in a small market town at the foot of the Yorkshire Wolds.

The remains of the burial ground that contained skeletons of people from the middle-iron age Arras culture in Pocklington, east Yorkshire is being hailed as one of the largest and most significant iron age findings of recent times.

Some of the 75 square barrows – burial chambers – contained personal possessions such as jewellery and weapons. Archaeologists have also discovered a skeleton with a shield.

It is believed the site dates to the iron age, which in Britain lasted from 800BC until the time of the Roman conquest, which started in AD43.

The site of the dig. Photograph: MAP Archeology

The discovery was made by a property developer who had excavated the site on Burnby Lane to begin work on building new homes. But the work was halted and archaeologists were called in after the housebuilder revealed the “rare” and “internationally important” settlement.

Archaeologists described the find as a “hugely important” and “fascinating” discovery that would reveal information about Britain’s hidden history.

“We are hoping that these findings shed light on the ritual of iron age burial – and, as we can assume from the shield and sword burials, these were significant members of society, so our understanding of culture and key figures of the time could be really enhanced,” said the site director, Paula Ware.

The unearthing of the burial ground will now lead to the largest study undertaken of the iron age population in the last 35 years.

“It will take several years to complete this work but an assessment report will be produced within six months of completion on the site, which will reveal further details,” said Peter Morris from property developers David Wilson Homes.

The study will focus on whether the population is indigenous or migrants from the continent. Archaeologists also hope to reveal how those buried at the site died, what stresses the body had been placed in during their life span, and whether or not they are related in anyway, as well as potential DNA analysis.

In January this year, 3,000 years after being destroyed by fire, the remains of two bronze age houses and their contents were discovered at a quarry site in Peterborough.

The artefacts include a collection of everyday domestic objects unprecedented from any site in Britain, including jewellery, spears, daggers, giant food storage jars and delicate drinking cups, glass beads, textiles and a copper spindle with thread still wound around it.

The remains of the large wooden houses, built on stilts in a waterlogged fenland site beside the ancient course of the river Nene, were the best preserved bronze age dwellings ever found in Britain.

The most poignant object, suggesting that the last meal in the house was abandoned as the owners fled, was a cooking pot containing a wooden spoon and the remains of food calcified from the heat of the fire.

Work being undertaken at the burial site of a high-ranking warrior. Photograph: MAP/PA

MAP Archaeological Practice staff member Sophie Coy holds a bronze brooch with a coral enamel, which was found at the site Anna Gowthorpe/PA