As of October 1, 2015, the archaeologists and restorers have dismantled about 30% of the upper layerof the mosaics at the Great Basilica in Bulgaria’s Plovdiv, reports local news site Plovdiv24.

This is the upper layer of the mosaics in the southern nave of the temple. The removed mosaics have been taken to a storage place for conservation and restoration, and when that is done, they will be brought back to the restored temple.

They are now working on dismantling the upper mosaic layer in the central nave of Plovdiv’s Great Basilica which they hope to achieve before the upcoming winter.

The mosaics in the central nave of the Early Christian temple feature at first images of concentric circles but then these are supplanted by very rich depictions of unique species of birds, including birds in cages.

In addition to the previously unseen mosaics, another discovery of the restorers is a masonry wallshowing the starting point of the naos of the basilica as well as a foundation stone indicating the end point of the building.

Thus, the Plovdiv archaeologists have been able to estimate more precisely the dimensions of theGreat Basilica. It had an area of over 1,200 square meters, which more than 1 decare (0.25 acres). 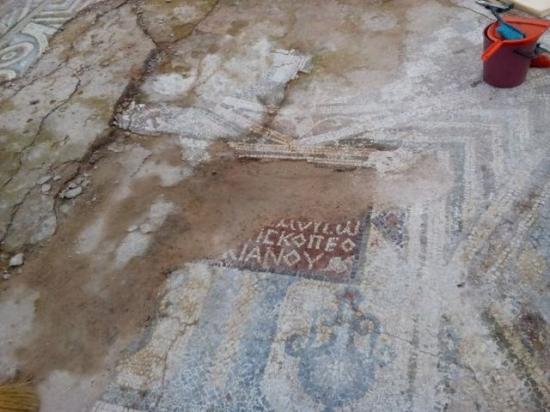 Last but not least, the team of Elena Kisyakova has found an inscription in Greek. Only about 30% of it has been preserved but it is still enough to provide some important information.

For example, the archaeologists have read the word “bishop” as well as a verb meaning “to make mosaics”.

Once it is deciphered, the newly found inscription might help date the construction of the Great Basilica in Plovdiv more precisely but for the time being it confirms the hypothesis that the temple was indeed a bishop’s basilica. 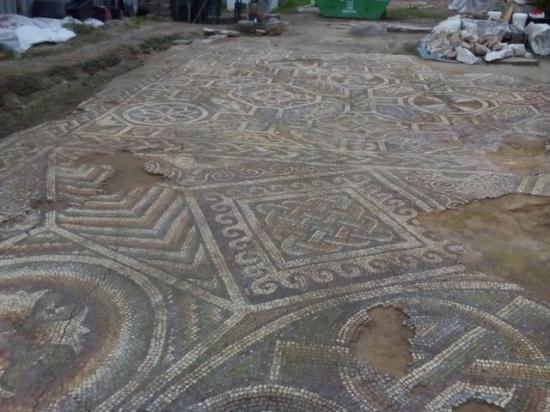 The Early Byzantine Great Basilica in Bulgaria’s Plovdiv was discovered in the 1980s but its ruins andunique floor mosaics have been re-buried with soil and sand as a means of preserving them in anticipation of the resolution of legal disputes over the property, and the securing of sufficientfunding for the further excavation and conservation of the site.

The lower layer of the mosaics is covered with several centimeters of mortar leading thearchaeologists to assume that at some point in the life of the Great Basilica in Plovdiv, which was one of the largest public buildings in Southeast Europe in the Late Antiquity, it was decided to cover its initial mosaic floor with mortar in order to create new mosaics which feature primarily depictions of birds.

Lead archaeologist Elena Kisyakova, who first found the Early Christian church in 1982, has made it clear that the project focuses on the restoration, conservation, and exhibition of the Great Basilica and its mosaics, and only partial excavations will be done on an “as needed” basis.

The total of 2000 square meters of Early Christian floor mosaics at the basilica, which was built at the beginning of the 5th century AD, will be restored and exhibited in situ, and ready to welcome visitors by the summer of 2017.