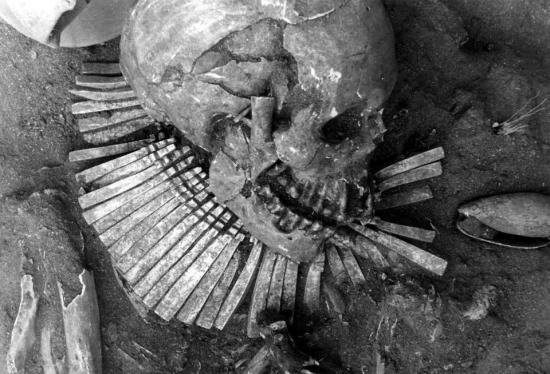 Just outside of Panama City, a precolumbian cemetery excavated in the 1950s was originally interpreted as containing extensive evidence of suicide, sacrifice, and mutilated bodies. A new analysis by archaeologists who specialize in human remains, however, questions the presence of anything irregular about the burials.

The archaeological site of Playa Venado (also called Venado Beach) was identified in 1948 when the U.S. Navy began digging in the target practice area of now-decommissioned Fort Kobbe, adjacent to Howard Air Force Base in the Panama Canal Zone. Because of its location, the site was quickly ransacked for antiquities belonging to the long-lived prehistoric Coclé culture that included fine goldwork, carved bone and ivory, semi-precious gemstone jewelry, and intricately decorated pottery.

In 1951, archaeologist Samuel Lothrop of Harvard University's Peabody Museum directed an excavation at Playa Venado and recovered 202 skeletons and grave artifacts. An additional 167 skeletons were later unearthed by avocational archaeologists. Lothrop published his thoughts on the cemetery, which dates to 550-850 AD, in a 1954 American Antiquity article he titled "Suicide, sacrifice, and mutilations in burials at Venado Beach, Panama." Unfortunately, in this time period, bioarchaeology was not yet an established discipline and Lothrop's conclusions about the culture, drawn largely from the writings of 16th century Spanish historian Gonzalo Fernández de Oviedo, did more harm than good, being widely and incorrectly cited as evidence of violence, cannibalism, and trophy head-taking in precolumbian Panama.

A newly published report in the journal Latin American Antiquity by Nicole Smith-Guzmán and Richard Cooke of the Smithsonian Tropical Research Institute in Panama, however, calls into question Lothrop's sensationalistic interpretation of the Playa Venado skeletons through a reanalysis of archival documents, photographs, ethnohistoric accounts, and a subset of 77 skeletons that Lothrop sent back to the U.S., now stored at Harvard University.

Smith-Guzmán and Cooke first combed through Lothrop's original publication, finding that "through the use of repeated violent terms" -- such as 'mutilation', 'buried alive', 'teeth extracted', 'flesh stripped', 'decapitation', and 'hacked' -- "Lothrop paints a picture of ritual killing or sacrifice at the site." They further note that "the exaggeration of Lothrop's original claims in the literature and its impact on the overall understanding of precolumbian mortuary customs on the Isthmus warrants a closer scrutiny of the evidence he presents in his paper."

Lothrop's evidence for his hyperbolic paper title is shaky, but has made its way into Wikipedia as established fact. He suggests that "some [skeletons] were found with mouths open as if gasping for air; [...] open mouths may indicate burial alive." As jaw muscles relax after death, however, it is not at all unusual for the mandible to fall open. He notes that "we found several cases where finger joints were chopped off," and interprets tightly-flexed burials with displaced bones as evidence of broken necks and backs. Lothrop concludes his 1954 paper by saying that "many individuals either were killed or buried alive... other mutilations were either performed on the dead or must have caused immediate death."

In reassessing the skeletons in the collection at Harvard, Smith-Guzmán, who is trained in the analysis of human skeletal remains, found that only 11% of the skeletons had any evidence of healed trauma that occurred before death. Only one of those skeletons had trauma suggestive of interpersonal violence. "Skeletons from Playa Venado show very low rates of trauma in general," the authors conclude. Interestingly, this reanalysis matches well with a 1958 publication by T. Dale Stewart, a Smithsonian researcher considered by many to be the founder of modern forensic anthropology. Stewart also found no evidence of cut marks to back up Lothrop's idea of widespread mutilation, although he did note the presence of skulls affected by artificial cranial vault modification. 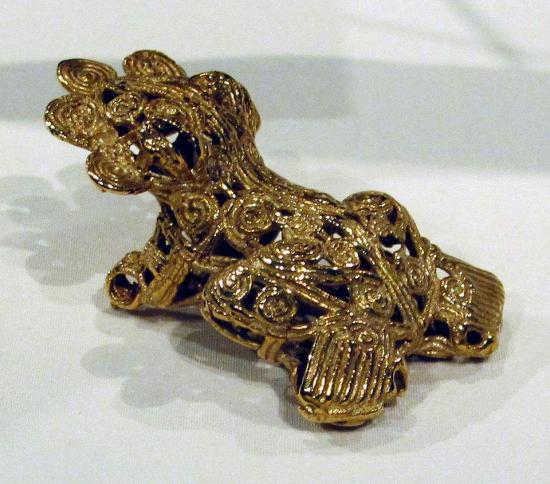 "Many Spanish chroniclers detail violent cultural practices of the indigenous populations they encountered" in Panama, Smith-Guzmán and Cooke write, and "these accounts of violent mortuary rituals may have influenced the interpretation of burials encountered in excavations [at Playa Venado], leading to claims of mutilations and sacrifice, with little to no evidence." Lothrop chose to see evidence of Oviedo's 16th century Spanish accounts of the native population in the 6th-9th century cemetery he was tasked with studying.

What the Spanish saw as suicide and sacrifice and Lothrop interpreted as the same, however, are in reality the less sensational and much more typical practices of ancestor veneration and secondary burial (any post-mortem manipulation of the dead body, including such activities as cremation). The archaeologists found that the age-at-death and sex distribution of the Playa Venado burials was normal, the amount of trauma discovered was normal, and the burial types were also normal with respect to other known precolumbian cemeteries in the area.

"Rather than an example of violent death and careless deposition," the researchers conclude, "Playa Venado presents an example of how precolumbian societies in the Isthmo-Colombian area showed respect and care for their kin after death."

Reinterpretation and reanalysis of work done at the very beginning of scientific archaeology is an important undertaking, which the work of Smith-Guzmán and Cooke clearly demonstrates. Investigating decades-old claims that, to 21st century ears, sound exaggerated is a meaningful contribution to our understanding of world prehistory and the people who came before us.