Associate Professor Mehmet Ozhanli, the head of Suleyman Demirel University's Archeology Department who heads excavations in the ancient city of Pisidian Antioch, said they had discovered remains of a church during their excavations.

"We have found the remains of a three-nave church one and a half meters below the surface," Ozhanli told AA correspondent. 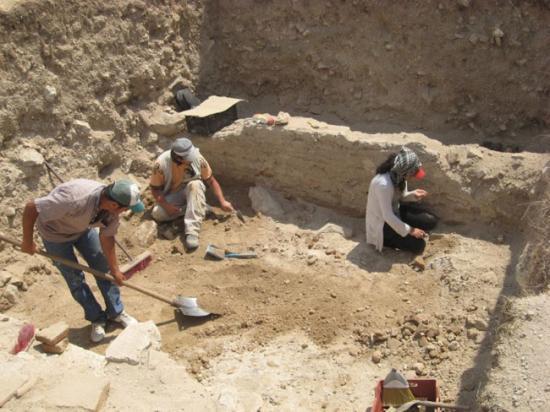 Ozhanli said the building was constructed as a Pagan temple, however it was converted to a church after the spread of Christianity.

"This is the fifth church we have brought to daylight in this ancient city," Ozhanli said.

Ozhanli said this recently found church was also below the Men Temple, and the number of churches in the area rose to six.

"This indicates that this area was an important center for Christianity, and it was the capital of Pisidia," Ozhanli said.

Pisidian Antioch (also called Antioch-of-Pisidia) was a major Roman colony that was visited by St. Paul on his First Missionary Journey. Pisidian Antioch marked an important turning point in Paul's ministry, as the city became the first to have a fully Gentile Christian community.

Situated on the southern foothills of the Sultan Mountains, Pisidian Antioch was spread over seven small hills in a manner reminiscent of Rome. The city was founded in the early 3rd century BC by the Seleucid dynasty.

It was one of 15 different cities named "Antioch" after several members of the family with the name Antiochus. The original settlers of the new Hellenistic city came from Magnesia on the Meander, a town near the Aegean coast.

The inhabitants of Antioch at this time were a mixture of Roman veterans and their families, descendents of the earlier Hellenistic settlers, and people of Phrygian and Pisidian background. Several of the Romans from Antioch became members of the Senate.

Around 50 AD, Paul and Barnabas visited the city and established a Christian community. The city continued to prosper in the 2nd and 3rd centuries, and in 295 AD it became the capital of Pisidia, a new province created by Diocletian. The theater was enlarged and anew agora and porticoes were built.

Antioch was the seat of the bishops of Pisidia, including Bishop Optimus who attended the Council of Constantinople in 381. There is no evidence of any churches before the 4th century, and Christians were actively persecuted under the governor of Pisidia in the early 4th century, Valerius Diogenes. But by the end of the 4th century, when persecuted had ceased, Antioch had between one and three church buildings.

Archaeological interest in Pisidian Antioch has been ongoing since its re-discovery in 1833 by British Chaplain F.V.J. Arundell.