This year’s excavations in the ancient city of Pisidia Antiocheia have unearthed a church that was discovered last year, bringing to four the number of Christian religious centers that have been discovered so far at the site

A church that was found last year in the ancient city of Pisidia Antiocheia in the southern province of Isparta’s Yalvaç district has been completely unearthed during this year’s excavations.

“The walls are completely covered with frescoes and there are many geometrical shapes featuring the symbols of Christianity,” said the head of the excavations, Professor Mehmet Özhanlı.

With the latest discovery, the number of churches discovered in the ancient city has reached four, he said.
Excavations in Pisidia Antiocheia have been carried out by the Süleyman Demirel University (SDÜ) for the past seven years. This year’s works ended on Dec. 1 in the ancient city.

Özhanlı, head of the archaeology department at the university, said the church was found last year and was completely unearthed this year during six months of work.

“We believe that the ancient city, which is made up of seven neighborhoods, is home to seven churches. It shows us that Pisidia Antiocheia, which played a significant role in the growth of Christianity, was a religious center,” he said.

Özhanlı said the structure was a three-nave church.

“The whole of the church floor is covered with marble plaques that we call ‘Opis Sectila.’ But most of them were removed and melted in a lime furnace close to this structure. Colorful marble was used in the main apsis. It is definite that the church survived until the 12th century just like the ancient city. The church was built on a temple that was built in the Antonine era. The four churches that we have so far discovered show that there were attempts to make the Roman-era Antiocheia a religious city. We know that the city was divided into neighborhoods. The four churches that were found in the northern part and the Saint Paul Church had a capacity of 300 people, while the other three had a capacity of at least 150 people.” 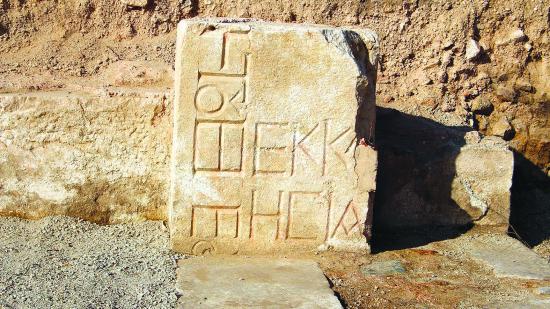 Özhanli said they had also found a stone tablet in the church. “It is known that there was a Tiberius Square here. But this tablet made us think that there was another square called Augustus Square. The tablet says ‘place of gathering for God’ in Latin. Also, the discovery of six tombs inside the church verifies that the churches served as necropolis during this era.”

The professor said long-term excavations had also provided them information about the history of the ancient city while simultaneously lamenting the lack of remains in the ground.

“At nearly two meters deep, we see that the foundations of the structures were protected. But in the details, it is possible to see the city’s magnificence since Antiocheia was a significant city in the Hellenistic era, the capital of colonization in the Roman era and it turned into a metropolis with Christianity,” he said.

Among the artifacts unearthed during the excavations was a naked sculpture of Aphrodite, said Özhanli, adding that many bone artifacts implied that the city had bone ateliers.

Özhanlı said the western gate had been restored this year and would soon be sent to the Antalya Regional Protection Board, adding that a bath-like structure in the ancient city had been reinforced.

A burnt layer that had been unearthed during excavations implied that a great fire occurred in the city, said Özhanlı.

In addition to the excavations, a catalogue of metal and stone artifacts, as well as a guide to Pisidia Antiocheia, were made in collaboration with the museum directorate in 2015, he said.