Pise (Italie): A medieval treasure in the tomb of Enrico VII 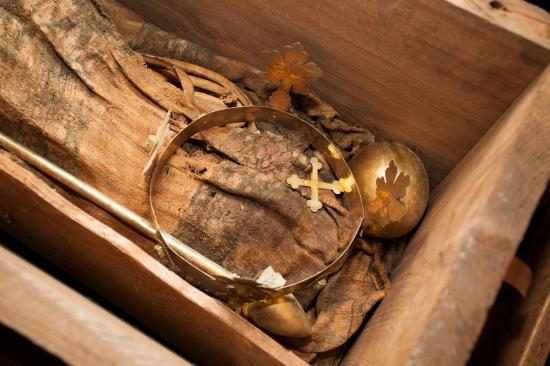 The sarcophagus was last opened in 1921 when, on the occasion of the 600th anniversary of Dante's death, the monument containing the remains of the Emperor Enrico VII was moved into the right-hand transept of the Cathedral in Pisa along with the grave goods. The opening of the tomb last year and the research, which is still in progress using the latest tools and technology, have served to uncover the real importance of the treasure which has been guarded in the coffin for seven centuries. As well as the symbols of power – a crown, a sceptre and a silver orb – a most unexpected find was uncovered: that of a rectangular shroud three metres long, a rare testimony of the noble production of silk textiles dating back to the beginning of the 14th century. Given the exceptional nature of the objects and the historical context referred to, it was decided to place the items from the tomb in the Museum of the Cathedral.

The inspection of the tomb was an extremely complex operation which saw the cooperation of the interested bodies: the Archbishopric and the ecclesiastical authorities of the Cathedral, the Opera della Primaziale Pisana foundation, the government department BAPPSAED and the University of Pisa, whose respective representatives have formed a committee to follow the various phases of the operation. When the seals of the last search area were broken the mortal remains of the emperor appeared inside the coffin, wrapped in a shroud on which lay the crown, the sceptre and the orb. The three objects immediately bring to mind the images of the emperor portrayed in the 73 miniatures giving an illustrated account of his journey through Italy, commissioned after 1330 by his brother Baldovino, Archbishop of Treviri, and now conserved in the Landeshauptarchiv of Koblenz. Inside the coffin, there was also a lead cylinder containing a parchment that was later found to have come from the 17th century and the investigation carried out at that time.

At this point, the real investigation which uncovered the true nature of the discovery began. It was immediately apparent that what had been defined in the 1921 report as "a fine shroud woven in bands" was actually an item of extreme interest for its singularity and consistency: it is in fact a large rectangular cloth, more than 300 cm long and 120 cm wide, made of silk in horizontal bands of around 10cm, with alternating colours, a reddish nut-brown (originally red) and blue, and particularly rich in symbolic significance. The blue bands are embroidered in gold and silver with pairs of lions facing each other, the most characteristic emblem of sovereignty, while a complex monochromatic tone on tone decoration, at present indecipherable, can be seen on the reddish bands. 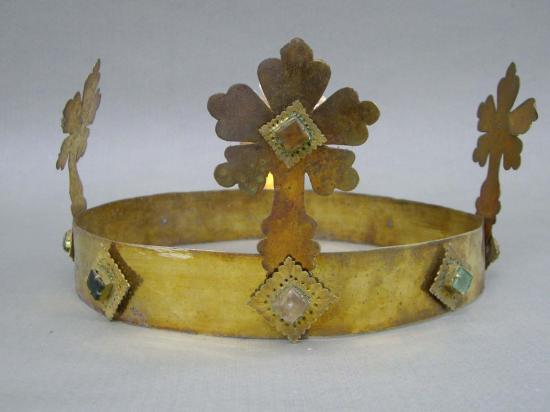 A crimson strip edged with yellow, placed at the top of the piece of fabric, bears traces of an inscription. The element which makes this relic singular, if not unique, is the selvedge edge along the length of the fabric and the checked bands at the shorter ends delimiting the beginning and end of the piece: this effectively defines the size of the shroud and can supply important information about its precise function. Other revelations about the remains of Enrico VII will soon be announced by Francesco Mallegni, an anthropologist from the University of Pisa, who recomposed the skeleton and the cranium which was badly damaged in the facial area. These interventions, with the necessary restoration processes and the use of specific methodology, have enabled an estimation of the height of the emperor, which appears to have been around 1.78 metres, and the age at which he died which seems to have been about 40. Further analyses of the tiny fragments sent to specialized laboratories will be able to offer new information about his state of health, the cause of death and the treatment of the emperor's body after his premature death in Ponte d'Arbia in 1313.