Coast with the most

Marean suspects that such excavations will demonstrate that an increasing taste for catfish and other water creatures accompanied increases in brain size among early Homo species. Stone Age people exploited that evolutionary endowment at Pinnacle Point, putting their outsized brains together to solve the puzzle of the tides, Marean says.

Protein-rich shellfish, loaded with omega-3 fatty acids crucial for brain development, led to further social innovations, including a move from eating for now to organizing seaside harvests for later, in his opinion. If so, a sense of time needed to plan for the future characterized the human species almost from its start about 200,000 years ago.

Marean’s team previously reported that mounds of brown mussels and local sea snails excavated in one Pinnacle Point cave date to 164,000 years ago, providing the earliest evidence of coastal dwellers scarfing shelled food with relish, if not condiments (SN: 10/20/07, p. 243). 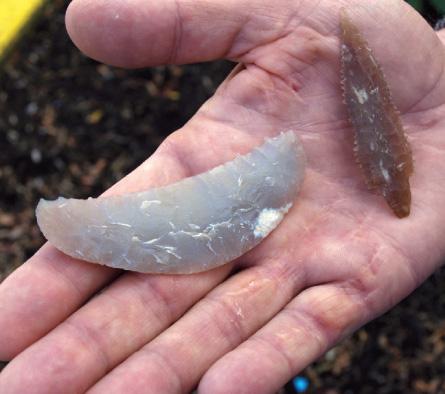 Stone tools from Channel Island sites dating to 12,200 years ago suggest that the first colonizers to the New World may have come by sea. Univ. of Oregon

The researchers have since found that, by 110,000 years ago, limpets and sand mussels joined the menu. Shellfish foragers face their own brand of perils, Marean explains. Mussels, limpets and sea snails live in treacherous rocks that border the ocean. If the tide is not at its lowest, incoming swells can easily knock collectors onto sharp rocks or into the sea.

The cave excavated by Marean’s group sat two to five kilometers inland around 164,000 years ago, when sea levels were lower than today. Early foragers must have scheduled their activities around the best times to go to the coast for shellfish. When tides were high, foragers instead headed inland eight to 12 kilometers to exploit other foods in South Africa’s rich Cape Floral Region. This 90,000-square-kilometer strip curves around the bottom of Africa like a half-smile. Many plants in the Cape Floral Region produce edible geophytes, underground energy-storage organs that swell with carbohydrates at certain times of the year.

Coastal residents dug up geophytes and hunted inland game until the moon issued a call to the sea, Marean proposed at the anthropology meeting. When the sun and moon align, their combined gravitational forces cause daily tides to spring back and forth from extremely low to extremely high levels. Such spring tides, a twice-monthly effect that has nothing to do with the seasons, correspond to full and new moons.

Access to shellfish wasn’t always available during the Stone Age, though. Climate and environmental records indicate that South Africa’s coastline repeatedly advanced and retreated between 195,000 and 123,000 years ago. Thanks to a gently sloping continental shelf off much of the coast, as much as 95 kilo­meters of land was exposed when sea levels retreated during that period, Marean and his colleagues estimate.

Pinnacle Point attracted human visitors when its caves lay within about a day’s walk of the sea, the scientists assert. This off-and-on shoreline access over tens of thousands of years was enough to trigger big lifestyle changes. “Organizing foraging activities around a complicated system of tidal timing had a trickle-down impact on social life,” Marean says.

Tide tracking’s domino effect on mental and social life may have given modern humans a survival advantage when they met European Neandertals after leaving Africa. Caves overlooking the Mediterranean Sea in southwestern Europe contain remains of fish, seals and dolphins, as well as mollusks, eaten by Neandertals toward the end of their evolutionary run around 42,000 years ago (SN Online: 9/22/08). But these Neandertal caves contain no huge shell heaps that suggest that coastal visits occurred at tidal low points, when masses of mollusks lay exposed, Marean argues.

It seems that hungry Homo sapiens patiently consulted the moon, whereas Neandertals heeded the urgency of their grumbling bellies.

Tide tracking at Pinnacle Point led to expanding numbers of people who eventually turned to sea travel to find virgin territory. These seafood-lovers may well have colonized the world.

Starting around 50,000 years ago, ocean voyagers based in Asia fanned out across the Pacific to Australia and points beyond. These mariners have sailed under the radar of many scientists seeking the earliest settlers of the Americas, Oregon’s Erlandson asserted at the anthropology meeting.

Inland sites in North America contain stone points and mammoth bones that have nurtured a decades-old idea: The New World was first colonized by Asian big game hunters who crossed a land bridge to Alaska around 13,000 years ago. A corridor through massive ice sheets ushered these intrepid carnivores into what’s now the United States, where they founded the Clovis culture, named after a New Mexico site that has yielded stone spear points.

It’s now an open question whether the Clovis-first hypothesis will hold up, Erlandson says. In the March 4 Science, he and his colleagues reported that people lived on California’s Channel Islands by about 12,200 years ago. A sea cruise of nine to 10 kilometers was required to reach these ocean outposts.

Three Channel Island sites — seasonal camps, most likely — yielded narrow-stemmed stone points and crescent-shaped implements, lying among bones of seabirds such as geese and cormorants, seals and other sea mammals, and several types of fish. Piles of shells from red abalone, giant chiton, mussels and other shellfish also turned up.

Stone tools found on the Channel Islands look nothing like Clovis points. In an upcoming Quaternary International, Erlandson and Todd Braje of Humboldt State University in Arcata, Calif., argue that stemmed stone points found on the islands instead resemble those that have been found at coastal sites stretching from Korea, Japan and northeastern Russia to North and South America.

These finds date to between 35,000 and 15,000 years ago in Asia, and to as early as 14,500 years ago in the Pacific Northwest, Erlandson said at the meeting, supporting his suspicion that initial New World colonists used canoes or other vessels to navigate along the coast from Asia to the Americas. Stemmed points found around lakes and marshes in western North America look like Channel Island finds, indicating that coastal people not only cruised the open sea but headed inland, possibly to trade for goods with Clovis people, Erlandson says.

“We have to start creating new models of the peopling of the Americas,” he says. “Received wisdom and a good story can inhibit research for decades, as happened with the Clovis hypothesis.”

Encroaching oceans also inhibit investigations of humankind’s water-traveling ancestors. A global sea level rise of about 120 meters between 20,000 and 6,000 years ago flooded shorelines and nearby lowlands where ancient populations presumably camped. “Current evidence for Stone Age coastal occupations represents the tip of the iceberg,” Erlandson says.

Coastal caves bearing stone tools and seafood remains from more than 164,000 years ago may yet be found, he asserts. And shellfish gathering requires no special knowledge, tools or personal risk if the tide happens to be out. Coastal baboons in Africa collect and eat shellfish. Seagulls drop mussels and other tidal treats on hard ground to break open shells, leaving behind what sometimes looks like human garbage, Klein says. Also, abundant archaeological evidence of fish eating by Europeans and Africans dates to no more than 50,000 years ago, long after brain size had ballooned.

“It will take a long time to test my hypothesis about an ancient coastal adaptation in South Africa,” Marean acknowledges. Prime shoreline camps from long ago undoubtedly lie under­water, “guarded by great white sharks and dangerous currents,” he says.

He and his colleagues are now exploring more caves at Pinnacle Point and have expanded their search to caves on South Africa’s eastern coast. Some of these sites are located where the continental shelf drops steeply and the coast was always near, possibly giving researchers access to ancient camps that never got inundated by the ocean.

Marean looks forward to further encounters with long-dead lunar tide trackers. This is, after all, no fishing expedition.