Findings of the Excavation at Pingtou Site in Hequ, Shanxi

The Pingtou site was located 300 meters west of the Pingtou village in Liujiata Town, Hequ County of Shanxi Province. In order to facilitate the development of infrastructure, the Shanxi Provincial Institute of Archaeology joined with Cultural Relics Office of the Xinzhou City and the Hequ County Museum had conducted a rescue excavation at the site. The excavation was divided into two stages, the first stage was from 14 Oct to 18 Nov 2009 and the second stage lasted from 4 April to 4 June 2010.

The area of two excavations was around 700 square meters. Cultural deposits and findings were relatively simple as they mainly belonged to the Longshan Period without features from other period. Moreover, rich information had been retrieved through the excavation of actual findings. Altogether features included as five houses (cave dwelling), four pottery kilns, a burial, and thirty-six ash pits or other suspected storage pits. Besides, large amount of pottery, stone and bone tools were yielded. 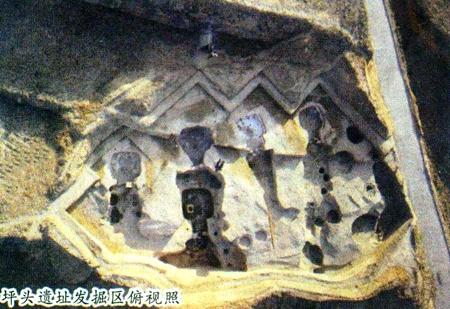 All of cave dwelling were situated in the North and faced South, with identical structural formation and characteristics. The cave dwelling were protruding type with circular corner and the interior size were around 11-13 square meters. The cave dwellingof F5 was the largest, not exceeding 21 square meters. The cave dwellingswere formed by cave, door and courtyard, which the cave located at the northeast, the door and the courtyard were facing southwest. And the caves of cave dwellingwere square with circular angle when viewed from top. The entrance was protruding from outside and the shape of the courtyard was in either strip or trumpet shape extended to the exterior. Each cave dwellingconstructed individually with a single courtyard, and a closed unit was formed. The bottom of the cave was the largest and gradually diminishes upwards. The highest remaining wall of the cave was around 1.9 m and there was a round hearth in the center of the cave, some of which were decorated with a triangular pattern. The interior of the doorway was wider than the exterior and the entire doorway and the cave were blended together. The exterior of the entrance was a door formed by walls made of rocks with 0.5 m width in general. In some cases, stone anvil can be found with clear using traces. Thus, it was assumed that the door was open from inside. In fact, the cave and doorway were a completed entity; a lime layer can be identified from cave room to the entire doorway. The lime can be found not only in the floor of the fireplace, but also in the bottom part of the walls inside the cave and doorway with 0.6m in height. The treatment of the lime layer in the floor and wall was in an exquisite manner. The courtyards were in subterranean style and most of them were lower than the height of the cave with multiple stepping surface, which seems to be the result of repeated action. Even though each cave dwelling was constructed individually, it was confirmed that F1, F2, F3 and F4 were lined from East to West with 2m apart. Judging from their stratigraphy and locations, these four cave dwellings belonged to the same period. 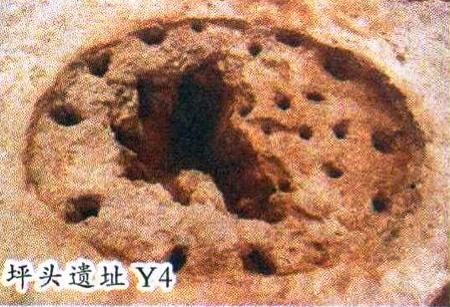 Pottery kilns can be found around the rest of the four other cave dwellings excepting F5 which courtyard was disappeared by later disturbed. Most of the pottery kilns were constructed in subterranean style in east and west side of the courtyard. The structure of the kiln can be divided into horizontal and vertical styles. The size of horizontal was bigger and formed by five components including an entrance, fireplace, hallway, kiln room and kiln stand. Both sides of the entrance were formed by rocks and connected with the fireplace through a hallway in order to form a completed firing space. The hallway was separated into two parts, the fireplace and kiln room were interconnected by a kiln stand in a slender style. The kiln room was located on top of the hallway in either oval or circular shape viewed from top. According to the remnants inside the kiln room, it was assumed that the structure was appeared in an arch shape. Vertical style was relatively small formed by four components including the entrance, fireplace, kiln room and kiln stand. In compared with the horizontal style, no hallway can be found; the kiln room was constructed on top of the hallway. The opening of the fireplace was small with a wide bottom. A number of vertical windows were connected to the kiln room. The interior of the kiln room was in circular shape. From the distribution of the pottery kiln, they had a close relationship with the cave dwelling. Judging from the stratigraphy, the construction period of the pottery kiln was not earlier than the cave dwelling. In connection with the discovery of greenware in large amount located in the interior of individual cave dwelling, it was concluded that individual cave dwelling were used for pottery making in certain period.

Only one burial can be identified and it was a vertical earth pit with two human skeletons overlying. The child skeleton was on top whereas the adult was at the bottom. The direction of the child’s head and adult was different. The adult skeleton was female and preserved in good condition in flexed position. A decoration made of animal bone can be found in her right arm. Based on the stratigraphy, this context was belonged to the latest period.
Other than that, a number of ash pits and storage pits were scattered around the cave dwelling with circular shape, oval shape and irregular shape. Most of these pits shaped like a pot bottom.

Copious amount of pottery, stone and bone tools were yielded and the majority was pottery. Among the pottery, most of them were li and pot, and the sum of these two types of artifacts was more than fourth-fifth of the total artifacts. Moreover, there were small number of basin, stem cup, urn, lid and so forth. Most of the stone tools were polished tools including axe, knife, shovel, pestle, awl and arrowhead. Bone tools include bone needle, awl and decoration.

Through archaeological survey, at least four cave dwelling were being discovered in a small area located in the exterior of the excavation area. From the combination of an individual house foundation together with the rest pottery kiln and the architectural cluster, the site of Pingtou fully exposed the major characteristics of the Northwestern Shanxi district settlement during the Longshan Period. Cave dwellings with an individual courtyard in Pingtou site were rare in the Northwestern district of Shanxi. The discovery of Pingtou site in Longshan Period provides more information and research materials of that area during the Longshan Period. Such information also contributes a more comprehensive chronological order and framework during the Neolithic Period of that particular area.