Silent mounds tell of the past

The once powerful Calusa civilization inhabited the Pineland archaeological site until the 1700s, and now Calusa Heritage Day shares what research has revealed about the place. 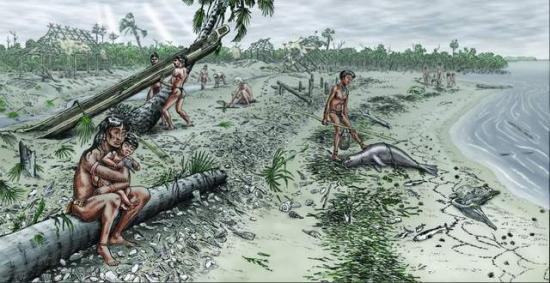 Storms have battered Pineland throughout the centuries, but in the year 300 AD, the archaeological record shows a particularly fierce hurricane. / Merald Clark/special to news-press.com 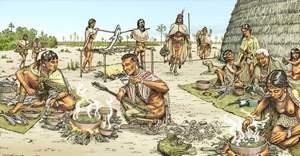 The Calusa used Pine Island Sound’s bounty for food, firewood and building materials, but around 850 AD, sea level receded so far that the sound emptied and the Calusa abandoned Pineland until sea levels rose again. / Merald Clark/special to news-press.com

For at least 2,000 years, humans at Pineland have likely looked at the sky and wondered the same things: “What’s the weather up to?” and “How will it affect me?” And for the last 15 years, scientists have studied the ancient humans who lived on this little piece of Pine Island to learn how the weather and other environmental forces affected them.

The short answer? A lot, says Karen Walker, research and collections manager of archaeology at the Florida Museum of Natural History, which runs the Randell Research Center at the Pine Island archaeological site, which was a Calusa Indian town for more than 1,500 years.

The center’s scientists and volunteers don’t just research the lives of Florida’s first people; they share the knowledge. Indeed, the center’s motto is “As we learn, we teach.”

The learning and teaching go on year-round, but it’s all celebrated annually at the 60-acre center’s showcase event: Calusa Heritage Day this Saturday. It’s a chance to learn about pre-Lee County Southwest Floridians — the ones who built massive shell mounds along the region’s coast and dominated the southern peninsula until the Spaniards arrived in the early 1500s.

The event has offerings for all ages and interest levels, with tours, speakers, craft demonstrations, storytellers, kids’ activities, artists and food.

Walker, the keynote speaker, will focus on what scientists have learned about the Calusa and their environment since research began on the site.

“In the very earliest days, we’d stand on top of the mound and say, ‘Imagine that once, this entire area around us was full of houses and people and activity and so on and so forth, and we were completely wrong about that,” Walker says. “What we learned over years was at the height (of Calusa culture), the people were only living on top of the mounds.” That’s because what we see today as dry, habitable land was often underwater.

The ongoing research has shown just how much the Pineland landscape has changed over the centuries as climate and sea level have fluctuated. From cool and dry to warm and wet, the landscape at Pineland has varied widely over the years, and its inhabitants have had to adapt accordingly.

Archaeologists see evidence of this in the kind of trees they used for firewood and what animals they ate. Whether they were cooking over black mangrove or slash pine and whether seal or snook was on the menu can help researchers understand what the ancient climate was like, Walker says.

The information coming from Pineland on historic sea level variations can help us understand climate fluctuations over time, says Walker’s colleague, Bill Marquardt, the center’s executive director and curator for archaeology at the Florida Museum of Natural History at University of Florida, Gainesville. Using archaeologiocal research to track the past can help scientists understand the present, he says.

THE CALUSAS
They disappeared centuries ago, leaving only glimpses of their life buried below mounds of shells and sunken in muck.
What clues we do have about the Calusa Indians — who called Southwest Florida home for thousands of years before Europeans arrived in the 1500s — come from the firsthand accounts of Spanish explorers and what lies beneath the shells and mud.
We don’t even know for certain why they built the huge shell mounds for which they’re known.
Probably, the mounds served multiple purposes, archaeologists say: as strategic look-out points, a way to manifest power, an escape from bugs and flooding and a place to discard the refuse of their fish- and shellfish-based diet.
This much is understood: The tall, strong Calusa were hardy survivors who developed a complex society that wielded great regional power. They demanded — and received — tribute and riches from as far away as the Keys and were known as “The Fierce People.”
They collected their food from the sea and the land, built thatch huts, engineered canals and earthworks, held spiritual beliefs and practiced burial customs, established an empire, and crafted tools, utensils and artwork from bones, shells, clay and wood.
Wooden bowls and cups; pottery; painted, carved-wood masks; tools and hunting equipment; fishing hooks and nets; and simple, decorative paintings have been uncovered at archaeological sites stretching from Collier to Charlotte counties.
The Europeans’ arrival was the beginning of the end of the Calusa. They resisted ferociously, never accepting Christianity as many other groups did, but within 200 years, enslavement by the British and disease had claimed most of them, though a small number fled to Cuba. By the mid-1700s, their mounds stood empty.
— The News-Press archives contributed to his report