By the time Capt. John Smith rowed up the Patuxent River in the summer of 1608, indigenous people had been gathering at present-day Pig Point for thousands of years. 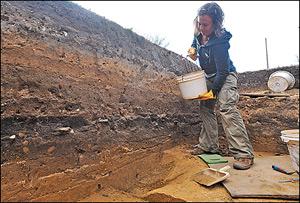 Erin Cullen of the Lost Towns Project lifts a bucket of excavated earth, perhaps laden with artifacts, out of a pit at Pig Point last fall. Notice the layers of earth marked by different shades and texture and the line of artifacts in the wall. She had just excavated the rounded depression in front of her, which might have been a fire pit hundreds of years old. – Joshua McKerrow

The Pig Point dig in south county is turning up Native American artifacts thousands of years old. Had Smith gone another couple miles up river, he might have come upon what Anne Arundel County's Lost Towns Project has uncovered - a mother lode of evidence indicating generations of settlement, fishing and hunting on a knoll overlooking Jug Bay.

Multiple excavations at the site have borne some of the oldest artifacts found in the Mid-Atlantic states - pottery, arrow and spear points and remnants of wigwams, fires and foodways - and there likely is more to come. "They could have been here for 10,000 years," said Al Luckenbach, the county's archaeologist. "We have carbon-dated artifacts 8,500 years old." Luckenbach and his colleagues likely have uncovered a site spanning the range of human settlement in the Mid-Atlantic. "And the site provides the most intact layer after layer of artifacts that I know of," he said.

What makes Pig Point stand out is the depth of archaeological evidence all in one location. He explained that other sites may have artifacts just as old but they usually are spread several levels apart - one layer of pottery from the 12th century, for instance, then another layer three or four feet deeper.

At Pig Point the artifacts have been found buried together, one period to the next stacked on top of one another. The settlement likely served as a base camp for multiple bands of native Americans. Algonquin peoples and their predecessors likely were drawn to the shallows of Jug Bay and its wealth of fish, shellfish and other sources of sustenance. There also is evidence it was a center of trade. Several artifacts, such as a rolled copper bead, or points made of stone found in Ohio, have been unearthed.

The array of artifact types previously only found far from this area has archaeologists and historical anthropologists scratching their heads. It seems every shovel thrust into a pit at Pig Point turns up a new question along the same theme: "Now, how did that get here?"

The digging at Pig Point began in earnest in 2009 with funding from the Maryland Historic Trust aimed at locating and analyzing Middle Woodland period (0 to 500 A.D.) prehistoric sites. The Lost Towns Project had been digging prehistoric sites over the years, searching deeper and in more detail many Native American settlements mapped out over a generation ago.

It also came about through the publicity-shy property owner's willingness to allow big chunks of his property to be dug up and sifted for the sake of historic curiosity.

One of the first finds that sent chills up the spines of the archaeologists was a few dark smudges in the dirt.

Those round spots turned out to be the remnants of saplings thrust into the ground for a wigwam, the oblong shelters favored by the indigenous people of the region. Amazing enough. Then they found another row of posts, then another. "We have the oldest structures ever found in Maryland," Luckenbach said. "And the first found in Tidewater Maryland,"

Wigwam evidence found in the state includes two in Montgomery County dating from about 1300 and another in Cumberland circa 1500.

Pig Point's wigwams, thought to be about 16 by 12 feet, are considerably older. The first was about 800 years old. Carbon dating on the other post holes showed they were even older - one from the 6th century and another from the 3rd century.

At roughly the same time, staff archaeologists and a steady crew of interns and Lost Towns' volunteers were finding all matter of artifacts spanning the centuries.

It seems every layer uncovered in the methodical system utilized by archaeologists has turned up another eureka moment. If not a piece of pottery preceding the birth of Christ, it was an even older spear point.

"The site never ceases to amaze me," said Dennis Curry, senior archaeologist at the Maryland Historical Trust. "They continue to find something new, so far out. You have heard of this stuff being found in Tennessee, or Western Maryland, or elsewhere ... but you are finding everything at this one site."

Crews have found preserved bone tools, arrowheads made of deer antler, needles and awls made of bone, flaking tools, plus shards of pottery, clam shells, fish and wildlife bones.

And then there are the points - arrow points, spear points, some in the familiar triangle shape, others rounded, still others longer oblong affairs. The oldest, a Palmer point, could be 10,000 years old. Pig Point also is the farthest south Archaic triangle points have been found. Previously a New Jersey site, well-known among archaeologist as Abbott Farm, south of Trenton, was the southernmost location the Archaic period points had been found. Other points found include Piscataway points from roughly 1,000 B.C. Bifurcate points dated at 5,000 B.C. also were unearthed.

Pottery found at the site includes the first intact native American pot Luckenbach has ever held. "I never dreamt I would find an intact Indian pot," he said at the time. The 2.5-inch paint pot was found next to a heavily burned fire pit along with pieces of unfired clay, leading county staff to believe it got lost under the fire built to fire a batch of pottery. Carbon dates from that layer of the dig have run from 1260 to 1320 A.D.

A tube pipe circa 500 A.D. and chunks of a gorget, a semicircular stone worn around the neck, are among the other prominent finds.

Another chunk of pottery, this one with fancy decorations and an unusual pie-shell edge, was carbon dated to 350 B.C.

But the vast majority of the more than 400,000 artifacts dug up in the past three outdoor seasons at Pig Point are small bits of pottery, stone points, seeds, animal and fish bones.

"The range of artifacts is unmatched by any other site in Maryland," Curry said. "Some of them are totally bizarre.

Maryland's coastal plain has a surface that has been stable for hundreds of thousands of years - things don't get covered up and layers of stuff get piled together. "You'll get some sites that have prehistoric material mixed up with 18th or 19th century housewares all with farmer Brown's pickup parked on top of it," said Joe Dent, an archaeologist and anthropology professor at American University. "It is a far better scenario to find deposits that have not been disturbed by other groups, and that is what is so unique at Pig Point."

"If you had asked me five years ago if we would find anything like this in Maryland, I would have said I doubt it."

The Monocacy site, a famous archaeological feature on the National Register of Historic Places near the convergence of the Monocacy and Potomac rivers in Frederick County, has similar stratified layers of artifacts deeper than the site here. But there are gaps - there could be a foot or two between layers of artifacts. But not Pig Point, where layer after layer yields artifacts.

"That's the beauty of Pig Point. It is an archaeological layer cake," Dent said. "Archaeologists work from the top layer. It's like stepping down into a time machine." Aside from the depth and plenty, it's the unusual items found there that have sparked interest and wonder. Dent said the artifacts found at Pig Point are unique to state archaeology.

There are items uncovered there from the Adena mound building cultures of the Midwest, for instance.

He wonders what might have brought such material to Pig Point. One theory is that the native peoples used unique items as totems or ascribed unusual items with special powers.

"They collected things like we do. A big shark's tooth is a big shark's tooth," he said, speaking to a theory that some of the native peoples could have trekked to present-day Calvert Cliffs in search of souvenirs. "During that era anything that made you different had power," Dent said. He noted finding oysters shells at a village site up the Potomac River with holes drilled in them, worn on a necklace. There were no oysters found that far north. "The person who wore it had power," he said, whether it be within the group or with his or her deity.

But why would it all converge at Pig Point? Theories abound. It simply could have been the wealth of natural resources available, plentiful fish, shellfish, deer and other critters that would provide sustenance in the earlier periods of hunting and gathering. The low-lying fertile land would serve well for planting once agriculture became a primary foundation in the Middle Woodland period (1 A.D. to 500 A.D.) and later Algonquin culture in the Late Woodland period (roughly 500 A.D. to 1,000 A.D.), and later.

Dent thinks the far-flung objects found could have been brought here by tribes seeking unique materials. That could be how Ohio-area points and other items came to the shores of the Patuxent.

These are all questions that will take further research and study. The wealth of artifacts found so far will keep the Lost Towns staff and scores of interns busy for years. And there will be more to come.

After two full seasons of digging, the thousands of artifacts uncovered at Pig Point have been moved to the county archaeology lab at Historic London Town and Gardens in Edgewater.

There every piece is meticulously cleaned, numbered and cataloged. Then the study can begin.

About the only thing staffers and volunteers can't do there is carbon dating, which is a way of determining the age of certain archeological artifacts of a biological origin up to about 50,000 years.

The lab also is a branch of the county library. On shelves covering one wall is the county book collection on all things archaeological and county-specific history and architectural tomes.

Now with spring upon us, the crews will return to Pig Point, exploring a wider area below the top of the knoll where the previous two years' work concentrated.

"We found a spot down the hill at the end of last year that is as astoundingly deep and full of artifacts as at the top of the hill," Luckenbach said.

He intends to dig smaller test pits to try to establish how wide an area the settlements along the river covered.

It is the final year of a Maryland Historic Trust grant that has helped fund the work. But Luckenbach and staff are always digging for more grant money and donations to keep it going.

Funding from the county serves as a basis for matching funds from grantees - without it the work might not move forward. "We have been able to generate $2 for every dollar the county provides," Luckenbach said. "We will be able to carry on through the summer."

So they are back at it at Pig Point, digging and scraping, sifting and sorting, finding out who we are.