Phylogenetic analyses suggests fairy tales are much older than thought 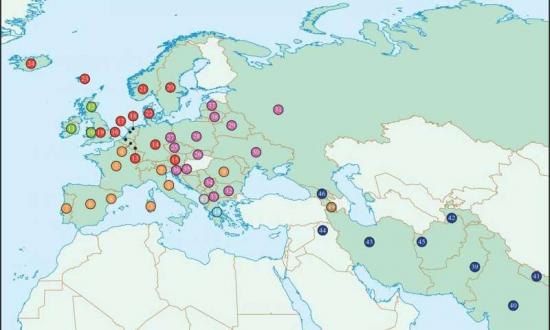 Approximate locations of Indo-European-speaking populations in Eurasia. Points are colour-coded by linguistic subfamily: red, Germanic; pink, Balto-Slavic; orange, Romance; green, Celtic; blue, Indo-Iranian; Turquoise, Hellenic; grey, Albanian; brown, Armenian. Credit: Royal Society Open Science, Published 14 January 2016.DOI: 10.1098/rsos.150645
A pair of researchers has conducted a phylogenetic analysis on common fairy tales and has found that many of them appear to be much older than has been thought. In their paper published in Royal Society Open Science, Sara Graça da Silva, a social scientist/folklorist with New University of Lisbon and Jamshid Tehrani, an anthropologist with Durham University describe the linguistic study they carried out and why they believe at least one fairy tale had its origins in the Bronze Age.
Fairy tales are popular the world over, some so much that they have crossed over into multiple societies—Beauty and the Beast for example, has been told in one form or another across the globe. Modern linguists and anthropologists have set the origin of most such fairy tales to just prior to the time they were written down, which would make them several hundred years old. But this new research suggests they are much older than that, with some going back thousands of years.

To come to these conclusions, the researchers applied a technique normally used in biology—building phylogenetic trees to trace linguistic attributes back to their origin. They started with 275 fairy tales, each rooted in magic, and whittled them down to 76 basic stories. Trees were then built based on Indo-European languages, some of which have gone extinct. In so doing, the researchers found evidence that some fairy tales, such as Jack and the Beanstalk, were rooted in other stories, and could be traced back to a time when Western and Eastern Indo-European languages split, which was approximately 5,000 years ago, which means of course that they predate the Bible, for example, or even Greek myths.

The researchers placed confidence factors on different results, depending on how strong the trees were that could be built—some were obviously less clear than others, but one fairy tale in particular, they note, was very clear—called The Smith and The Devil, they traced it back approximately 6,000 years, to the Bronze Age.

Notably, Wilhelm Grimm, of the famous Grimm brothers who published many fairy tales back in 1812, wrote that he believed the tales were many thousands of years old—that notion was discredited not long after, but now, the researchers suggest, they believe he was right all along.

Abstract
Ancient population expansions and dispersals often leave enduring signatures in the cultural traditions of their descendants, as well as in their genes and languages. The international folktale record has long been regarded as a rich context in which to explore these legacies. To date, investigations in this area have been complicated by a lack of historical data and the impact of more recent waves of diffusion. In this study, we introduce new methods for tackling these problems by applying comparative phylogenetic methods and autologistic modelling to analyse the relationships between folktales, population histories and geographical distances in Indo-European-speaking societies. We find strong correlations between the distributions of a number of folktales and phylogenetic, but not spatial, associations among populations that are consistent with vertical processes of cultural inheritance. Moreover, we show that these oral traditions probably originated long before the emergence of the literary record, and find evidence that one tale ('The Smith and the Devil') can be traced back to the Bronze Age. On a broader level, the kinds of stories told in ancestral societies can provide important insights into their culture, furnishing new perspectives on linguistic, genetic and archaeological reconstructions of human prehistory.