Thousands of curious people came to the field of Phu My village in Ngoc My commune, Quoc Oai district, Hanoi, on December 10 to see the excavation of a 300-year tomb. 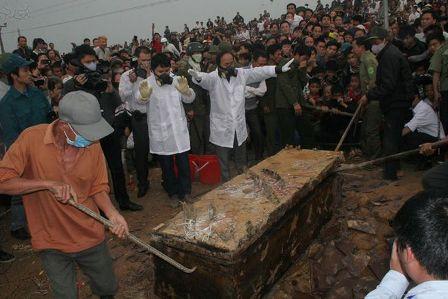 A noblewoman is in the grave?

The excavation of the ancient tombs dating back approximately 300 years was conducted on the afternoon of December 10, led by famous archaeologist - Dr. Nguyen Lan Cuong from the Vietnam Institute of Archaeology.

The ancient tomb was discovered on the afternoon of December 7 by a group of workers who were building a road and an irrigation work in Phu My.

This group of workers exposed three coffins, including two normal wooden coffins and a special one with two layers and spreading the scent of attar.

Thinking that this was an ancient tomb, the workers had informed the local authorities.

The ancient tomb was discovered in an area called Ba Chua fields. The coffin is nearly two meters in length, 60cm in width, with three layers: the outer layer is wood, the glue in the middle, and the final is timber embalmed with attar.

After the coffin was exposed, every day thousands of people flocked to the field to see it. They believed that the one in the coffin would be a noble-person and he/she would be buried with valuable items. 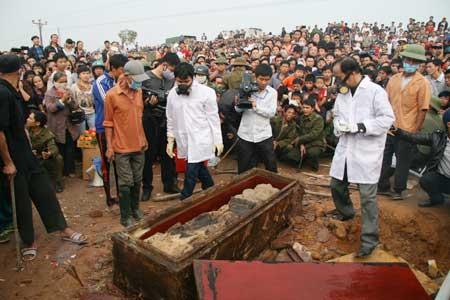 The discovery was reported to the Hanoi Department of Culture and Information. On December 10, Dr. Nguyen Lan Cuong and experts excavated the tomb.

It was very hard for the team to open the coffin. The glue in the middle layer smelled of an exotic fragrance.

The dead was carefully wrapped in cloth and the body was still intact, with teeth, hair, etc. Experts said that this is a mummy.

Dr. Nguyen Lan Cuong said this is the ancient tomb of a woman. Hundreds of similar tombs have been discovered in Vietnam. This kind of tomb was built in the Later Le Dynasty, in the northern region of Vietnam, about 30 years ago or in the Nguyen Dynasty in the south, about 200 years ago. 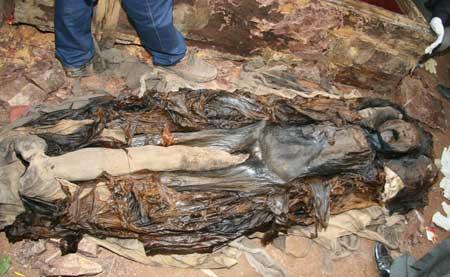 Cuong said this tomb is quite different from other tombs of its type. Firstly, the body was surrounded by silver paper, while in similar tombs, the dead were surrounded by pillow. Secondly, there is no solution in the coffin.

Cuong also said that ancient people made the outer layers first, then placed the coffin inside it. The outer layers were made by rice, mixed with mortar and molasses. In the other tombs, the coffins were fixed by nails while this coffin used bolts.

Many families recognize the dead as their ancestor

After the discovery of the tomb, many families in Ngoc My commune said that the woman is their ancestor. The Doan family pitched a tent near the coffin to take care it.

Mr. Doan Manh Ha, head of the Doan family of the 15th generation, said that in the afternoon before the workers dug up the tombs, he told them to stop digging in this area because there were tombs of his family in this area. 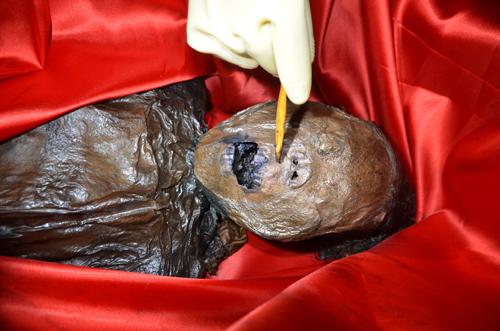 "Several hours after I told them to stop digging our family’s tombs, they found the three tombs. I asked Mrs. Doan Thi Chuyen, 94 and Mrs. Do Thi Chum – the two most senior people in our family and they confirmed that these tombs belong to our family,” Ha added.

“They said that there were two long tombs and one short tomb in that field and in fact it is true. We buried the two other tombs while the government held the ancient tomb. Last night I met with the most senior people in our family to check our family annals again. According to the annals, many people in our family were mandarins in the Le Dynasty," Ha said.

At the same time, some other families claimed that it is the tomb of their ancestor.

Dr. Nguyen Lan Cuong said that DNA tests would be made to define the owner.