Cambodian archaeologist Tep Sokha studies bone from a jar in a cave at Phnom Pel, southwest of Phnom Penh, on March 24, 2013. Ten jars, dating from the 15th to the 17th centuries, and twelve coffins—the earliest from the 14th century—have been found at the site.

Over a hundred 'burial jars' and a dozen coffins arranged on a ledge in remote Cambodian jungle have for centuries held the bones—and secrets—of a mysterious people who lived alongside with the Angkor era.

Why the bones were placed in jars on a cliff some 100 metres (320 feet) high in the Cardamom Mountains, or indeed whose remains they are, has long puzzled experts.

For seven years Nancy Beavan, an archaeologist who specialises in carbon dating, has been looking for an answer, painstakingly piecing together clues left by the enigmatic people at 10 sites dotted across the area in southwestern Cambodia.

Tests show some of the bone fragments are six centuries old, according to the New Zealander.

"Why put these bones in jars? This was a practice that was not observed in any other part of Cambodia," she said.

Ten jars, dating from the 15th to the 17th centuries, and twelve coffins—the earliest from the 14th century—have been found at the Phnom Pel site.

Some are believed to have come from the kingdom of Siam, now Thailand. Others, a minority, date back to the powerful kingdom of Angkor, which ruled for six centuries and built the famous Angkor Wat temple complex further to the north.

But experts remain mystified as to why the bones were preserved in a Buddhist country where cremation is—and was—a key religious custom. 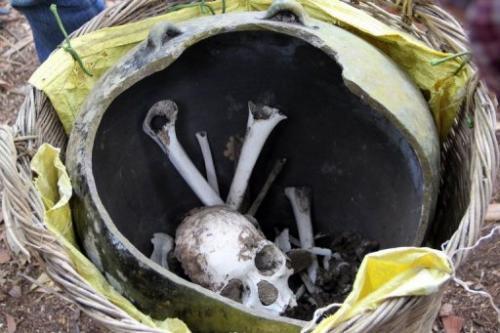 A skull and bones in broken jars in a remote Cambodian jungle, on January 7, 2013. Why the bones were placed in jars on a cliff some 100 metres (320 feet) high in the Cardamom Mountains, or indeed whose remains they are, has long puzzled experts.

Tep Sokha, an expert in Cambodian ceramics, said the jars are of the "highest ceramic quality" and the number indicates that "this was a sacred and widely practiced ritual."

If villagers living near the cliff were aware of the jars, they have stayed away, allowing foreigners to study the relics at their leisure. And the whole study has been left to Beavan's team.

They are picking through the evidence, often left to guess the origins of the artifacts they find including 12 coffins lined up on a rock that are so small they could not even hold a child's body but which contain the bones of men and women.

"These coffins are unique. There is no other example in the history of Cambodia. They are relics that have never been disturbed," Beavan adds.

Among her theories is that the bones belonged to Khmer tribesmen who lived deep in the mountains far from the influence of the Angkor kingdom, which spanned Southeast Asia from the ninth to 15th centuries, but perhaps failed to reach this corner.

"They have nothing to do with the inhabitants of the Kingdom of Angkor but lived in his shadow," she said. "Who knows, maybe they were also slaves fleeing the Angkor kingdom."

This photo taken on March 24, 2013 shows coffins in a cave at Phnom Pel, Cambodia. Over a hundred 'burial jars' and a dozen coffins have for centuries held the bones—and secrets—of a mysterious people who lived alongside with the Angkor era.

The search for answers took a leap forward in 2005 when fisherman off Koh Kong province found the same Siamese jars in their nets, prompting the discovery of a 15th century wreck containing ivory, Chinese porcelain and Siamese and Angkorian jars.

The discovery provided the first scientific evidence of how Siamese jars could have been brought to the Cardamoms. Beavan believes the ship came from the Siamese empire to trade jars for ivory and precious wood.

Despite the importance of the find, conservation remains a problem.

In Koh Kong, hundreds of objects salvaged from the wreck have been left in a back room of the Provincial Court since 2007, despite Cambodia being one of the few Asian countries to have signed up the UN Convention on the preservation of underwater cultural heritage.

But the discovery has led local authorities to consider establishing a museum for the artifacts which would preserve a long-neglected part of the nation's heritage.

Nancy Beavan, an archaeologist who specialises in carbon dating, climbs up a cave at Phnom Pel on March 24, 2013. She has been painstakingly piecing together clues left by the enigmatic people at 10 sites dotted across the area in southwestern Cambodia.

They hope it could become a valuable tourist attraction and spur proposals to protect the region.

In 2012, the province recorded 100,000 local and foreign tourists, drawn to the beauty of the Cardamom Mountains, home to stunning waterfalls and one of the region's most biodiverse forests.

For all its natural bounty, the Cardamom region has seen some species gradually disappear as its precious wood forests fall prey to loggers and hunters plundering its rare species.

For two years, UNESCO has been building a case to list the mountain range as a key "biosphere reserve". The ship wreck, the sacred jars and the coffins add a cultural dimension that could boost the case for listing the area.

"To do nothing would be a crime," according to Anne Lemaistre, the director of UNESCO in Cambodia.

Time may be running out with many industrial projects, some Chinese-linked, tearing through the heart of the forest and compounding the damage to the ecosystem caused by hunters and loggers.

"The scale of development in the Cardamom scares us a little," added Lemaistre.