Philistines Brought Their Pigs With Them

Genetic analysis of 3,000-year-old pig remains in Israel shows that they came from Greece, probably brought by the Sea Peoples to Canaan

The Sea Peoples who came to the southern Levantine coast from the Aegean and elsewhere  3,200 years ago sailed with pigs on board, says a new study.
The conclusion is based on genetic analysis of pig bones found both there and in Israel. A parallel genetic study of cows showed no such translocation of cattle during that time.
It isn't that domestic pigs and wild boars didn't exist in the Levant at the time. They did, says the study, published in Nature.

Mandible of ancient pig, about 3,000 years old: Genetic analysis showed it to be a crossbreed - Joseph Maran
But swine are a convenient form of livestock for shipment by sea. Relative to cows and sheep, pigs are small. They're omnivorous, which means they'll happily eat anything, and gain weight quickly, too.
In other words, they're low maintenance, Dr. Meirav Meiri of Tel Aviv University told Haaretz. Pigs also reproduce rapidly, making it easier to establish herds quickly.
The swine were, in short, the ideal animal for a people not constrained by Jewish dietary law and migrating by slow boat.
It seems that as the great civilizations around the Mediterranean basin dramatically collapsed around 1200 B.C.E., and the Sea Peoples filled the void and settled along the Canaanite coast – they brought their pigs with them.
In fact, it seems pigs were sailing around in both directions during the 2nd millennium BCE: from the Aegean to the Near East (the fertile crescent) and from the Near East to the Aegean, based on genetic analysis of bones from the time found in Greece and Israel. Cows were not.

Cattle and general agricultural basket reached Mesopotamia in Neolithic; only pigs traveled across the sea with the Sea Peoples 3000 years ago, though.
Pigs on the main
Until some decades ago, scientists had thought that a package of domestic plants and domestic animals brought from the Near East to Europe by Anatolian farmers in the early Neolithic period, around 7,500 years ago, stayed virtually unchanged throughout antiquity.
Not so, at least in the case of the pigs. Earlier research found that Near Eastern pigs reached central Europe early in the Neolithic era, around 7,500 years ago, and mixed with indigenous wild boars, creating crossbreeds.
The present study analyzed the DNA of pig specimens from Greece and Israel, dating from 5,500 to 2,900 years ago. Fifteen of the Grecian swine turned out to be those crossbreeds of central European and Near Eastern pigs, says Prof. Joseph Maran. 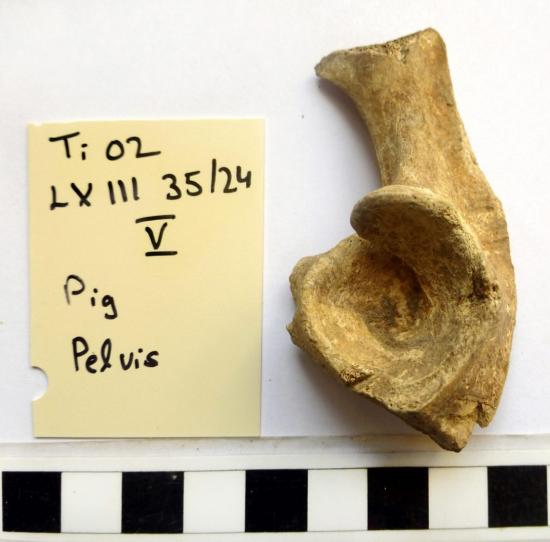 Pig's pelvis bone. Genetic analysis shows the pigs in ancient Israel and Greece were the same cross-breed 3,000 years ago. Joseph Maran
So was the Israeli pig. By the Iron Age, evidently, the crossbreed had spread backwards to the Balkans and the East Mediterranean, then emerged in the Near East.
Whether the animals were brought to the Levant for trade, or by immigrants, is anybody’s guess.
“Perhaps these pigs had certain properties that were cherished by people, such as more meat, or were tastier,” postulates Maran, director of the excavations in Tirnys, Greece.
He points out that unlike wild animals, domestic animals do not move by themselves. If a pig with Near Eastern traits was discovered in Germany, it had to have been brought there deliberately.
“In the Early Iron Age, we see the numerous emergence of the European pig signature in the southern Levant, where it did not originally exist. Nowadays, the wild boars in Israel only showed the European DNA signature. The Near Eastern wild boars seemed to have died out," Prof. Philipp W. Stockhammer of Ludwig-Maximilian University, Munich told Haaretz.
Their most likely origin is that the Sea Peoples, migrating to the Levant around the 12th century B.C.E., brought this European porcine breed to Canaan as they settled along the southern Levantine coastal strip.
Ergo, the pig remains analyzed in Israel dated to 200 to 250 years after the Sea Peoples first arrived in Canaan.

Pig skull - Daniel Berkowic
Archaeologists are undismayed by that slight discrepancy. The DNA database of domestic animals from the Levant in 12th century BCE is meager: no samples from Philistines sites have yielded DNA so far. Therefore, no direct correlation can be made with the Philistines, only from nearby sites from their era.
Also: “It takes time until the signal becomes dominant, and visible in other places, which could explain the gap in time,” explains Meiri.
In other words, it is plausible that the animals may have been brought to Canaan by the Philistines before 900 B.C.E

Extracting DNA from a petrus bone in the Department of Archaeogenetics' ancient DNA laboratory, Max Planck Institute for the Science of Human History. - Antje Wissgott
“We do have 12th century pig remains from Canaan, but it is very difficult to extract DNA from them," Stockhammer explains: they have a lot of samples, but just couldn't get into their genes.
Global trade, thousands of years ago
For countless millennia, the Levant has been a melting pot. In the Late Bronze Age (1450- 1150 BCE), the great Egyptian and Hittite empires ruled over vast swathes of the Levant and northeastern Africa. Mycenaean societies flourished in what is currently Greece and the shores of western Turkey, and Cyprus functioned as a regional supplier of copper.
This was a period of early globalization, characterized by complex trading. Precious goods travelled from the farthest northern reaches of Scandinavia to Mesopotamia and Egypt during the Bronze Age. Scandinavian amber has been found in the Levant, Mesopotamian glass rods have been found in Scandinavia, as have copper ingots from Cyprus, ceramic vessels from Mycenae and Cyprus, and resin from the Levant.
But the prosperity fizzled around 1,200 B.C.E., when the civilizations around the Mediterranean Sea collapsed, and the so-called Sea Peoples, a motley group of unaffiliated peoples including the Philistines,  moved into the void.
Wanting to see if other domestic animals joined the porcine migration, the researchers also extracted and sequenced DNA from twenty-five ancient cattle specimens: ten from Megiddo and Azekah in Israel, and 15 from Asine and Tiryns in Greece. They proved to be unrelated.
Domestic cattle had originally reached Greece and the Aegean from Mesopotamia as part of the Neolithic emergence some 7,500 years ago. And there they seem to have stayed: the genetic data does not indicate movement of cattle between the Aegean and southern Levant during the 2nd millennium B.C.E. (no shared haplotypes were discovered in samples from the Bronze and Iron Ages).
It's harder to ship cattle overseas by ship. They require more space and special food than pigs do, which could explain the absence of cattle of Greek origin in Canaan.
PART.2