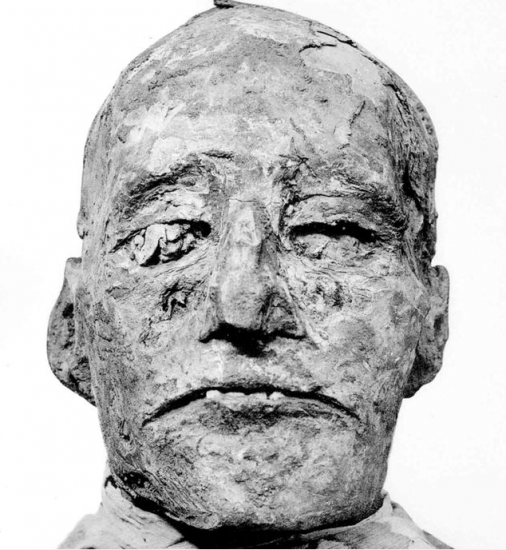 The New Kingdom Pharaoh Ramesses III was assassinated by multiple assailants — and given postmortem cosmetic surgery to improve his mummy's appearance.

Those are some of the new tidbits on ancient Egyptian royalty detailed in a new book by Egyptologist Zahi Hawass and Cairo University radiologist Sahar Saleem, "Scanning the Pharaohs: CT Imaging of the New Kingdom Royal Mummies" (American University in Cairo Press, 2016).

Hawass and Saleem studied royal mummies from the 18th to 20th dynasties of Egypt, spanning from about 1543 B.C. to 1064 B.C. Rulers during this period included famous names like Hatshepsut, Thutmose III, Tutankhamun, Seti I and the murdered Ramesses III. Previously, Hawass and colleagues had reported that Ramesses III's throat was slit, likely killing him instantly. Now, Saleem, one of the authors of that study, has found that the pharaoh's toe was hacked off, likely with an ax, suggesting he was set upon by multiple assailants with different weapons.

"The site of foot injury is anatomically far from the neck-cut wound; also the shape of the fractured toe bones indicate that it was induced by a different weapon than that used to induce the neck cut," Saleem wrote in an email to Live Science. "So there must have been an assailant with an ax/sword attacking the king from the front, and another one with a knife or a dagger attacking the king from his back, both attacking at the same time."

Ancient papyrus documents refer to a plot to assassinate Ramesses III, who ruled Egypt from 1186 B.C. to 1155 B.C. But until researchers studied the pharaoh's mummy with computed tomography (CT) scanning, they didn't have any evidence that the plot had succeeded. Then, in 2012, researchers reported the discovery that Ramesses III's throat had been cut with a sharp knife, severing his trachea and esophagus. He would have died immediately, the team wrote in The BMJ.

Court documents outline the tale of a harem conspiracy to take Ramesses III's life, hatched by one of his wives, Tiye. Her son Pentawere was in line for the throne after his half-brother, Ramesses IV (who was named Amun-her-khepeshef before assuming the throne). Tiye and other members of the royal household, including servants and administrators, meant to kill Ramesses III and then oust Ramesses IV to install Pentawere as ruler.

They seem to have succeeded in killing Ramesses III, but were brought to trial for that murder under the rule of Ramesses IV. Tiye, Pentawere and their conspirators were convicted and executed. A mummy thought to be Pentawere's has been studied, and Egyptologists believe he died of suffocation or strangulation. Ancient documents show that Pentawere took his own life after his conviction.

The new book adds detail to this lurid tale, suggesting that Ramesses III's attackers outnumbered him. Part of his big toe had been hacked off and had not healed, meaning the injury happened around the time of death, Saleem said. Embalmers had fashioned a sort of postmortem prosthesis out of linen to replace it when they mummified him.

In fact, the embalmers may have gone the extra mile to try to hide the toe injury. In the late 1800s, an authority at the Egyptian Museum in Cairo tried to unwrap Ramesses III's mummy, but was unable to penetrate the thick layers of resin that covered the bandages around the feet.

"This hid the big secret beneath the wrappings," Saleem said. "It seems to me that this was the intention of the ancient Egyptian embalmers, to deliberately pour large amounts of resin to glue the layers of linen wrappings to the body and feet."

Ramesses III's mummy also underwent the ancient Egyptian version of cosmetic surgery, Saleem and Hawass reported. Packing materials were placed under his skin to "plump out" the corpse and make him look more attractive for his journey to the afterlife. The boy-king Tutankhamun, famous for his lavish burial goods, also got this treatment. Both King Tut's face and limbs were beautified with subcutaneous fillers.

CT scanning has enabled researchers to look at mummies in more detail than ever before, without damaging the fragile wrappings. A 2014 CT study by Saleem and her colleagues found that three pharaohs thought to have a painful back disorder based on X-rays actually had a mild, age-related condition. CT scans have revealed mummy tooth cavities,mummy hairstyles and even errors by ancient embalmers. 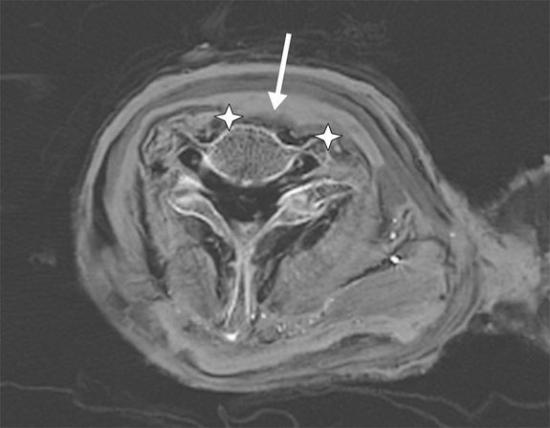 "The large and deep cut wound in his neck must have been caused by a sharp knife or other blade," the team wrote in a paper on their findings, published in the British Medical Journal on Monday (Dec. 17, 2012). Shown here, a CT scan of his neck, showing a foreign object (arrow), wound margins (stars), and skin above and below the wound (triangles).
They added that the cut, which severed his trachea, esophagus and large blood vessels, would have killed him instantly.

In Photos: The Mummy of King Ramesses III