A team of Polish archaeologists diving in a possibly sacred lake in northern Guatemala has recovered hundreds of Mayan artifacts, including ceremonial bowls and obsidian blades that may have been used in ancient animal sacrifices.

Scientists in Guatemala are examining the artifacts to learn more about the material culture of the Mayan people at different times. Researchers also want to learn how the objects may relate to Mayan religious practices.

The researchers recovered more than 800 artifacts from Lake Petén Itzá, which once surrounded the ancient Mayan city of Nojpetén, according to the team leader, Magdalena Krzemień, an archaeologist at Jagiellonian University in Poland.

The island that was once the site of the ancient Mayan city, linked by a causeway to the shore, is now the site of the modern town of Flores in Guatemala's northernmost province of Petén — a landlocked region famous for its rugged mountains and jungles. 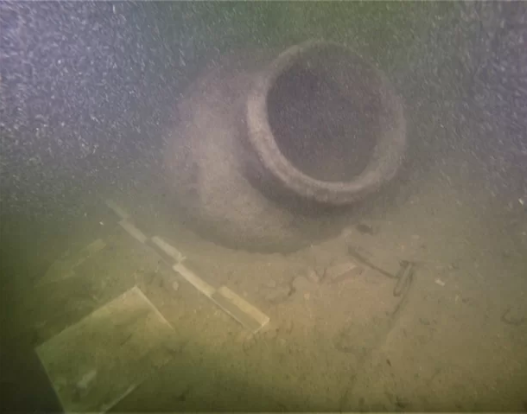 Krzemień said the largest objects found in the lake included three ceramic bowls, one inside the other, and an obsidian knife blade. This was similar to those used in ancient rituals, suggesting it could have been used for animal sacrifices, she said.

This obsidian knife blade found in Lake Petén Itzá could have been used for sacrifices, the researchers say. Credit: Mateusz Popek

Small animal bones were found inside some of the bowls, which may indicate that the vessels were used for sacrifices, Krzemień said. However, it's also possible that some small animals entered and died there later, she said.

"Water had very special and symbolic meaning in ancient Mayans beliefs," Krzemień said. "It was thought to be the medium [or] door to the underground world, [the] world of death," where the gods lived, she said.

As a result of these beliefs, the ancient Mayans sacrificed animals and sometimes humans to their gods in lakes and in flooded limestone sinkholes known as cenotes, which are common in the region.

Krzemień said that the latest expedition did not establish that the whole of Lake Petén Itzá was a holy place, but some of the ritual objects they found in place underwater showed that at least part of the lake was considered "sacred" by the people who lived there.

The ancient city of Nojpetén was a center of Mayan civilization in pre-Columbian Mesoamerica — a civilization that extended across modern southeast Mexico, Guatemala, Belize, and parts of Honduras and El Salvador. Among the most famous Mayan archaeological sites is the ancient city of Chichen Itza, in the Yucatán Peninsula of modern Mexico.

The Mayans made advances — including an intricate astronomical calendar and the culture's distinctive pictorial writing — in a civilization that lasted more than 2,000 years before the arrival of Europeans in the Americas. Mayan culture also influenced other Mesoamerican civilizations, such as the Aztec culture of central Mexico.

The six-member Polish diving team of the recent study included archaeologists from Jagiellonian University in Krakow, Nicolaus Copernicus University in Toruń and the University of Warsaw. The researchers spent a month at the lake in August and September last year, taking a total of about 90 dives at various depths.

The diving team worked with six archaeologists from Guatemala, led by Bernard Hermes from Jagiellonian University, and with two Polish divers who had sponsored the expedition, Sebastian Lambert and Iga Snopek. Krzemień, a doctoral student, is now studying Mayan archaeology during an international exchange with a Mexican university. She said the Polish and Guatemalan archaeologists plan to reunite for one month a year to further explore Lake Petén Itzá underwater. They are already planning their next expedition for August.