What tools the historian possesses to analyze the impact of new technologies, particularly in metallurgy. In terms of a timeline, this part starts in an age of copper and ends as bronze makes an appearance. But all the time it is gold that steals the show.

During the last few articles we have been exploring, in terms of the Gregorian or Christian calendar, the period from 200 BC (decline of Chavin, rise of Huallamarka, see Parts 2-5) up until the expansions of the first “empires” around 400 AD (Tiawanaku) and 600 AD (Wari) – we could call it “Peru before Empire.”

Our base camp for exploration has been Pucllana (and Maranga) but just in the last two episodes we have allowed our minds to meander outside the strict confines of the Moche-Lima-Nazca period in order to assess, over the longer term, the impact of important artistic and technological breakthroughs, notably in textiles and this week metals including gold.

The pre-Empire (i.e. pre-Wari) Lima culture encompassing Huallamarca, Pucllana, Maranga and other important central coastal complexes, together with the approximate contemporaries Moche and Nazca (the latter emerging from the magnificence of Paracas) might be called Peru’s first golden age – and we could date this period in very rounded numbers to the “first half millennium of our era” (0 to 500), give or take a few centuries.

In so doing we are in fact committing several historical heresies: (1) to assume that it is better to live in regional independence – in emerging states like that of the Moche – rather than suffer the yoke (domination) of various empires, be they Wari, Inca or Spanish; (2) that a significant turning or tipping point (for which see below) in the grand scheme of Peruvian history was the advent of the first empire (arguably that of the Tiawanaku-Wari) and not that of the Spanish; (3) that we should use the Christian calendar at all.  An alternative would be, as mentioned elsewhere, to rename BC as “BCE” – before the contemporary era, and then to rebase that era around the time of the first cities, say 5,000 years ago; and (4) we have ignored parts of the Andes, the eastern tropical rain forest area and the ceja de selva or cloud forest in between. However, in history heresies sometimes turn out to be quite “useful” as Martin Luther might well have claimed.

Open almost any history book and you will find chapters quite reasonably based around a conquest, a president, a scientific and industrial revolution. The criterion is reasonable given that a new imperial master, a new set of presidential policies or the advent of the steam engine, for example, constituted turning points in a country’s history.

But it could be argued that not only does this approach not represent what is happening on the ground, to the peasants in their fields or to workers in the factories but also that turning points are somehow more significant than tipping points.

A tipping point may be an event from which there is no going back. For example once the Seven Year’s War was in train, the costs of it would lead both Britain and Spain to impose additional taxation on their colonies in the Americas, the reaction to which would lead inexorably to protest, revolt and criollo independence. The only question left would be when.

In the case of Peru, the tipping point might well have been earlier: in 1746 when Callao was wiped off the map and Lima devastated by an earthquake and tsunami. Historians can have fun debating these points: it wasn’t so much fun experiencing the actual events. (Yes, almost no-one was left alive after the massive tidal wave hit Callao, and the colonial response was quite inadequate, leading to widespread disillusion with state and church. The Church blamed it on the sins of the people and instituted a new confraternity cult El Señor de los Milagros in an effort to restore faith.)

There can also be a difference in interpretation according to whether the historian sees the historical process evolving continuously or, conversely, responding dramatically to particular events or changes in technology.

In this series published in the Peruvian Times, this part time-wise is on the verge of the age of bronze, in which the late Nazca or early Wari people trading copper from Tarapacá and tin from Bolivia (Chayanta and Yamparaés, Chuquisaca) had succeeded in alloying the one mineral with the other, thus toughening up the copper and producing tools and weapons superior in performance.

Was this a sudden eureka-moment in Peruvian history or something that came in over a period of years? Should the Wari be seen as the “men of bronze”: the rapacious conquerors of the Andes, or as benefactors disseminating a new technology which in Europe had been available some centuries earlier. (The rate at which new technologies are disseminated is known today as the learning curve, as the logistic distribution or function by mathematicians, and as the Jorgensen-Grilliges effect by economists).

Art and technology coincide in design

It is, of course, inductive inference (almost guesswork) to say this, but wander through a northern coastal township in Peru – not today but during say the fourth century of our era – and you would have expected to find the byways lined with the dwellings of craftsmen hammering away at precious metals, if they were not producing outstanding ceramics or textiles. The people of this area we call today Moche or Mochica, and they were among the first to use copper.

They also lived dangerously, using arsenic to harden the metal. They dramatically improved the quality of their output. Many works were cast using the lost-wax technique. In gold and silver, the metal was hammered into sheets and then worked on to produce the extraordinary masterpieces of what we were beginning to argue above was Peru’s first “golden era.”

We will never know the name (never say never!) of the master craftsman / technologist / designer who produced the “Moche Sea God Headdress AD 700” shown here. It is sublime in its perfection yet grotesque in its menace. 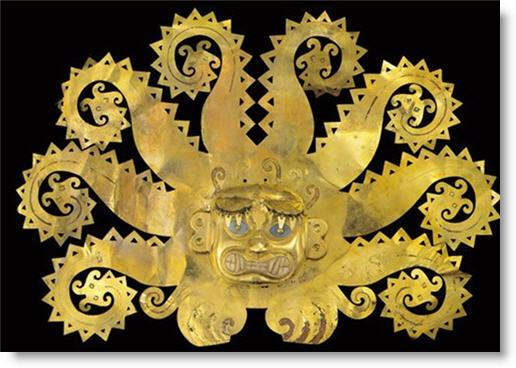 Later in this history series we will meet the concept of the “resource curse”. Too little petroleum and you may be poor. Too much and everyone wants to move in on your territory, desecrate the landscape and extract oil at below market prices: Nigeria, Iraq, Iran and so on. Peru’s own “1532” resource curse was attributable to relatively abundant gold – its fame as a possible El Dorado.

The technologies of purifying, hammering and soldering gold were developed quite early, resulting in exquisite pieces. In the sea god headdress we meet again with the fanged-being (Part 2). Perhaps this “being” was a warning to latter-day resource exploiters! The Spanish came for gold but found mainly silver (in Potosi).

The dark side of this golden era

“It was not a period (centuries one to seven) when there was a unifying horizon (empire), but the Moche together with the central coastal Lima culture and the more southerly Nasca covered most of the ‘desert area’ of what is now Peru. In the Moche valleys an extensive network of irrigation canals already existed and the land produced maize, beans, yucca, potatoes, camote, peanuts, squash, chili peppers. Fishing nets were made from cotton and gourds and the sea provided the mainstay of the diet – including sea-lions – supplemented by duck, guinea pigs and wild deer. The semblance of state administration enabled the complex distribution of precious irrigation water. All seemed set fair for a remarkable lift-off in conditions for humanity yet the now extensive collections of artifacts –mainly ceramic and mainly from grave-sites– portrayed, almost obsessively, death, sacrifice and non-reproductive sex. . . . .  Beautiful fine-line drawings of regrettably un-beautiful scenes (prisoner sacrifice etc) . . . .”

Before we get too depressed about the end of the Moche and Peru’s first golden era, let’s have a good look at the Lambeyeque mask illustrated below.

This funerary mask comes from the north coastal region of Peru, although its current home is the Metropolitan Museum in New York. 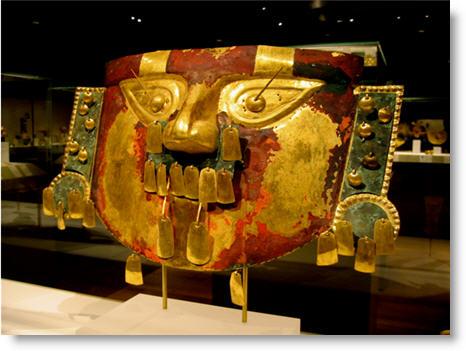 In the words of the Metropolitan, “A powerful dynasty of northern Peruvian religious leaders grew wealthy and proud between the ninth and the eleventh centuries, ostentatiously amassing riches in gold. Builders of the great funerary complexes at Batan Grande adjacent to the Lambayeque Valley, the lords of Lambayeque were compulsive hoarders of gold objects that bore the image of what may have been their legendary dynastic founder. At death, the lords were buried with their golden treasures.”

This may appear to be an equivalent first millennium practice comparable to a billionaire bequeathing his earthly fortune to a cats-home rather than let his expectant relatives in on the fortune. We know, of course, that before the Spanish arrived people valued gold differently. 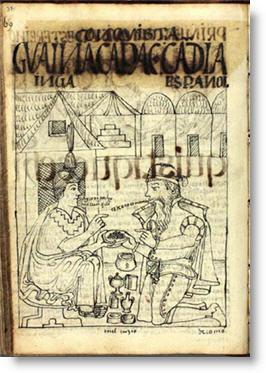 Of the 1189 pages that constitute the now-classic document by Guaman Poma, “Nueva corónica y buen gobierno” written in 1615, over 140 pages appear to have a reference to gold – oro (Spanish) or quri (Quechua).

This text has been often quoted in reference to the Spanish lust for gold, which compared to the Inca puzzlement over the importance given to it.