The discovery of a mysterious copper artefact at a Neolithic tomb on Anglesey could help to answer one of  archaeology’s burning questions.

Dr George Nash, who led the excavation at Perthi Duon near Brynsiencyn, says the find could lend  weight to the idea of a British Copper Age, which is currently being  debated by archaeologists.

Perthi Duon – described by Dr  Nash as Anglesey’s “least known  Neolithic chambered tomb” – is believed to have been a portal dolmen,   a type of single-chamber tomb  mostly built in the early Neolithic  period, and dates to around 3,500BC  or earlier.

Perthi Duon near Brynsiencyn, site of an excavation by the Welsh Rock Art Organisation.

The site was examined as early as  1723, when antiquarian Henry Rowlands visited and drew the tomb,  which then stood upright.

Dr Nash, of Bristol University, said  the monument was in a “ruinous”  state by the early years of the nineteenth century and had been incorporated into a boundary hedge.

Among them was the “curious”  copper artefact, which could be a  piece of jewellery worn thousands  of years ago. 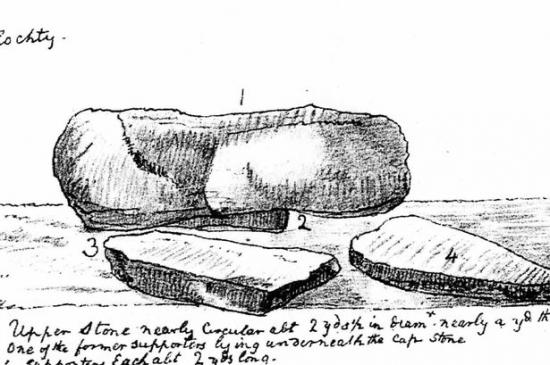 Antiquarian plan of Perthi Duon near Brynsiencyn, dated 1802 and drawn by the Reverend John Skinner.

The Copper Age followed the Neolithic Era and is considered a part of  the Bronze Age. The period is  defined as a phase of the Bronze Age  in which metallurgists had not yet  discovered that bronze could be  made by adding tin to copper.

While a Copper Age has long been  recognised in Europe, the question  of whether Britain experienced such  a period is still debated by archaeologists.

Dr Nash said: “The big question in  archaeology at the moment is  whether there was a Copper Age in  Britain.

“Did copper come to Britain before bronze?

“This discovery helps to suggest  that we did have a Copper Age.”

The copper artefact will be subject  to scientific testing in a bid to learn  more about its origins.

Ploughing around the monument  during the latter part of the 20th  century caused “a lot of disturbance”  to the archaeological remains, said  Dr Nash.

However, other finds made at the  site included areas of compacted  stone which would once have  formed a kidney-shaped mound  around the chamber, and a rare circular stone socket which would have  supported a kerbstone used to delineate the shape of the monument.  Shards of pottery were also found.

Dr Nash said: “These discoveries  clearly show this monument to be a  portal dolmen, one of the earliest  Neolithic monument types in  Wales.

“More importantly, the architecture of Perthi Duon appears to be a  blueprint for other portal dolmen  monuments within what is termed  the Irish Sea Province. From this  excavation, we now have a better  understanding of the burial and ritual practices that went on at this site  some 5,500 years ago.”

In Neolithic times, the dead would  have been deposited within the  chamber as a cremation or, in later  years, as disarticulated remains.