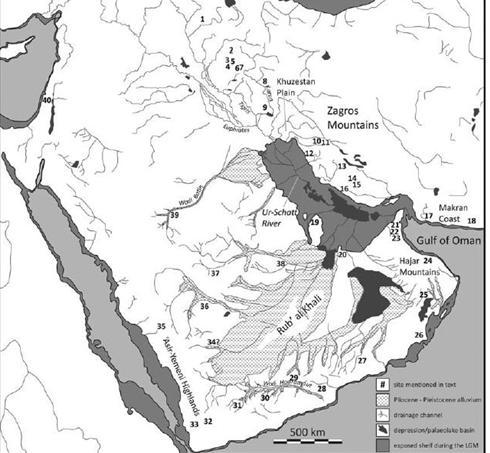 In the upcoming Current Anthropology journal study, Jeffrey Rose of the United Kingdom's University of Birmingham, points to stone tools from 40 archeological sites throughout the Middle East to suggest that modern humans left Africa earlier than many model suggest (typically around 60,000 years ago), and populated Arabian coastal areas now underwater.

"The emerging picture of prehistoric Arabia suggests that early modern humans were able to survive periodic hyperarid oscillations by contracting into environmental refugia around the coastal margins of the peninsula," begins the study. The end of an Ice Age flooded today's Persian Gulf around 8,000 years ago, Rose notes, as sea levels rose. "There is a noticeable spike in settlement activity around the shoreline of the Gulf between 8,500 and 6,000 years ago," Rose says.

Archeologist Geoffrey Bailey of the United Kingdom's University of York, says the study's suggestion that Arabian continental shelves served as good environments for human during Ice Ages, "and served as a source of population expansion in the early Holocene (last 10,000 years), is an attractive one."

However, Robert Carter of the UK's Oxford Brookes University, questions the links that Rose sees between ancient stone age tools and the later Sumerian civilization, in a commentary accompanying the report.

"Unless one completely dismisses the notion that lithic technology is passed down the generations, there are problems with assigning both the populations of southern Mesopotamia and eastern Arabia to the same demographic origin in the Gulf basin. The leptolithic (blade-based) industry of early southern Mesopotamia has little in common with the Arabian bifacial tradition(s) that prevailed in the Arabian Peninsula between 8 and 6 (thousand years ago)," Carter writes.

Rose alludes to suggestions that the Biblical "Garden of Eden" and Noah's Ark stories may have a basis in the pre-flood Persian Gulf, to conclude his study. "Albeit epiphenomenal, it is interesting to note that the oldest known version of the ubiquitous Near Eastern flood myth, the "Eridu genesis", was written by the inhabitants of this region. The link between flood mythology and marine incursion into the Arabo-Persian Gulf basin has already been thoroughly explored by a number of authors and does not require any further elucidation"