More than 20,000 conventional and high-quality digital images, more than 7,000 low-resolution PTM sets, more than 3,200 editions of Elamite texts, and 100 editions of Aramaic texts, drawings, and analytical information on more than 650 new seals and a catalog of about 1,100 previously known seals have been entered in OCHRE in preparation for public display. As of mid-2010, about 1,400 Fortification tablets are publicly available on OCHRE, including 1,250 Elamite tablets presented with transliterations, many with translations, and all with click-through glossary and morphological parsing, conventional photographs (many of them tagged and linked to transliterations), seal analysis, and other options; 40 Aramaic tablets, presented with transliterations, translations, seal information, click-through glossary and parse, and high-quality images, including screen-resolution PTM images that allow the viewer to control the lighting on screen; and 110 uninscribed, sealed tablets with cataloging information, some collated drawings, and high-quality images, including live screen-resolution PTM imagery. 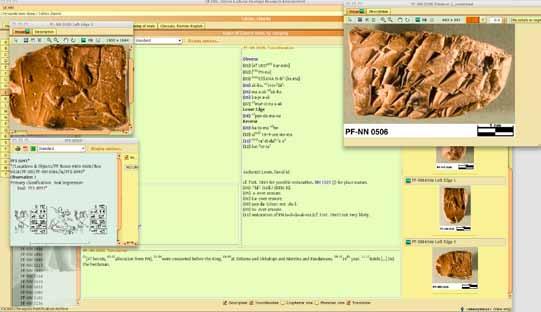 The West Semitic Research Project (WSRP) team at the University of Southern California presents images of Persepolis Fortification tablets via their online application InscriptiFact. Publicly available there as of mid-2010 are about 15,000 images of about 525 Persepolis Fortification tablets, including 400 Aramaic and 100 uninscribed tablets. In the spring of 2010, InscriptiFact released a new version that incorporates a robust online viewer for high-resolution PTM imagery. This allows users to manipulate apparent lighting (direction, intensity, and focus of one light or two) and apparent surface reflectivity and to compare PTM views with one another and with high-resolution static images. The viewer and the PTM files can also be downloaded for local use. 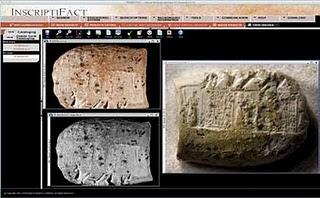 Figure 8. Antiquity at Persepolis: three views of the seal impression and Aramaic epigraph on reverse
of an Elamite Fortification tablet (PF 2026), displayed in Inscriptifact. Left: static views with polarized light and infrared filter; right, high-resolution PTM image. The Old Babylonian seal was more than 1,000 years old when it made this impression 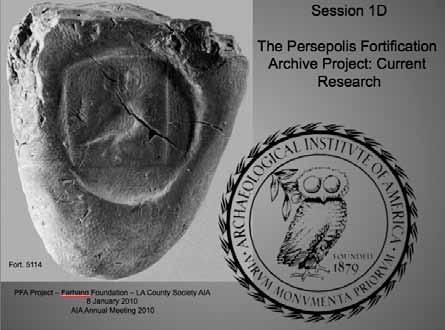 Figure 9. Athenian owl in Persepolis and California; title slide of PFA Project panel at 2010 meeting of the Archaeological Institute of America: an Athenian tetradrachm impressed on an uninscribed Fortification tablet, and the same image incorporated in the emblem of the AIA

For the worldwide online audience, the Persepolis Fortification Archive Project Weblog provides access to articles from scholarly and news media  about the archive, the lawsuit, and topics in Achaemenid archaeology and epigraphy: thirty-six  entries were posted in the last year. Persepolis Fortification Archive Project editor Charles Jones (Institute for the Study of the Ancient World, New York) reports that the blog has been viewed more than 18,000 times in the last year, by more than 12,000 unique visitors, more than 1,800 of  them repeat visitors. It has been viewed almost 70,000 times since it debuted in October 2006.

The University News Office released a new press release on the project's collaboration with WSRP in recording the Aramaic Fortification texts, with an accompanying video. Online journalistic accounts focus on the archive's legal situation and its broader implications for other cultural artifacts; examples are an article in the Phi Beta Kappa Society's Key Reporter by a lawyer working at Corcoran and Rowe, the firm representing Iran in the litigation, and an article in the online journal of the U.S. State Department, America.gov.

Persepolis Fortification Archive Project editorial staff (Azzoni, Dusinberre, Garrison, Henkelman, Jones, and Stolper) prepared an entry for the Encyclopaedia Iranica on "Persepolis Administrative Archives," providing an authoritative description of the Persepolis Fortification and Treasury Archives
and an extensive bibliography of current scholarship on them. Images, texts, analysis, and other current results also appear in a stream of publications by project staff and their collaborators, for example, "Seals Bearing Hieroglyphic Inscriptions from the Persepolis Fortification Archive" by Mark Garrison and Oriental Institute Egyptologist Robert Ritner, and "The First Achaemenid Administrative Document Discovered at Persepolis" by Charles E. Jones and Seunghee Yie, both in ARTA: Achaemenid Research on Texts and Archaeology; "Archers at Persepolis," by Mark Garrison, in The World of Achaemenid Persia, edited by J. Curtis and St. John Simpson (London, 2010); and "New Observations on 'Greeks' in the Achaemenid Empire," by Wouter Henkelman and Robert Rollinger, and "Ethnic Identity and Ethnic Labelling at Persepolis," by Wouter Henkelman and me, both in Organisation des pouvoirs et contacts culturels dans les pays de l'empire ach�m�nide, edited
by P. Briant and M. Chauveau (Paris, 2009).

In last year's Annual Report, I mentioned that I was particularly pleased to have found a  document of a new type, an example of the surprises that the Persepolis Fortification Archive still  has to offer. Now I can report with even more delight that we have found four other examples of the same type. What began as an extraordinary sidelight has become a repeating feature of the Persepolis Fortification Archive's structure and function. This is a well-known phenomenon in work on ancient Near Eastern texts and objects: finding one clear example of something newly understood brings other examples out of the shadows. It is a reminder that the Persepolis Fortification Archive Project is not only producing emergency records of basic information; it is also making strides in our ability to interpret the information.