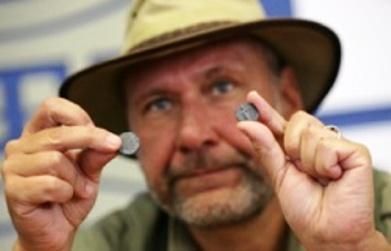 Prof. Nikolay Ovcharov shows the two seals of the Archbishop of Archidos that his team found at Perperikon. Photo by BGNES

Ovcharov has been excavating the Ancient Thracian rock city of Perperikon in the Rhodope Mountains for the past few years, and his finds have increasingly proven that Perperikon (also known as Hyperperakion) used to be a crucial urban center during the Middle Ages as well in the Byzantine Empire and the First and Second Bulgarian Empire, and not just in the Antiquity period.

The archaeologist presented Monday his latest find at Perperikon - two lead seals that belonged to Constantine, Archbishop of Archidos.

According to the Bulgarian archaeologists from Ovcharov's team, the newly found seals prove that a previously unknown Christian archbishopric – the Archidos Archbishopric – existed in the 10th-12th century in the Rhodope Mountains region, today's Southern Bulgaria, and was headquartered in Perperikon (Hyperperakion).

The name Archidos is Greek. When translated in Bulgarian it means "Ohrid". However, this toponym does not refer to the town of Ohrid in today's Republic of Macedonia (FYROM) but to the Rhodope Mountain as Archidos was the name the Byzantines used for the Eastern Rhodopes.

Ovcharov says there is evidence to suggest that from the 4th to the 14th century Perperikon was a powerful Christian center with a number of bishop's basilicas and seals, most of them dating to the 10th-12th century AD.

Over the 2011, Ovcharov's team has been focusing on the eastern part of Perperikon and its acropolis.

The archaeologist says the complete restoration and conservation of Perperikon's acropolis should be completed in 3 years, while BGN 4 M have already been secured for lighting and infrastructure of the top archaeological site. A new road connecting the village of Chernoochene near Kardzhali with Perperikon will be opened next week.

The archaeologists are also continuing to uncover the fortress walls of Perperikon, some of which are preserved of up to 3 meters in height.