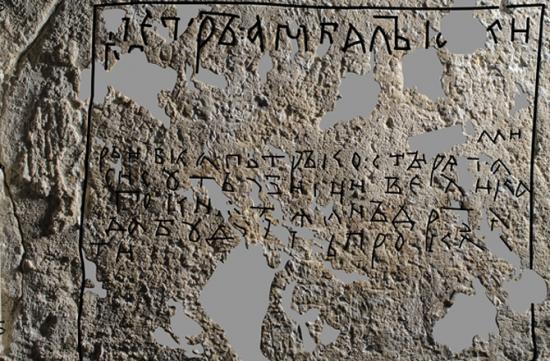 Detail of the left column of an inscription found in a Russian cathedral that names men who murdered a prince.

A long list with names of Medieval killers has been uncovered by restorers working in a Russian church, shedding new light on the murder of Andrey Bogolyubsky, one of the most powerful princes of the time.

Found on the east wall of the Cathedral of the Transfiguration of the Savior in Pereslavl-Zalessky, some 60 miles from Moscow, the inscription names 20 conspirators and briefly describes what happened on the night of June 29, 1174, when Prince Bogolyubsky was stabbed to death in his bedchamber.

“We suppose the inscription was some sort of official announcement about the murder of Prince Andrey and the condemnation of the murderers,” Alexey Gippius, professor at the National Research University Higher School of Economics and correspondent member of the Russian Academy of Sciences, told Discovery News.

“The number of the names confirms information given by the chronicles, where however only three names are mentioned,” he added.

Andrey I Yuryevich, commonly known as Andrey Bogolyubsky (“Andrew the God-Loving”), was a grandson of Vladimir Monomakh, the Grand Prince of Kiev from 1113 to 1125.

As the prince of Rostov-Suzdal and grand prince of Vladimir, he strengthened the importance of the northeastern Russian lands which he tried to unite under his authority.

He moved the political hub from Kiev to the city-state of Vladimir, making it a powerful center of religious and civil life. Seeing their power strongly reduced, the boyars, or upper nobility, plotted against the autocratic prince.

Twenty conspirators burst into Andrey’s chamber and killed him.

“The murder of the prince is one of the most dramatic and mysterious events of the second half of the 12th century,” Nikolai Makarov, director of the Institute of Archaeology of the Russian Academy of Sciences, said in a statement.

He noted the assassination was a consequence of conflicts among the political elite of the Vladimir-Suzdal land, turned by Andrey into one of the dominant political centers of Russia.

“However, the details of these conflicts, which are often interpreted as a clash of princely power and nobility, are unknown to us,” Makarov said.

Located in the middle of the southern apse of the cathedral, the inscription consists of two columns and is crowned by a cross.

The right column reads: “On the month of June 29 Prince Andrey had been killed by his servants. Memory eternal to him and eternal torture to them [lost text].”

The left column contains a list of Bogolyubsky’s killers, which include the already known names of “Petr Fralovich, Ambal, Yakim” and other so far unknown murderers including “Ivka, Petrko, Styryata.”

“These are murderers of Great Prince Andrey. Let them be cursed [lost text],” the inscription concludes.

The researchers can’t tell when exactly after the murder of Andrey Bogolyubsky the inscription was made.

The text could have been sent by the Vladimir authorities to all the main cities of the northeastern Russian lands in order to be inscribed on the walls of churches.

“Now graffiti is regarded as something undesirable and destructive, but in Middle Age graffiti on the walls of houses and churches could act as an important channel of communication between officials and the people,” Gippius said.