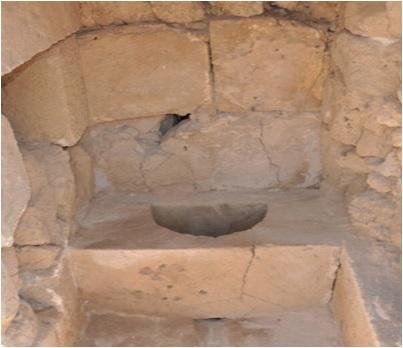 Intestinal parasites have been found lurking in ancient poop in the toilet of a medieval castle in western Cyprus, scientists report.

The findings paint a less than pretty picture of the health and hygiene of crusaders stationed on the Mediterranean island 800 years ago. Poor sanitation likely meant that food and water supplies were contaminated by fecal material, allowing parasitic infections to spread, the study suggests.

Researchers from the University of Cambridge dug into the pit of dried-out waste under a latrine in the remains of Saranda Kolones (Greek for "Forty Columns") at Paphos, a city at the southwestern tip of Cyprus and a UNESCO World Heritage site.

Overlooking Paphos harbor, and next to a complex of Roman villas with remarkably intact floor mosaics, Saranda Kolones was long thought to be a temple because of the granite columns that littered its ruins. But excavations in the 1950s revealed that it was actually a short-lived concentric castle.

English King Richard the Lionheart sold the island of Cyprus to the Frankish crusader Guy de Lusignan in May 1192. Archaeologists believe the Franks built Saranda Kolones to defend Paphos harbor soon after their occupation of the island began. But in 1222, the city was rocked by a powerful earthquake thought to be at least 7.0 in magnitude. Much of the fortress was left in ruins, never to be rebuilt, but the latrines on its lower floors survived.

These toilets were carved to fit the human form, with a half moon-shaped hole in the seat leading to a sewer below. Cambridge researchers Evilena Anastasiou and Piers Mitchell, who study ancient parasites, collected samples from one of those cesspools, rehydrated the waste and strained it through a micro-sieve to catch parasite eggs, each smaller than a tenth of a millimeter.

Worms in the waste

Under a microscope, the researchers saw that the samples contained the eggs of two of the world's most common and widespread intestinal parasites: whipworms (Trichuris trichiura), which cause the infection known as trichocephalus, and giant roundworms (Ascaris lumbricoides), the largest of the nematodes found in human intestines, with adults that can grow to more than 1 foot (30 centimeters) long.

People with a light load of these worms may experience no symptoms. But when whipworms and giant roundworms heavily colonize the digestive tract, they compete with their hosts for food, siphoning off the nutrients that would normally be absorbed in the intestines. Eggs of the parasites pass through the feces and spread to other hosts by ingestion (say, when a human doesn't wash their hands and spreads the parasite to food or other objects that get consumed). That means infections are most common in places with poor hygiene and sanitation as well as areas where human waste is used as fertilizer or where people defecate in the soil.

Mitchell has estimated that during a two- or three-year crusade expedition, noblemen and clergy were just as likely to die in battle as they were to succumb to malnutrition and disease. Presumably, the risk of malnutrition would have been even worse for poor foot soldiers with fewer resources. The new study suggests that parasites likely contributed to the demise of many soldiers who died of starvation or disease.

"In these circumstances [it] is quite likely that medieval soldiers with a heavy parasite load would have been at increased risk of death from starvation during famine episodes such as long sieges or expeditions when supplies ran out," the researchers wrote. "This is because they would have had to share the limited available food with their parasites."

Studying feces is a rather unglamorous but useful way for archaeologists to reconstruct the diets, health and lifestyle of ancient people. The parasites described in this study are hardly the oldest ever found in Cyprus. A recent analysis of human waste up to 10,000 years old revealed roundworms, whipworms and tapeworms at the Neolithic Cypriot sites of Khirokitia and Shillourokambos.

The research was detailed in the International Journal of Paleopathology.