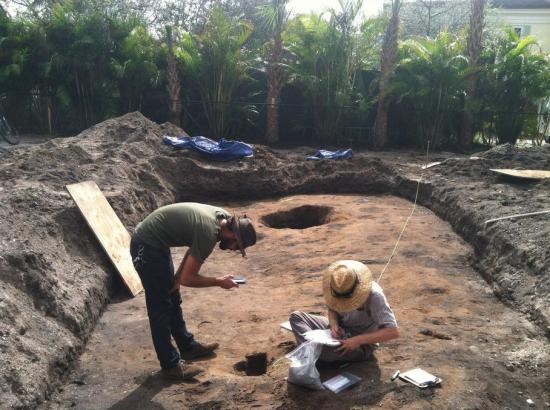 Seven residents over the past year have had to hire archaeologists to perform assessments before work could begin on their properties.

The assessments can be pricey for property owners, ranging from a few hundred to thousands, but archaeologist say they have yielded significant findings.

“Well-preserved animal bones and shell refuse occur at many of these sites allowing scientists to chart the dramatic changes in the environment that has occurred over the past 2,000 years,” said archaeologist Robert Carr, who has performed dozens of assessments in town. “Overall the town has a large number of significant sites, in part, because of its location on a barrier island.”

David Rosow thinks if the local or state governments want to require archaeological assessments someone else should pay the tab.

Rosow’s 1460 North Lake Way property, which lies on one of the largest prehistoric sites in town, was the only one to yield human remains in the past year. Archaeologists uncovered the distal end of a human femur in September during excavations for a new garage foundation.

Carr, executive director of Archaeological and Historical Conservancy, said once human remains were discovered the state ordered archaeologists to sift through the soil before it could leave the property. The state becomes involved in assessments only when human remains are discovered.

“We had something like 300 cubic yards of fill to go through,” he said. “They were going through 10 cubic yards a day at their hourly rate for days. It affected the timing on our project, it affected my wallet, and nothing came of it.”

Carr said he agreed to stop sifting if Rosow kept the soil on the property in a place where it wouldn’t be disturbed. The remains were re-interred “as close as possible to the location they were found.”

Both Rosow and his neighbor Lawrence Moens’ properties have yielded human remains and extensive artifacts over the past three years. The most significant discovery was evidence of prehistoric houses at Moens’ property, Carr said. “We are in the process of washing and cataloging the artifacts. Once the cataloging is complete a report will be issued, likely in October.”

Carr said archaeologists have uncovered human remains at five sites in Palm Beach in the past 40 years.

“Fragments of burnt animal bone indicate episodes of cooking,” Carr wrote in the report. “A single shark tooth shows evidence of shaving down of the root on both sides, presumably to facilitate hafting. It is the consultant’s opinion that this assessment documented a prehistoric midden representing habitation and subsistence activities dating to 500 to 1,000 years before present.”

Below is a list of the other archaeological assessments since January 2013 and their findings:

* 1902-1906 S. Ocean Blvd. — several small fragments from a turtle. It was not possible to determine whether the bones were associated with cultural activity or were of natural origin.

* 1200 S. Ocean Blvd. — shell midden materials such as marine shell, oyster and faunal bone. This site was previously unrecorded and its significance and extent is unknown. Other artifacts possible.

Artifacts are analyzed at Carr’s facility in Davie and then transferred to museums in Palm Beach County.