The pyramidal building known as Temple 20 at Palenque Archaeological Zone, in Chiapas, where the existence of a funerary chamber that contains the remains of a high rank character has been confirmed, is being reinforced and restored by specialists from the National Institute of Anthropology and History (INAH) with the aim of guaranteeing its structural stability and the possibility of public visit in the future. 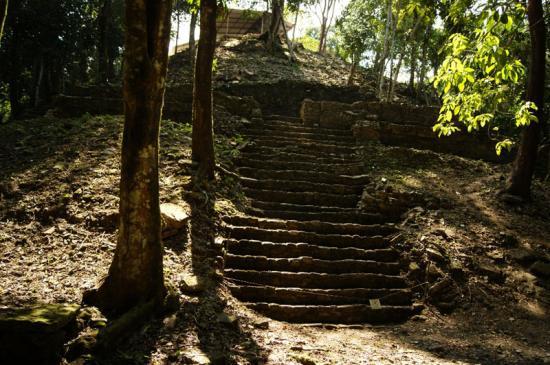 The work part of the site’s Management Plan gives continuity to exploration conducted by archaeologists Merle Greene and Alfonso Morales between 1999 and 2003. Martha Cuevas, researcher at INAH, directs to present the stabilization labors at the 1,400 years old Prehispanic construction-

According to archaeologist Cuevas, the relevance of Temple 20 lies in its dating, which goes back to the Early Classic period (430-600 AD), lapse with little evidence found at Palenque, mainly from the architectural category.
Temple 20 “illustrates an obscure moment of occupation of the ancient city: almost every construction we can admire today dates from the Late Classic period (600 to 850 AD); earlier stages of the site are scarcely known”.

Martha Cuevas explained that “unlike other Mesoamerican cities, it is not easy to detect early stages of buildings at Palenque. In the case of the main temple of Tenochtitlan, Templo Mayor, a base and a temple were built over other similar structures; in Palenque, they dismantled the upper part of the constructions and raised new buildings”. 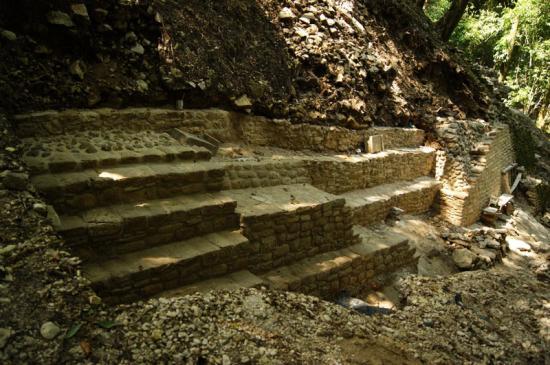 Regarding the funerary chamber inside the pyramid, the specialist from the INAH Direction for Archaeological Monuments and Zones Public Registration, declared it was identified in 1999 by caving a probing well and introducing a camcorder-

A funerary chamber with mural paintings was captured: on the floor, remains of a person and ceramics allowed determining that the inhumation dates from the Early Classic period, approximately 550 of the Common Era.
“The video recording shows flat vessels and dishes inside the tomb, as well as jade beads, some tesserae, and shell fragments that must have been part of a mask that the entombed personage carried on the belt.
“There are no sarcophagi from the Early Classic period, as the cases of the Reina Roja (Red Queen) or Pakal II; this important character was deposited on slabs directly on the floor of Temple 20. Images do not allow seeing the complete skeleton; apparently, there are just fragments, but this will be confirmed once the mortuary chamber is explored”.

The INAH Council of Archaeology determined that the pyramidal base must be stabilized before exploration to prevent filtration or collapse, safeguarding the conservation of the funerary context. Once this labor ends, investigation at the chamber will be resumed.
Archaeologist Edwin Angulo Torres, in charge of work at Temple 20, mentioned that labor focused on the exploration of the base and the consolidation of the superior temple, resulting in the identification of 2 constructive stages of the building, the first from 430-600 AD and the second from 750-900 AD.
Angulo mentioned that the temple was constructed on a rocky promontory, and Mayas leveled it with gravel and clay fillings that loosened with time, causing foundation laying problems in the northwest area of the building. 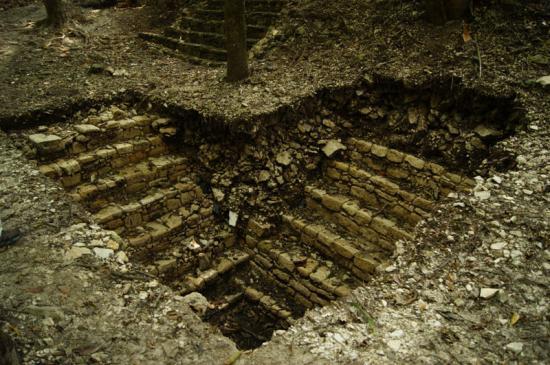 “Data obtained by using probing wells and other excavation methods allow us reconstructing hypothetically how the construction’s façade looked like, its bodies and the height of each of them, giving us the approximate appearance of the construction”.
Intervention of Temple 20 also had the objective of “giving the upper temple architectural and structural support, key for conservation of the substructure and the funerary chamber”.
After commenting that in 2011 will take place the second field season, archaeologist Edwin Angulo concluded that the project contemplates the integral consolidation of the base, adding that in 2010, the main façade consolidation was finished, except the staircase.