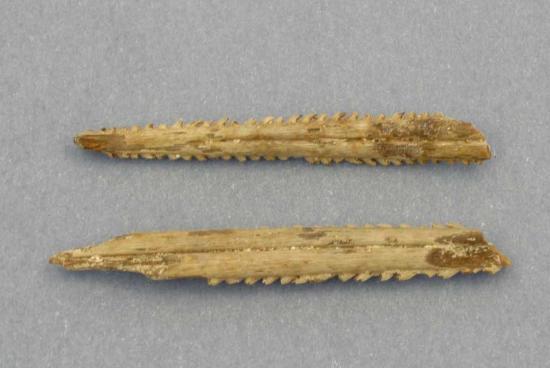 For Palenque inhabitants, marine fossils were the convincing proof of the land being covered by the sea long time ago, and parting from this fact they created their idea of the origin of the world. Photo: INAH.

Recent interdisciplinary investigations regarding 31 marine fossils found at Palenque Archaeological Zone, in Chiapas, reveal that Maya people conceived their beliefs parting from this kind of vestiges, so their idea of the underworld was associated to water.

For Palenque inhabitants, marine fossils were the convincing proof of the land being covered by the sea long time ago, and parting from this fact they created their idea of the origin of the world, declared archaeologist Martha Cuevas, responsible, with geologist Jesus Alvarado, of research conducted by the National Institute of Anthropology and History (INAH) and the National Autonomous University of Mexico (UNAM).

Ongoing for 3 years, the investigation is oriented to understand symbolism given by ancient Mayas to Prehistoric vestiges, specifically the 31 specimens found at the archaeological site

The INAH researcher mentioned that petrified rests have been found mainly at funerary contexts, standing out the fossils of different marine animals, shark teeth and stingray spines deposited as part of funerary offerings.

“During investigation conducted at the North Group temples and the structure in front of them, slabs with marine fossils were used by Mayas as tombstones or offered to deities, which is important in the study of Maya cosmogony”.

Until now, 31 fossils from different periods have been discovered, being the earliest from the Paleocene, nearly 63 million years ago. “Vestiges were used in ritual contexts during the Late Classic period (600-850 AD), when they were found by Palenque people”.

This research “looks forward to know if it was through contact with fossils more than 1,200 years ago, that these elements were incorporated to their world view.

“We believe that parting from these probable chance discoveries they began forming the idea of the creation of the world that we know thanks to iconographic representations and hieroglyphic texts left behind, as well as myths that are part of oral tradition”, commented Martha Cuevas.

She added that “according to information from Colonial myths, for Palenque people these fossils were testimonies of land being covered by the sea in ancient times; when gods ordered water to retire, their city emerged and the actual era began.

“Mayas from Palenque had the notion that the Earth was different thousand years ago, and that the world was mutable, subject of transformation”.

Confirming this would mean that they inferred that marine fossils were important because they referred to the moment of the origin of humanity and were related to death; they believed that when people died they returned to their place of origin.

“The fact of have used fossils in funerary contexts is related with the conception they had about the underworld, as the aquatic destiny they reached after dying”, added up the INAH archaeologist.

Martha Cuevas also mentioned that research includes the study of iconographic representations and hieroglyphic texts found at the site, which, in a way, are related with the fossils.

An example of this is the 14th Tableaux. It represents a scene of the mythic trip to the underworld of the Maya ruler Kan Balam II to a remote epoch, 932,000 years back.

“According to the legend, when Kan Balam II died in 702 AD, his brother and successor K’an Joy Chitam II ordered the creation of this remarkable relief. We can see in the stele a dancing Kan Balam II and his mother, also deceased, Ts’ak Ahaw.

“The bottom of the relief shows 3 levels marked with glyphs that indicate the place where the characters are found; the expressions “nab”, body of water, and “hets’an Kák nab”, calmed sea, refer to the aspect of the world during that mythic age, when everything was water and gods had not ordered land to emerge”.

“Painted on vessels we have found representations of fish species, shark teeth and stingray spines similar to those found in fossils”, she concluded.