PALENQUE (Mexique) : An unknown son of Pakal II of Palenque has been identified

An Unknown Son of Pakal II of Palenque has been Identified 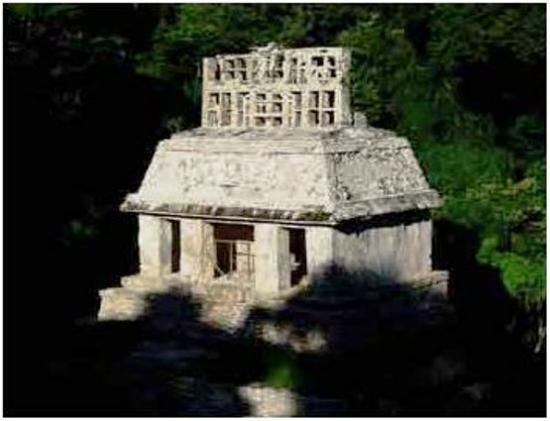 By reintegrating 2 fragments of a glyphic text an inscription that refers to a possible son of the ruler was deciphered.

Parting from the reintegration of two fragments from the Northern Tableau of the Temple of the Sun Sanctuary, in Palenque, a new lecture of the glyphic text was conducted in which the name of another son of Pakal II, unknown until now, may have been mentioned.

Both sculptural fragments were recovered in 1993 by archaeologist Arnoldo Gonzalez, from the National Institute of Anthropology and History (INAH) and were recently incorporated to the Northern Tableau at the Archaeological Site of Palenque, in the Mexican state of Chiapas.

Epigraphist Guillermo Bernal Romero has interpreted the secondary text of the tableau, integrated by the pair of fragments salvaged. In a preliminary expression of the glyphs ordered in columns, the date that corresponds to September 9th 687 is mentioned, when Palenque forces broke into the city of Po’ (Tonina) “by the work” of its ruler K’inich Kan B’ahlam, firstborn child of K’inich Janaab’ Pakal, known also as Pakal II.

According to the former director of the Palenque Site Museum, the next sentence, at the left column, is disconcerting, because the stretch “by the work of” appears again: in this case, it refers to a character identified as Wak[…]nal B’ahlam Ch’aaj II Sibik Kan, who is immediately mentioned as the son of K’inich Janaab’ Pakal and lady Tz’ak-b’u Ajaw

The epigraphist from the National Autonomous University of Mexico (UNAM) stated that in the inscriptions at Palenque no other references have been found to this character of the B’aakal Lordship, as the city was known during the Prehispanic period.

Nevertheless, “It is indisputable that he was not the firstborn child of Pakal II, because then he would have relieved his father, as K’inich Kan B’ahlam did.

“Wak[…]nal B’ahlam Ch’aaj Il Sibik Kan might have been the second child of the royal couple. It is a fact that he was born after K’inich Kan B’ahlam, who was born in May 20th 635. Ch’aaj II might have been procreated in the following 8 years”, he explained.

According Guillermo Bernal, a glyphic text points out that lady Tz’ak-b’u Ajaw gave birth to 5 children, and 3 of them were mentioned in other inscriptions: K’inich Kan B’ahlam; K’inich K’an Joy Chitam, born in November 2nd 644, and Tiwohl Chan Mat, born in March 14th 648 of the Common Era.

“Wak[…]nal B’ahlam Ch’aaj Il Sibik Kan is an enigmatic character in the history of Palenque, since there is no information about him. This register is related to his participation at the military campaign against Tonina in 687.

“The other possibility is that this character is some kind of deity that accompanied K’inich Kan B’ahlam to the war against Tonina. The structure of the glyphic text is not common: it says that “the work was done” by the main ruler, but it is not mentioned that he received help.

“In strictly epigraphic terms, this new character is directly related with the expression “son of K’inich Janaab’ Pakal and lady Tz’ak-b’u Ajaw”, meaning Wak[…]nal B’ahlam Ch’aaj Il Sibik Kan, was a human being, brother of K’inich Kan B’ahlam, but as there are no more mentions, the possibility of him being a supernatural entity exists”, concluded Bernal.