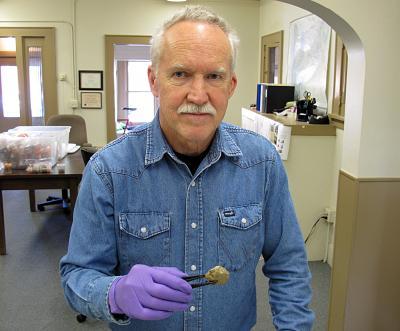 Archaeologist Dennis Jenkins of the University of Oregon's Museum of Natural and Cultural History holds a human coprolite dating to about 13,000 years ago

Archaeological work in Oregon's Paisley Caves has found evidence that Western Stemmed projectile points -- darts or thrusting spearheads -- were present at least 13,200 calendar years ago during or before the Clovis culture in western North America.

In a paper in the July 13 issue of Science, researchers from 13 institutions lay out their findings, which also include substantial new documentation, including "blind-test analysis" by independent labs, that confirms the human DNA pulled earlier from human coprolites (dried feces) and reported in Science (May 9, 2008) dates to the same time period.

The new conclusions are based on 190 radiocarbon dates of artifacts, coprolites, bones and sagebrush twigs meticulously removed from well-stratified layers of silt in the ancient caves. Absent from the Paisley Caves, said the project's lead researcher Dennis L. Jenkins of the University of Oregon's Museum of Natural and Cultural History, is diagnostic evidence of the Clovis culture such as the broad, concave-based, fluted Clovis projectile points.

The radiocarbon dating of the Western Stemmed projectiles to potentially pre-Clovis times, Jenkins said, provides new information in the decades-old debate that the two point-production technologies overlapped in time and may have developed separately. It suggests that Clovis may have arisen in the Southeastern United States and moved west, while the Western Stemmed tradition began, perhaps earlier, in the West and moved east.

One example, he said, is the discovery of Clovis points below Western Stemmed points at Hell Gap, Wyo. While this example suggests that Clovis was older in that location than Western Stemmed, the new Paisley Caves evidence indicates that Western Stemmed are at least the same age as Clovis (about 12,800-13,000 years old) in the northern Great Basin of Oregon -- about 1,000 miles west of Hell Gap. 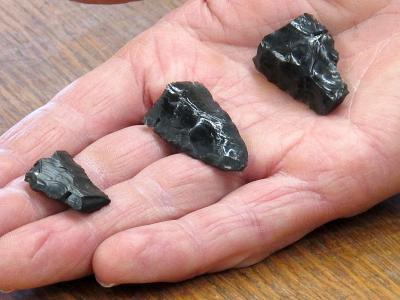 At least three other Western sites -- Cooper's Ferry in Idaho and Nevada's Smith Creek Cave and Bonneville Estates Rockshelter -- also contain only Western Stemmed points in deposits of this age.

"From our dating, it appears to be impossible to derive Western Stemmed points from a proto- Clovis tradition," Jenkins said. "It suggests that we may have here in the Western United States a tradition that is at least as old as Clovis, and quite possibly older. We seem to have two different traditions co-existing in the United States that did not blend for a period of hundreds of years."

The origin of humans in the Americas has long suggested early migration out of Siberia and eastern Asia, very possibly across a temporary land bridge between Russia and Alaska. In more recent years, Jenkins' UO colleague Jon Erlandson has been building evidence -- a lot of it emerging from the Channel Islands off California -- of a Late Pleistocene sea-going people following a "kelp highway" from Japan to Kamchatka, along the south coast of Beringia and Alaska, then southward down the Northwest Coast to California. Kelp forests are rich in seals, sea otters, fish, seabirds, and shellfish such as abalones and sea urchins.

The new paper doesn't address the routes early migrants may have taken, but the additional evidence found in the DNA of the coprolites continues to point to Siberia-east Asian origins. Again, as in 2008, the human mitochondrial DNA -- passed on maternally -- was from haplogroup A, which is common to Siberia and found, along with haplogroup B, in Native Americans today.

DNA cannot be directly dated with radiocarbon technology. Instead, researchers extracted components of the diet eaten by the early inhabitants and washed potentially contaminating carbon out of the coprolites with distilled water. The digested fibers and carbon fraction were then radiocarbon-dated separately and the results compared.

The only significant aging difference in 12 such tests involved a camelid coprolite (ice-age llama) that was dated through its contents to about 14,150 years ago, while its water-soluble extract was dated to 13,200 years ago. This sample was found below a mud lens that contained one of the Western Stemmed points and human coprolites dated to between 13,000 and 13,200 years ago.

The meticulous methodology used, Jenkins said, was done to address criticism that the 2008 findings may have been compromised by contamination, such as the leaching of later DNA from humans by water and rodent urine downward through the caves' many layers. The new evidence indicates this form of contamination is not a good explanation for the pre-Clovis human DNA.

"We continued to excavate Paisley Caves from 2009 through 2011," the authors wrote in Science. "To resolve the question of stratigraphic integrity, we acquired 121 new AMS [accelerator mass spectrometry] radiocarbon dates on samples of terrestrial plants, macrofossils from coprolites, bone collagen and water soluble extracts recovered from each of these categories. To date, a total of 190 radiocarbon dates have been produced from the Paisley Caves."

The UO's archaeological field school, operated by the Museum of Natural and Cultural History, returned to the Paisley Caves, under Jenkins' direction, in 2002 to test conclusions made by UO anthropologist Luther Cressman. Based on discoveries of artifacts he found in the caves in 1938-1940, Cressman claimed he'd found evidence of Pleistocene occupation by humans. That claim, based on technologies at the time, was not readily accepted. He died in April 1994, still claiming that he had proven his case.

The Paisley Caves are in the Summer Lake basin near Paisley, about 220 miles southeast of Eugene on the east side of the Cascade Range. The complex includes eight westward-facing caves, all wave-cut shelters, on the highest shoreline of pluvial Lake Chewaucan, which rose and fell in periods of greater precipitation during the Pleistocene, or last glacial period.

"Following the recession of lake waters, the caves began to accumulate different kinds of terrestrial sediments," said co-author Loren Davis, an archaeologist at Oregon State University in Corvallis. "The caves contain a series of deposits that were created by the combination of wind, gravity, water-borne and biological processes. Archaeological evidence suggests that humans visited the cave many times, leaving behind material traces in the form of stone tools, lithic chipping debris, organic craft items, food wastes and even coprolites. These cultural materials were entombed largely as they were left behind as sediments continued to accumulate."

The archaeological field school is a program of the UO's Museum of Natural and Cultural History, which was established in 1936 by the Oregon Legislative Assembly as the official repository for state-held anthropological collections.

"Oregon is a unique place, with a special geomorphology and rich cultural history," said Kimberly Andrews Espy, vice president for research and innovation at the UO. "The research conducted by professor Jenkins and his team helps to tell the story of early human migrations into North America and demonstrates how the UO's long-running summer archaeological field school continues to provide research and training opportunities for students and yield important scientific results 76 years after its founding."