What is the sun god doing on the floor of ancient synagogues? Doesn't that violate the second commandment ? 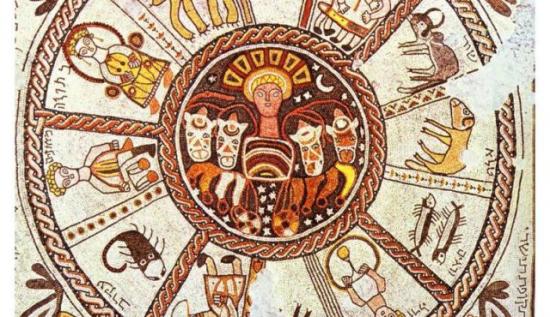 The Sun God in the middle of a zodiac wheel, Beit Alfa, Israel, dating to the 6th century CE. Photo by Haaretz aretz

“Thou shalt not make unto thee a graven image, nor any manner of likeness…” proclaimed the Voice out of the fire and smoke at Mount Sinai. Yet ancient craftsmen, working in the biblical Land of Israel almost two millennia after Moses, were apparently undeterred by the Divine injunction. Their synagogue mosaic floors, unearthed by modern archaeologists, boast human images and – yes – even pagan deities. Such as the Sun God.

The two best-preserved of the synagogue mosaics are the exquisite figures in Hammat Tiberias (4th century C.E.), overlooking the Sea of Galilee, and the child-like but charming art of Beit Alfa (6th century C.E., shown above), at the foot of Mt. Gilboa.

There can be no doubt about their identity as synagogue interiors: Each has Aramaic inscriptions, characteristic Jewish motifs like seven-branched menorahs, rams’ horns, lions, a synagogue holy ark, the lulav and etrog used on Sukkot (the Feast of Tabernacles), incense pans used in the long-gone Temple, and, at Beit Alfa, a scene of the biblical Binding of Isaac, with Hebrew captions. 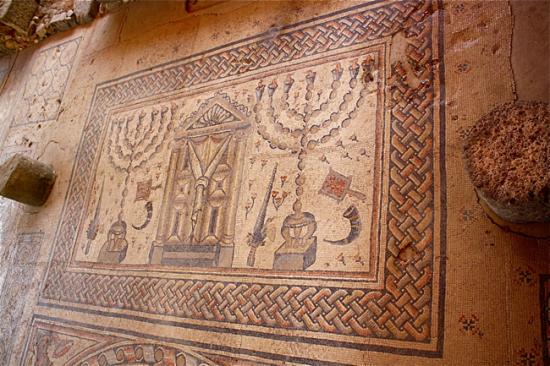 Jewish motifs on the mosaic floor of the Hammat Tiberias synagogue. Photo by: Matthew Shugart, Flickr

What is astonishing at both sites is the large centerpiece, depicting the wheel of the zodiac, a blatantly Hellenistic-Roman device. It is populated with human figures, seemingly in defiance of the Second Commandment. Four female figures, representing the four seasons of the year (often with their season’s bounty at hand), inhabit the corners of the square frame. Several of the 12 signs of the zodiac are human, with two in Hammat Tiberias – Libra and Aquarius – fully naked. 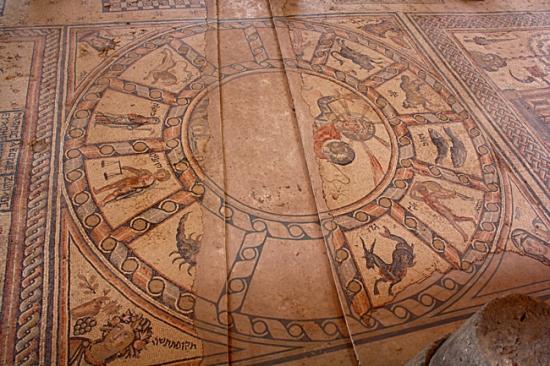 The zodiac and sun god on the floor of the Hammat Tiberias synagogue. Photo by: Matthew Shugart, Flickr

But the real surprise lies at the center of the wheel. Here, in the very heart of the synagogues, is a representation of Helios, the Greek sun god, in the form of a charioteer, whip in hand, riding his four-horse quadriga across the sky. What is the image doing here? Could particular contemporary synagogues have taken a less literal view of the biblical prohibition, understanding it (as some scholars do today) to apply only to three-dimensional idols, not to merely decorative "flat art"?

Hammat Tiberias illustrates the point. In the 4th century C.E., the nearby city of Tiberias was the seat of the Sanhedrin, the Jewish High Court, and the center for the compilation of the so-called Jerusalem Talmud. It seems unlikely that the Jewish religious establishment would have tolerated such pagan artwork on its doorstep unless it fell within the acceptable boundaries of the day.

The suggestion that the zodiac-and-Helios phenomenon might represent a regional aberration is not consistent with the wide geographical spread of known synagogue zodiacs. Three were found in the middle north of the country (Hammat Tiberias, Beit Alfa and Zippori), one near Jericho, one on Mount Carmel, one in the Hebron Hills, and another at Ein Gedi (near the Dead Sea), which lists the signs but doesn’t depict them. 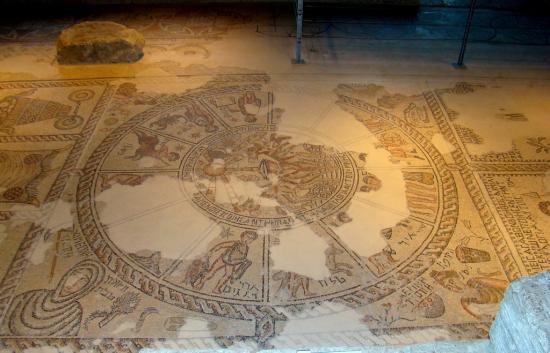 There is a view that the zodiac was used as an astrological calendar. Indeed, there are literary hints that some belief in the influence of heavenly bodies was not alien to the Jewish mind at certain periods, but it never crossed the line to becoming a tenet of faith. An obstacle to the theory is that on some zodiac synagogue floors, the months are consistent with the turn of the seasons (giving support to the calendar idea), while others are oddly unsynchronized (suggesting that the artists were casual about the cosmology since the representation was meant to be decorative and purely symbolic).

The symbolists might claim that the whole Hellenistic-Roman motif merely represents the orderly cycle of the universe: season follows season (the female figures), month follows month (the signs of the zodiac), and day follows day (Helios, personifying the life-giving sun).

Jews recognized, of course, that the universe is entirely in the hands of the Creator; but since any representation of Him was the most severe prohibition of all, they adopted and adapted a long-popular Mediterranean design to convey the idea. There was no veneration of the pagan deities or celestial bodies – after all, the congregation routinely tramped over them – and thus no violation of the second part of the Second Commandment: “…thou shalt not bow down unto them, nor serve them.” Selah. 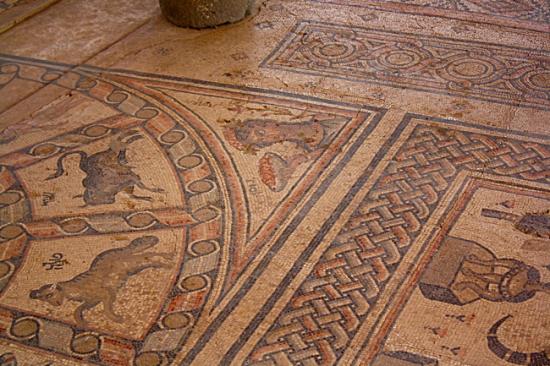 Closeup on zodiac images on the floor of the Hammat Tiberias synagogue. Photo by: Matthew Shugart, Flickr