And then there is Conan Doyle. A former doctor and fossil collector, he had the expertise to create forged skull fragments. One of his characters, in The Lost World, published in 1912, even states: "If you are clever and know your business you can fake a bone as easily as you can a photograph." He also had the opportunity. He played golf at Piltdown, after all. As to motive, his spiritual beliefs had brought him into conflict with science and he may have wanted to humiliate its practitioners. "But if that is the case," says Stringer, "why didn't he announce his triumph after so convincingly fooling the world of science? That doesn't make sense."

As for Smith Woodward and Keith, both were keen advocates of the theory that humans had big brains early in their evolution and could have procured these bits of skull – using Dawson to deposit their handiwork – because they were convinced they represented the truth. But if Dawson was just a stooge in this business, why did the uncovering of finds at Piltdown stop immediately after his death? People went on looking for years, but never found a thing after 1916.

It is a perplexing mix of suspects, which the new research hopes to unravel by studying and measuring the skull carefully and by analysing every chemical present in the stains and chemicals used in the different pieces. Do the dyes match those in Hinton's trunk? Does the canine found by Teilhard contain chemicals not found in the other pieces? Or is its staining unique? "We are going to fingerprint all the material found at Piltdown and unravel how many patterns of interference have occurred – and how many individuals were involved," says Stringer. "We might get our hoaxer or hoaxers that way."

As for Piltdown, there are few signs left around the village today to show this was once thought to be one of the most important sites in human evolutionary history. The Manor is locked and gated and the plinth that marked where the first find was uncovered is out of sight of passers-by. Even the local pub, which until last year revelled in the name of the Piltdown Man, has now changed its name to the Lamb. As Joseph Weiner, who helped reveal the hoax, once noted: "Piltdown Man has lost his place in polite society." 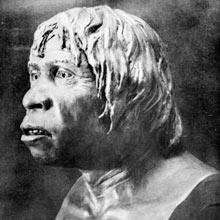 Three special features mark out Homo sapiens from the rest of the primate world. We walk upright; we make complex tools and we have big brains. And of these features, it was thought – for a long time – that big brains came first. They drove a need to free hands and arms in order to make tools – which our developing intellects subsequently invented. Hence the easy reception given to the finds at Piltdown. They accorded with the notion that human intellect has a deep-rooted evolutionary past. But we now know that this sequence is not the case. Upright stance came first, tools came later and big brains, measured in terms of modern human standards, arrived last. The Piltdown forgery was a bad guess.