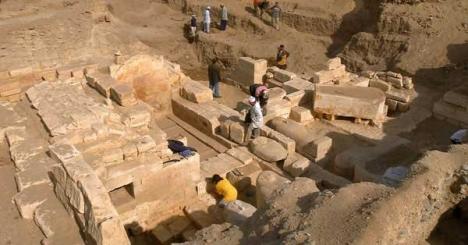 Previous digs nearby have uncovered a temple dedicated to the Egyptian god of the afterlife. Photo: Societat Catalana d’Egiptologia

Spanish Egyptologists have discovered what could be one of the oldest images of Jesus Christ, painted on the walls of a mysterious underground structure deep in an ancient Egyptian tomb.

A team of Catalan archaeologists have returned from the ancient Egyptian city of Oxyrhynchus after uncovering a mystery underground structure in buried tombs which date from the 6th and 7th centuries.

It is reportedly decorated with Coptic images — or paintings by a group who number among the earliest Christians — and may contain one of the earliest-known representations of Jesus Christ. 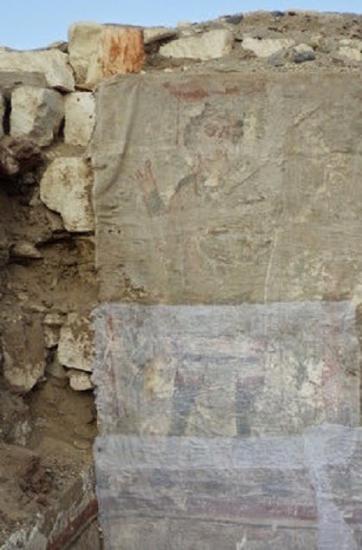 The Coptic painting, covered with a protective layer, which is a figure of a young man in the act of blessing [Credit: Societat Catalana d’Egiptologia]

The head of the expedition, Josep Padró, who has spent  over 20 years excavating sites in the area, described the discovery to La Vanguardia newspaper as "exceptional".

It has caused such as stir that even Egypt's Minister of Antiquities, Mohamed Ibrahim, has become personally involved.

He broke the news himself in a press release which described the contents of the tombs, which are believed to have belonged to a well-known writer and a family of priests.

The Egyptian ministry will take responsibility for developing the archaeological site, which was discovered by a joint team from the Catalan Egyptology Society and the University of Barcelona.

Previous digs in Oxyrynchus have unearthed temples dedicated to Osiris, the Egyptian god of the afterlife, but the exact nature of the latest discovery has left the experts baffled but excited.

Padró described the underground stone structure as "incredibly good, but we don't know what it is".

Over 45 tonnes of rock was moved to get at the hidden treasures, in a meticulous operation overseen by an architect and an engineer.

Once inside, the archaeologists found "five or six coats of paint on the walls, the last of which was from the Coptic period of the first Christians."

Among the plant motifs and inscriptions was something special -- the "figure of a young man, with curly hair, dressed in a short tunic and with his hand raised as if giving a blessing," according to Padró.

"We could be dealing with a very early image of Jesus Christ," he added.

The figure is under protection while a team begins to translate the inscriptions surrounding it.

Archaeological work in the area is continuing as there has still not been time to excavate another unidentified structure connected to the tombs via a set of very worn steps.

"We don't know what we'll find there," said the Egyptologist.