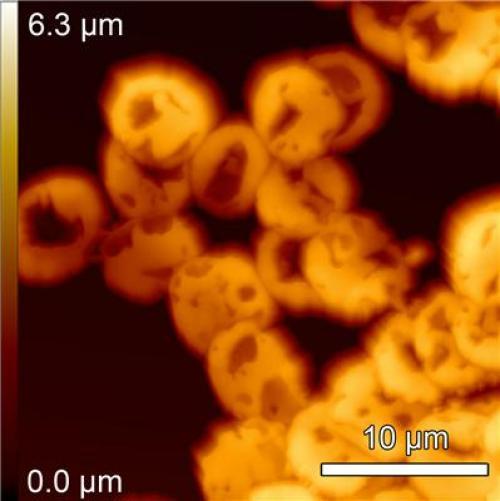 After decoding the Iceman's genetic make-up, a research team from the European Academy of Bolzano/Bozen (EURAC), Saarland University, Kiel University and other partners has now made another major breakthrough in mummy research: using just a pinhead-sized sample of brain tissue from the world-famous glacier corpse, the team was able to extract and analyse proteins to further support the theory that Ötzi suffered some form of brain damage in the final moments of his life.

Two dark coloured areas at the back of the Iceman's cerebrum had first been mentioned back in 2007 during a discussion about the fracture to his skull. Scientists surmised from a CAT scan of his brain that he had received a blow to the forehead during his deadly attack that caused his brain to knock against the back of his head, creating dark spots from the bruising. Till now, this hypothesis had been left unexplored.

In 2010, with the help of computer-controlled endoscopy, two samples of brain tissue the size of a pinhead were extracted from the glacier mummy. This procedure was carried out via two tiny (previously existing) access holes and was thus minimally invasive. Microbiologist Frank Maixner (EURAC, Institute for Mummies and the Iceman) and his fellow scientist Andreas Tholey (Institute for Experimental Medicine, Kiel University) conducted two parallel, independent studies on the tiny bundles of cells. Tholey's team provided the latest technology used in the study of complex protein mixtures known as "proteomes." The various analyses were coordinated by Frank Maixner and Andreas Keller.

The protein research revealed a surprising amount of information. Scientists were able to identify numerous brain proteins, as well as proteins from blood cells. Microscopic investigation also confirmed the presence of astonishingly well-preserved neural cell structures and clotted blood cells. On the one hand, this led the scientists to conclude that the recovered samples did indeed come from brain tissue in remarkably good condition (the proteins contained amino acid sequence features specific to Ötzi). On the other hand, these blood clots in a corpse almost devoid of blood provided further evidence that Ötzi's brain had possibly suffered bruising shortly before his death. Whether this was due to a blow to the forehead or a fall after being injured by the arrow remains unclear.

The discoveries represent a major breakthrough for the scientists. The research team emphasised that "the use of new protein-analysis methods has enabled us to pioneer this type of protein investigation on the soft tissue of a mummified human, extracting from the tiniest sample a vast quantity of data which in the future may well answer many further questions." While many DNA samples from mummies are difficult or impossible to analyse because of natural biological decay, one can often still find proteins in tissue samples which allow a closer analysis and provide valuable information, explained Andreas Tholey: "Proteins are the decisive players in tissues and cells, and they conduct most of the processes which take place in cells. Identification of the proteins is therefore key to understanding the functional potential of a particular tissue. DNA is always constant, regardless of from where it originates in the body, whereas proteins provide precise information about what is happening in specific regions within the body." Protein analysis of mummified tissue makes an especially valuable contribution to DNA research, Maixner added: "Investigating mummified tissue can be very frustrating. The samples are often damaged or contaminated and do not necessarily yield results, even after several attempts and using a variety of investigative methods. When you think that we have succeeded in identifying actual tissue changes in a human who lived over 5,000 years ago, you can begin to understand how pleased we are as scientists that we persisted with our research after many unsuccessful attempts. It has definitely proved worthwhile!"

The results of this joint study are published in the journalCellular and Molecular Life Sciences. Along with a sample taken from the Iceman´s stomach content, more than a dozen tissue samples from less well preserved mummies from all over the world will be submitted to this new protein-based research method and should provide insights which previously had not been possible.