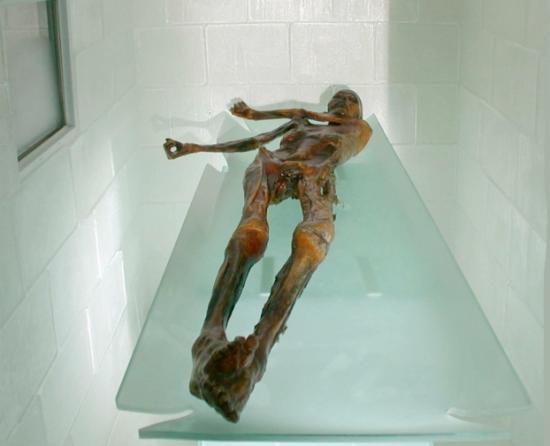 Ötzi the Iceman in his new cell at the South Tyrol Museum of Archaeology in Bolzano. Strictly copyrighted: Museo Archeologico dell’Alto Adige - www.iceman.it

Exactly 20 years ago, on Sept. 19, 1991, German hikers Erika and Helmut Simon spotted something brown while walking near a melting glacier in the Ötztal Alps in South Tyrol.

As they got closer, they realized with horror that it wasn't just some sort of rubbish: a human corpse was lying with the chest against a flat rock.

Only the back of the head, the bare shoulders and part of the back emerged from the ice and meltwater.

The hikers thought the body belonged to an unfortunate victim of a mountaineering accident a few years back. In fact, they discovered one of the world's oldest and best preserved mummies.

To commemorate the 20th anniversary of this sensational discovery, here are 20 known and lesser known facts about the Neothiltic frozen mummy.

1. An incredible chain of coincidences allowed the Iceman to remain intact: he was covered by snow shortly after his death and later by ice; the deep gully where the Iceman lay prevented the body from being ground up by the base of the glacier; the body was exposed to damaging sunlight and wind only for a short time in 1991 between the time the mummy thawed and the accidental discovery.

2. It was an Austrian reporter, Karl Wendl, who first named the mummy "Ötzi," referring to the Ötzal Alps where it was found. According to a resolution by the South Tyrol Provincial Government, the official name for the mummy is "Der Mann aus dem Eis" -- "L'Uomo venuto dal ghiaccio" (The man who came from ice).

3. Soon after the mummy was recovered, a harsh controversy arose on which soil -- Italian or Austrian -- it was found. A survey of the border carried out on Oct. 2, 1991 established that the mummy lay 303.67 feet from the border in South Tyrol, in Italy.

5. Recent investigations established that he had brown eyes, not blue as previously thought.

6. Ötzi was probably a bearded, furrow faced man. He was about 5 foot, 3 inches tall and weighed 110 pounds.

7. He lacked a twelfth pair of ribs -- a rare anatomical anomaly.

8. The Iceman had a remarkable diastema, or natural gap, between his two upper incisors. He also lacked wisdom teeth. Even though he suffered from cavities, worn teeth and periodontal diseases, he still had all his teeth when he died at around 45.

9. Ötzi could have been a little better endowed. The man's natural mummification and dehydration in the Alpine glacier produced a "collapse of the genitalia," which left the Iceman with an almost invisible member.

10. The Iceman's last meal probably consisted of a porridge of einkorn, meat and vegetables. Researchers are still investigating the sampled material to determine the exact nature on the Iceman’s last meal.

11. Three gallbladder stones were recently found which, in combination with the previously identified atherosclerosis, show that Ötzi’s diet may have been richer in animal products than previously thought.

12. The Iceman's stomach also contained 30 different types of pollen, which ended up there with the food he ate, the water he drank and the air he breathed. The pollen showed that he died in the spring or early summer.

13. Analysis of the isotopic composition of Ötzi's tooth enamel and bones suggest that the man was born and lived in what is now South Tyrol. He probably spent his childhood in the upper Eisack Valley or the lower Puster Valley. He lived at least ten years in the Vinschgau prior to his death.

14. Among the clothing and items found with the mummy, one of the most important pieces is the copper-bladed axe. Archaeological experiments showed that the axe could fell a yew tree in 35 minutes without sharpening.

15. Ötzi's body is covered with over 50 tattoos made with fine incisions into which charcoal was rubbed. In the shape of lines and crosses, they were probably used as pain-relieving treatments. Indeed, the tattooed areas correspond to skin acupuncture lines, which predate acupunture in Asia by two thousand years.

16. Many theories have been proposed on Ötzi' social status. Among the various theories, the Iceman was identified with a shaman, a mineral prospector looking for ore deposits in the mountains, a hunter, a trader, a shepherd, and a man banished from his community.

17. The Iceman had been involved in a fight shortly before his death. He was shot with an arrow which pierced the subclavian artery and also suffered a blow to the death just before dying.

18. Ötzi's belonged to the European genetic haplogroup K. He was probably infertile.

19. Ötzi's constitution was athletic. He was more a wanderer than a manual worker. Recent research by Albert Zink at the EURAC Institute for Mummies and the Iceman in Bolzano, found signs of enthesopathy (an inflammatory disease of bone attachments) in the knees, which indicate that the Neolithic man spent many hours wandering in the mountains.

20. Claims of a Tutankhamen-style curse refer to seven strange deaths which occurred just a couple of years after German hiker Helmut Simon and his wife Erika discovered the frozen mummy. The seven dead people were either involved in the recovery of the mummy or in the scientific investigation. One of them was Helmut Simon, whose body was found trapped in ice in 2004, just like his famous find.

In reality, hundreds of individuals have worked on the Iceman project. Although sad, it's not so peculiar that some of those people have died since the mummy's discovery.