The word sultan derives from an Arabic word meaning authority or power, particularly the strength, authority and position of a ruler or dictatorship. It was first used in the Abbasid period but not to signify the ruler, rather men of lesser importance but still wielders of power. 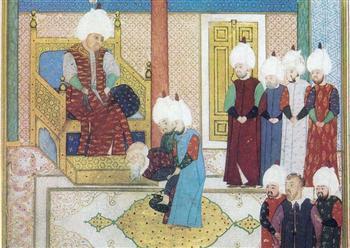 “… the son of Sultan Murad, son of Sultan Mehmed Khan, the sultan of the lands and the emperor of the seas, the shadow of God extending over men and djinn, the deputy of God in the East and the West, the champion of the water and the land, the conqueror of Constantinople and the father of that conquest Sultan Mehmed…” is how Fatih Sultan Mehmed is described in the inscription above the gate (Bab-i Humayun) leading into the first courtyard at Topkapı Palace. The Ottoman ruler wasn’t just plain “sultan”; he had acquired a whole series of attributes to emphasize his importance.

The word sultan derives from an Arabic word meaning authority or power, particularly the strength, authority and position of a ruler or dictatorship. It was first used in the Abbasid period (750-1258) but not to signify the ruler, rather men of lesser importance but still wielders of power. The Seljuk Turks however did use the word for their rulers when they had conquered the Middle East (1037–1194) and much of Anatolia. There has been some debate among historians over when the Ottoman Turks applied the word sultan in documents; however, Fuad Köprülü seems to have settled the issue by attributing its use to Yıldırım Bayezid (1354 – 1403) in two documents written in his time. Still Ahmet Refik Bey, citing other sources, insisted that the reign of Çelebi Mehmed (1413-1421) as the first time when “sultan” was used, although he admitted that it had been previously used in various places from time to time such as on Bayezid’s mausoleum. The whole argument takes up several pages in Mehmet Zeki Pakalın’s “Tarih Deyimleri ve Terimleri Sözlüğü,” if you’re interested.

The first time that the word sultan was used on Ottoman coins was on a copper coin minted by Murat I (r. 1362–1389). There were two elements necessary to demonstrate that one held power in the Islamic Middle Eastern world: one was by having one’s name read out in Friday prayers, the other way was by having the right to mint coinage in one’s name.

The title of khan was a traditional one that emphasized the continuity of the Ottoman Empire with its Central Asian roots. The word apparently comes from Çağatay Turkish or possibly the Tatars. It was regarded as the equivalent of padişah and seems to have been a reminder to the Ottoman Turks of where they came from. It appeared on coinage as early as that of Çelebi Mehmed.

The Ottoman rulers also used a Persian title, padişah (shah of shahs) and this seems to be interchangeable with the title sultan. According to Gibb and Bowen in “Islamic Society and the West,” padişah was the title more commonly used. Unlike the title sultan, historians don’t seem to have been as concerned about establishing its first use for an Ottoman ruler. One could speculate that the adoption occurred after the first time an Ottoman ruler defeated an Iranian shah.

As for the title caliph, Sultan Selim I took the title after conquering Egypt in 1517. It had been the title of the last of the Abbasid rulers, Al-Mutawakkil III who was captured together with his family. They were taken to Istanbul, where he formally surrendered the title to Selim. By this time however the caliph no longer wielded political power; it had become a means for the Mamluke sultans in Egypt to legitimize their rule since the caliph of the time would issue a diploma granting them the right to it.
Although Ottoman rulers assumed use of the title exclusively, they weren’t addressed by any of the forms of address that applied to the caliph such as imam. Nor did they concern themselves with religious matters directly unless there was a direct threat to their rule. Instead they appointed a “şeyhülislam” to adjudicate religious affairs. At the same time they were not the Commander of the Faithful (Amir ul-Mu’minin), that is, acknowledgement of their right to the title of caliph extended only as far as their political power stretched; their reach was not universal. The same terms of address that could be used for the Ottoman sultan as caliph were used to describe one of the Mughal rulers of India.

Holding the title of caliph did oblige the sultan to uphold sharia law and the Ottomans were conscientious in doing this. Gibb and Bowen conclude from this that “the general conception of the powers and functions of the monarchy was but little affected by Islamic ideals. The Seljuk Turks had been thoroughly indoctrinated with Persian prinicples, which fit in well with Turkish views based upon the military-style organization of their tribal system, a feature that was passed down to their succesive Ottoman rulers. The main function of the ‘World-Creator’ – hünkar, one of the favorite titles of the Ottoman Sultans – was to keep the world on its axis by seeing that his army was paid and that no class of his subjects trespassed upon the rights and duties of any other class. The weaker the personal authority and influence of a Sultan, the more rigidly he was held to the strict observance of traditional customs and usages.” The authors here are not referring to religious customs and usages but secular ones, although this may be why the Ottomans were more assiduous in upholding sharia law as their power grew weaker over the centuries.

Until the eighteenth century however the Ottomans successfully expanded their empire into the Balkans, at times losing a lot of ground. The battle at Petrovaradin (modern Serbia) in 1716 resulted in a disastrous defeat for the Ottomans at the hands of the Austrians, however it marked the furthest northern point that the Ottomans were able to march. From then until the Treaty of Passarowitz in 1718 they continually lost ground to European forces and while they made somewhat of a recovery, it was only temporary. Of particular importance however was that until this juncture Ottoman sultans had insisted that they were superior to the rulers of European nations. They had insisted on being called padişah but with their being defeated, they were forced to acknowledge that the Austrian emperor was also a padişah in the Turkish versions of the various treaties signed. The Ottoman padişah was no longer the one and only.