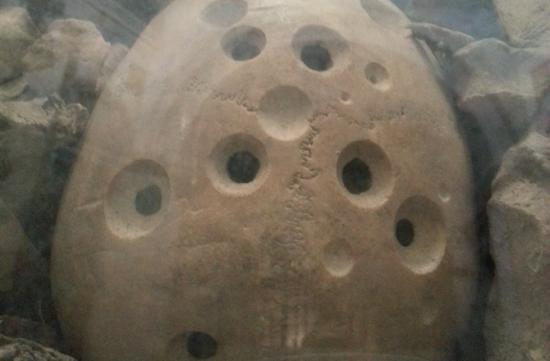 Researchers at the University of Pisa, Italy, have solved a longstanding mystery around the honeycombed skull of one of the Italian martyrs beheaded by 15th century Ottoman Turk invaders when they refused to give up their Christian faith.

Featuring 16 perfectly round holes of various sizes and depth, the skull belonged to an individual who was executed on a hill outside the town of Otranto in Apulia along with more than 800 other men.

The skull was later drilled, most likely to obtain bone powder to treat diseases such as paralysis, stroke, and epilepsy, which were believed to arise from magical or demonic influences.

Beatified in 1771 and canonized by Pope Francis on May 12, 2013, the so-called "martyrs of Otranto," whose identities are largely unknown, are now the patron saints of the city of Otranto.

They all met their ends on Aug. 14, 1480, following a 15-day siege by the Ottoman force commanded by Gedik Ahmed Pasha. During the assault, all Otranto men over the age of 50 were slaughtered, while women and children under the age of 15 were either slain or sold into Albanian slavery.

The remaining men, including more than 800 exhausted survivors, were told to convert to Islam. As they refused, they were taken to a hill and beheaded one by one.

The remains of the martyrs are now impressively exposed behind five large glass cabinets in the Cathedral of Otranto. In particular, the skulls are meticulously lined up in horizontal rows, with the facial bones turned toward the visitors. 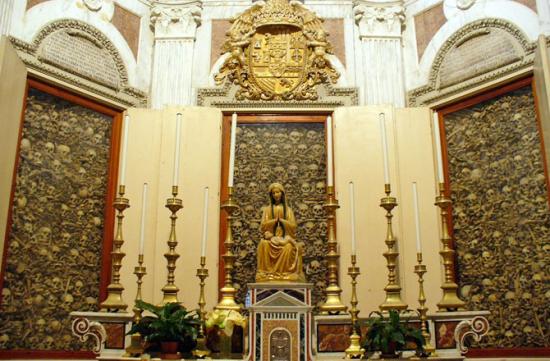 The remains of the martyrs are now impressively exposed behind five large glass cabinets in the Cathedral of Otranto. LAURENT MASSOPTIER/ WIKIMEDIA COMMONS

However, in a low row of the central window, a skull is positioned with the face toward the ceiling and the cranium facing visitors.

"The specimen was probably arranged in this manner so as to show a series of holes on the cranial vault," Gino Fornaciari, professor of history of medicine and paleopathology at the University of Pisa, and colleagues wrote in the February issue of the Journal of Ethnopharmacology.

Although the window could not be opened and so the skull could not be removed for study, the researchers noted that the holes featured a regular, rounded shape.

Of the 16 holes, eight turned out to be complete perforations, involving the bone in all its thickness and producing a rounded, conical-shaped hole. The edges featured rounded walls.

"The perfectly cupped shape of the incomplete perforations leads(us) to hypothesize the use of a particular type of trepan, with semi-lunar shaped blade or rounded bit; a tool of this type could not produce bone discs, but only bone powder," Fornaciari said.

This would make the Otranto skull a unique piece of evidence supporting historical accounts on the use of skull bone powder as an ingredient in pharmacological preparations.

"The finding is particularly interesting because of its religious context," Fornaciari told Discovery News.

Powdered skull bone obtained from saints or individuals who died a violent death and were not buried, such as the martyrs of Otranto, was believed to be particularly effective and prescriptions appear already in the Late Middle Ages.

"The head was considered the most important part of the human body. It was believed that right there invisible spiritual forces remained active even after death," Valentina Giuffra, from Pisa University's division of paleopathology, told Discovery News.

Indeed, in his Pharmacopée universelle, a comprehensive work on phamaceutical composition, French chemist Nicolas Lémery (1645 –1715) detailed how powdered human skull drunk in water was effective to treat "paralysis, stroke, epilepsy and other illness of the brain."

"The dose is from half scruple up to two scruples," Lémery wrote.

"The skull of a person who died of violent and sudden death is better than that of a man who died of a long illness or who had been taken from a cemetery: the former has held almost all of his spirits, which in the latter they have been consumed, either by illness or by the earth," he added.

According to Fornaciari, trepanation in the Otranto skull was probably performed during the arrangement of the bones in the cathedral’s glass cabinet, which took place in 1711.

The reason why that particular skull was chosen to obtain the bone powder will remain a mystery.

"There are no elements to consider this skull as belonging to a martyr of particular interest or importance," Fornaciari said.